At least Derick Carr did something at the end of the game. Fucker almost left me with no points.

I wrote that yesterday because I treated my Saturday as a workday. And it paid off. I should treat more days like that. I seriously simply don’t do much in many days because of writer’s block. Or so I like to blame it.

Force myself to work.

Without a fear of rejection.

That’s what I’m doing this week too.

I seriously will finish that piece.

And hopefully, write more than just one big piece.

The publication, the Santa photo shoot, and another published piece they owe me = I’ll be fine for the holidays. Not that worried as I was a few days ago.

Also… the Red still owes me money for something they published months ago.

They should pay me before the year ends… It’s been since August and they don’t pay.

I got a nice email from a stranger who reads this blog. Thanks for reading Susann. Sorry, I don’t know much about the fires in the area.

I wrote a story about a fire in Tijuana and the editor simply told me “we don’t cover fires.” 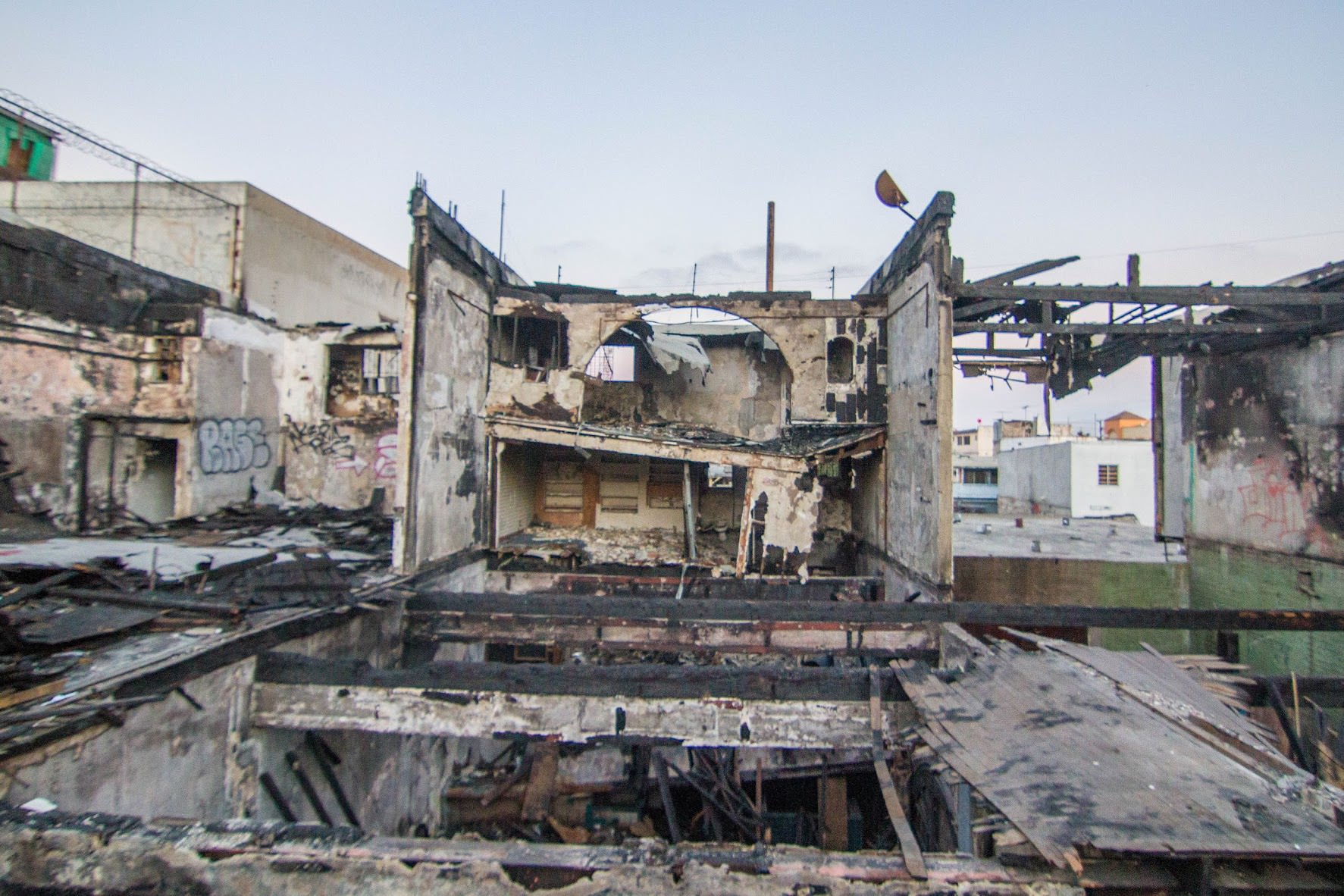 So since then, I don’t really pay attention but for my own safety and not really look into it much.

I just had a photo shoot with Bisho as Santa.

He hated every second of it.

And it wasn’t that good. 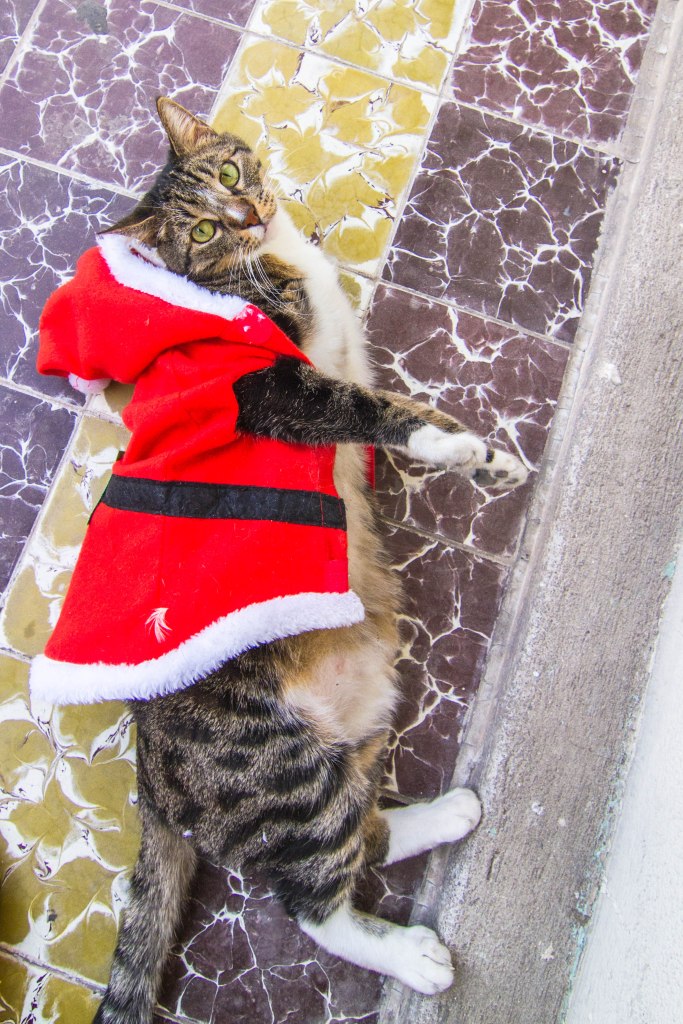 Him looking at me like… please take this shit off. 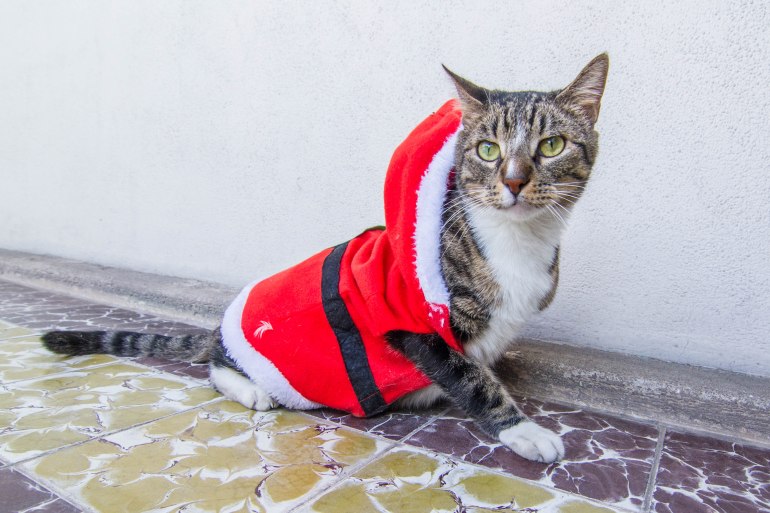 If I put the hood on his head, he would freak. So I stopped doing that.

Also, took pictures of the condition of the apartment. Since I have a new landlord and I pay rent today (or soon). I have some demands. Especially because it’s shit they were supposed to fix forever ago. And now my mom is going to be living here. And they’ve been fixing the apartment next door. It looks nice. I think they are even getting new kitchen cabinets. Which would be great in my kitchen.

Remove the floor and get a new one would be great too.

And fix the fucking windows.

That would be the best…

Do all that… Fix the balcony as well.. and the roof.

The price is at is actually somewhat overpriced…

This place needs some fixing.

I mean… look at this shit. 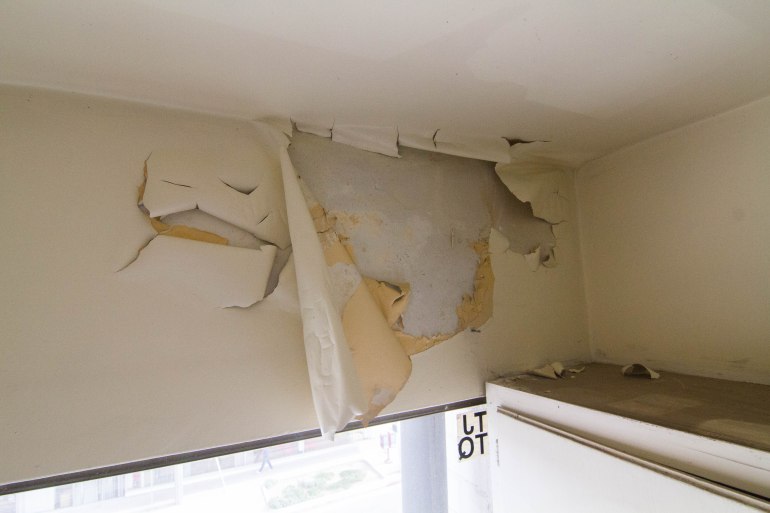 And I would be living in the penthouse.

Hopefully at this time next year.

For around that price. $500 would be good. Less than that would be ideal.

That penthouse still needs some fixing. Though it has been fixed throughout the years… throw some cash into and it could still be even better.

Them balconies are falling apart.

And it could be a bit more secure.

Voodoo Stu is back.

I haven’t said hi to them.

Friday I slept all day.

Today… today it’s supposed to be the special.

He hasn’t posted what the special is.

I wonder what the special is…

I hope he is open.

Because I invited my mom for dinner there.

The rest of the day is NFL and laziness. I will probably watch the last game at Nelson. Come home early. Pass out early. Get ready for the week.

Yesterday… I paid the internet. Waited forever in the ATM. And because I am low in money and haven’t been working, I was trying to not spend money… Sort of depressed. Looking for distractions. Hating everyone. Hating everything.

Their Poolhouse Pale Ale is a simply good beer. Very drinkable. Simple. Crisp. Not too hoppy.

One more beer and bed was the plan.

I stopped by Teorema/Lúdica.

It was good but not my favorite at all.

Very syrupy caramel tasting. Not very high alcohol taste which rescues the beer. But no dryness. No hoppiness. Won’t be getting it anymore.

They need to bring the Gose back.

I would make an awesome tap room.

That beer wasn’t the last beer.

I saw the owner of Cine Tonalá on the street. She owes me a burger since forever ago, but I had already eaten. Instead, she got me a few drinks.

Got their maracuya with mezcal because it’s their best drink (next to their Gin Saavedra). I told Adriana I wasn’t very fond of the old-fashioned I ordered months ago. The drink was tiny and not very well made.

They presented me with a way better old fashioned, but still not great and with Wild Turkey. I could have subbed for Makers Mark. It was missing a cherry.

I like single big cube or ball of ice, this drink had several ice cubes. The sugar wasn’t properly muddled…

But it was good. And it was free, which made it way better. They have their old-fashioned for around $7 I believe… which is still pricey. Especially for a meh one.

Their mezcal drink and the Gin Saavedra is way better.

Free drink is a free drink goddammit and I can’t bitch about it.

Adriana invited me to bitch about it.

I felt bad for criticizing a good free drink (but hey, I be bitchy).

A chef sat with us. The guy that used to be in Caza Club. I wanted to say something good about Caza Club but was there only once with a tour and I remember we were okay with it. Not crazy.

He was a cool guy though.

Adriana got busy accommodating guests. A table of Norwegians and Swedes sat near us. The other table had people from London and bullshit.

Being all international and nice.

And Cine Tonalá added such new class to downtown. It’s not longer only Caesar’s. Competition is going to be fierce soon.

Tequila shot and chef wanted to go out for a cigarette. Since Adriana got busy. I joined him.

Caguamas at the back of Chips and suddenly time did not exist.

We went back to Cine Tonalá.

I was tired and drunk. Dardin and Omar were playing a tribute to Kraftwerk. Which outside “The Robots” I don’t really know their songs much.

A Saturday Adventure solo. I missed those. Forgot how easy they are and how wild it can get immediately.

There was a party in the penthouse.

My roommate had a party of his own celebrating his anniversary.

I wonder what happened.