Amazing Weekend of Great Food, Drinks, Friends, Pictures, and Music – Beef Wellington from Caesar’s and New Teléfonica Review – Zigtebra and Lightworks Leave Much Love Behind (and They Are The Celebrity This Monday)

It was a great weekend.

On the top 10 of weekends of the year or so.

That would be an interesting challenge to remember.

Whenever friends join in to come and drink and do merry. It’s a great time.

And friends visit from all over.

But first. Some usual word vomit.

Yep. I skipped Sunday’s blog because it seems like I need a skip day each week. Yet, whenever I skip a day, I find it more ridiculous to come back and start writing. It’s not like I die if I don’t write this shit every morning, but I have been writing daily since the beginning of this year.

Except, Sundays now…. I should still write on Sundays. Because so much shit happens some weekends.

And I took shit tons of pictures.

I virtually forgot about my brother’s birthday until I realized it was my other brother’s wedding anniversary yesterday.

Then I remembered my brother’s birthday was today.

I’ve been so focused on my girlfriend’s birthday…

I get great ideas and then do nothing (sorry babe).

Two things are definitely done. I arranged private dinner plans with a chef here in Tijuana. And I got her some presents.

Many things that I wish I could buy for her are not happening (again, sorry babe).

And after my girlfriend’s birthday, it’s my great aunt’s birthday!

She was like my grandmother when I was a kid.

Distractions. I don’t want to work out. I’m tired. I have to get this week going. I have shit to do.

My friend from my hometown sent me his new reggae track.

Dude got married and now lives in France.

I really enjoyed the track despite my little interest in reggae.

CHECK THIS TRACK OUT.

I particularly liked the transition to cut time and back to double. I mean… the song is already SLOW and they slowed it down even more!

And it’s nicely recorded/produced. My friend basically did all the instruments you hear.

And that Saturday night with Zigtebra and Lightworks!

When Lightworks woke up from their nap, and we were ready to go, my girlfriend got home from work. She then proceeded to nap because it was going to be a long night. I also needed a nap. It never materialized. And I started drinking with the guys since 2 pm.

One of the Lightworks crew was going to cross the border and not stay for the show. We gave him a quick tour of Tijuana, drank some beers at Nelson, and took him to the border.

The guys from Zigtebra were about to cross the border. But due to some parking difficulties and other crap, they were delayed.

I waited almost an hour, and I was ready to bail… when I finally saw them coming into Tijuana.

Rendevouz at Nelson. Can’t believe the guys were still waiting for me there.

Then off to get some food at Colectivo 9!

Back to the house to get settled. Some drinks. More hanging out. Tequila shots. Friends. Great times.

Grab the instruments. Grab my camera. And off to the show!

I missed the Gallos vs Tigres game. But I did check on my phone and saw it was a 1-1 draw.

The show had a low attendance, but the important people were there. And by important people, I mean some of my friends. Yep, other Tijuana friends showed up to support Lightworks.

The first band were teenagers in what I think was their first show ever.

Not sure what they are called. If they keep playing, they might get somewhere interesting. But meh. Lead guy was good but needs more confidence. And drummer needs to chill the fuck out. You are not a metronome dude. I mean, you are, but enjoy it.

Actually. The whole band. You are doing it because it’s fun. You should look like you are having fun. That’s my biggest advice for them.

But again, they were really young. So it’s understandable.

The Zebra part of Zigtebra, Emily, looking happy before the show!

There was another show going on next door and the noise filtered in. Both shows had a low attendance.

The other band, Never Young, from Oakland.

But not really my cup of tea (pop punk).

Some riffs were pretty cool. But meh.

I’m listening to them on Youtube now and it sounds nicer and cleaner. The voice didn’t sound like that at the show.

My girlfriend looking pretty during the show.

And then the half brother/sister duo from Chicago! 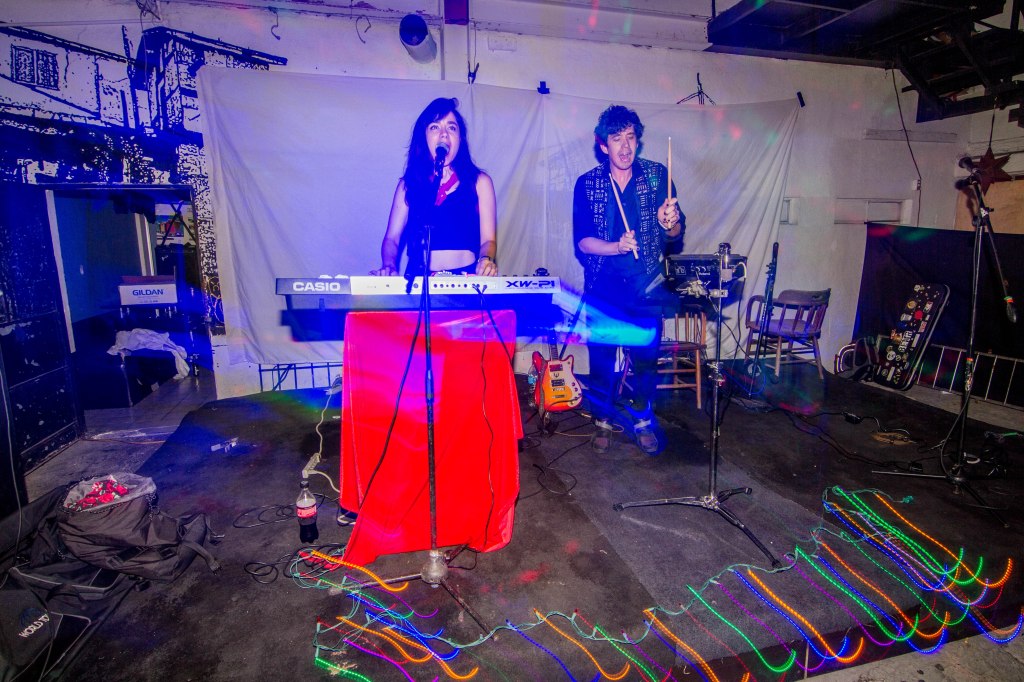 My guitar looks pretty on the Tiger part of the band (Joe borrowed my Japanese Ephiphone).

And with the flash again!

They played a short set. Or at least it felt short to me.

At least they played my favorite song and dedicated to me and my girlfriend.

Well, I have a new favorite from them, but they didn’t play it.

Too bad for the low turnout.

Zigtebra now continues their tour. They will be in Eugene, Seattle, and Philadelphia and more soon!!!

They are also putting out a new video each month. This is their latest.

They do all of that while on tour. Shoot the video on iPhone, edit on iMovie. It’s amazing work for the super low DIY production.

Lightworks was up next.

Flash pictures were not flattering for his show at all. So I switched it just super dark low settings. 6400 ISO at 2.8f and around 100 shutter speed is not ideal.

But here are some rescuable shots.

Part of the show is the visuals. Victor hits video switches at the same time as the beat. It really adds a nice touch that you never really think about.

And Lightworks jumping around and dancing to his own music is contagious.

He needs to let his fro grow bigger because the bounce gave him a lot of power.

Visuals really kill it. I need a better lens for low light.

The show ended early. And I was tired. And I had been drinking a lot.

I called an Uber home and headed back with the Zigtebra guys.

Lightworks decided he wanted to play a second show and he was going to call me later.

Apparently, the mother fucker, impromptu played another show in the bar next door. The sound was better. The turnout was better. He got free drinks for his crew. And it was a major party.

Fuckers didn’t even come to the apartment until 5:30 am.

Both parties left around noon to cross the border.

Their Tijuana Adventure over.

They left leaving much love. Zigtebra left me with a six pack of Lagunitas. It warmed my heart because if you want to give me something, and the gift is beer, it’s super special. And they knew it.

I’ll see you guys again next year. Or maybe sooner. Or who knows. But love y’all.

I already have over 1,000 words, I haven’t gotten to what happened yesterday, and haven’t even thought up my work week yet.

Workout. I need to. Get this fucking week started.

You know I’m skipping it.

Zigtebra and Lightworks are the celebrities this time.

After the guys left leaving much love behind, we were starving.

We decided to take a long ass walk to the new Teléfonica.

The new place is better than I thought. It’s quite amazing!

It has all the old places with a few new ones. But it’s not only the food that is great, it’s the space.

They installed their own brewery and selection is vast. It’s pricey for Tijuana. But it’s great beer.

The new place also includes several free games, a library coffee/shop setting, one of those gigantic ridiculous tables and chairs, an upstairs veranda, another second floor that is under construction, and the best part… gigantic hammock net thingy for only adults with a TV mounted on top and cup-holders for your beer while you just chill on the net and snuggle.

That’s what my girlfriend and I did for a while.

I almost took a nap there.

I got the Montecristo sandwich by Azarosa because it’s fucking heaven.

It was about perfection, except the ham was a bit crusty on the edges. Tiny tiny tiny mistake that I didn’t mind. It’s some damn savory that who cares. It’s definitely my favorite thing for brunch.

Now I want one.

I accompanied that with a tart white peach beer from I forgot who. It was really good, but the wrong choice. I was hungover and it made me want to barf a bit…

Hammock for almost an hour doing nothing. And then we left for more walking/adventures.

Mercado Hidalgo didn’t have the cheese she was looking for. We didn’t get anything. I was tired. I wanted home.

And after a while of watching TV we got hungry and went out to eat again.

Undecided, we just headed out. I had a hunger for steak/meat. She just wanted to eat chiles.

Let me treat m’lady to some classy shit.

That’s how you get classy.

By swearing a shit ton.

She seemed concerned about money because I always complain about it. Caesar’s is not that expensive. It’s actually really cheap in dollars. And I make dollars. I just need to make way more dollars.

Got an Old Fashioned, she got a nice cabernet from Casa Magoni.

I knew so well what I wanted before even opening the menu.

She just wanted chiles toreados (which are not on the menu…)

She decided for champiñones al ajillo (garlic and chile mushrooms) and some chiles toreados (they did have them).

And my beef Wellington…. well shit.

It was my first time eating beef Wellington and I had been craving it forever.

I didn’t take pictures because there is barely any light inside the restaurant and flash pictures do not do the food any justice.

I DID! HOWEVER! Videoed it for Instagram stories because for some reason I like doing those little fucking shits. Fucking 2017 fucking bullshit shit. But I like it.

I also learned that if you tag the location of a place, it shows in other people’s feeds that don’t follow you but just follow the location. This would be a major advantage for shops and easy promo. Instagram is smart.

Here are screen caps of the food and drinks.

Old Fashioned and some wine.

The beef Wellington cut open in half. Yes. It’s fantastic. Barely had to even chew the meat. The sauce inside the breading is great. And it came with thick delicious gravy.

The veggies on the side were also very nice (girlfriend stole half of those away and that’s fine).

First time eating beef Wellington. I loved it. I will be going back for more.

Fuck. Now I got hungry for that.