Feeling Better, But Ego Hurt – On the BRATY Diet (No Beer or Coffee) – They Stealing Mah Pictures

But yesterday. Yesterday was a fucking disaster.

I don’t know what hurt more. My stomach, or that I wrote a post about my diarrhea. A hit on my ego for being a 31 year old who shit his pants while he was asleep. At least I wasn’t very explicit. But the SO obviously had to find out. It is worse than what you imagine.

Not that bad. But yeah.

So you could imagine that yesterday I had trouble sleeping….

And what a wonderful girlfriend I have. I don’t know what I did to deserve her. I’m not even sure if I deserve her.

I was pampered through and through. And it is probably the reason of my well being.

I’m still not completely cured. But I feel much better. You know how I know? I’m craving tacos and beers again. But I can’t. I need to be careful.

After all, I’m probably really sick from my gluttony. Like seriously, holy shit, do I love being a glutton.

Unfortunately, being a glutton also rendered me those holy shits.

A punishment of some sort. For eating like a beast, taking pictures, and blasting it on the internet. Making everybody else hungry.

All I had to eat so far was some yogurt and some cereal. And a half-cup of coffee (couldn’t help myself, I need it or else I wouldn’t be able to even wake up). I’m craving tacos. Shrimp mother fucking tacos.

I’m going to go eat a banana instead.

I write as if I was some sort of lard-ass. I’m still a very skinny person. If it wasn’t for great genes (I’m guessing) I would be overweight. With my horrible diet and my “sort of workout” doing around 50-80 push-ups a day, claiming I did 100.

Well… okay. Not all fruits suck. Just many of them. Or the way we eat them if they are not prepared.

That banana sucked. Because it was just a banana. If I had it sliced, mixed with some blueberries, and some kiwis with some shaved coconut I would love the fuck out of that fruit. But it was just a fucking banana.

Now I want coffee. I shouldn’t. I need to be 100% better for later this week.

I had a meeting today, but I postponed it to Thursday. The meeting most likely includes drinking a beer or two, and I don’t think I drink until Thursday. I’m still very fragile. And how I crave tacos.

Besides that. I have a mission on Friday. Party in Gaslamp. Well… take pictures of people partying in Gaslamp.

I’m not sure what direction this is going, but things usually unfold nicely and things get done.

Speaking of things that unfold nicely and gets done is the story I sent. I sent it yesterday and haven’t heard back. Probably won’t for a while. Or who knows. That’s my own fault for not pitching a story.

I have to pitch stories soon and start working on things that will pay again soon instead of gambling. And as a freelancer, there are no sick days. So it’s not like I’m getting paid for the time I’ve been wasting on the couch watching Netflix.

My girlfriend just called me because she’s worried about me. She said I looked like a sad street puppy yesterday and she was worried I was still really sick. She also reminded me not to drink coffee, which is exactly what I crave right now.

I’m better. And by Thursday I should be 100%. If not… well fuck. I’m already better today, but if I don’t see much improvement by tomorrow, I probably need to go to the doctor. If I’m still fucked by Thursday, then cancel everything, I’m on sick mode.

I can’t afford to be on sick mode.

She’s also been meaning to bake them potatoes for a while. It’s the first time the oven gets used in the house.

See… I bought the stove/oven from a friend who had misplaced the oven racks. Oven racks are not that easy to find. I mean, who the fuck sells oven racks?! So we haven’t found them oven racks… that was enough of an excuse to not use the oven.

But nope. She wanted to use it. So she devised a way with the stove racks, to be used as oven racks.

And now she has plans for other oven meals. I’m sure they will be great.

And I didn’t leave the house at all yesterday. So obviously there are no pictures.

I was tempted to use some food pictures, but nah. How about this sunset picture I took in January 11, 2016.

This picture was taken from my Instagram from a Twitter profile called FelixFixx which seems to be a shitty fake profile. In turn, they took my photo from that shitty Twitter to use it in an article on the SanDiegoRed. Needless to say, they didn’t credit the right person. I commented on the page and on the editor’s Facebook that it is my picture, they said they would credit the right person, it hasn’t changed.

Sometimes I really consider watermarking my pictures. The above picture is great because it was a long exposure and that dog and that man didn’t move.

Let me find the original file and see the stats of that pic. 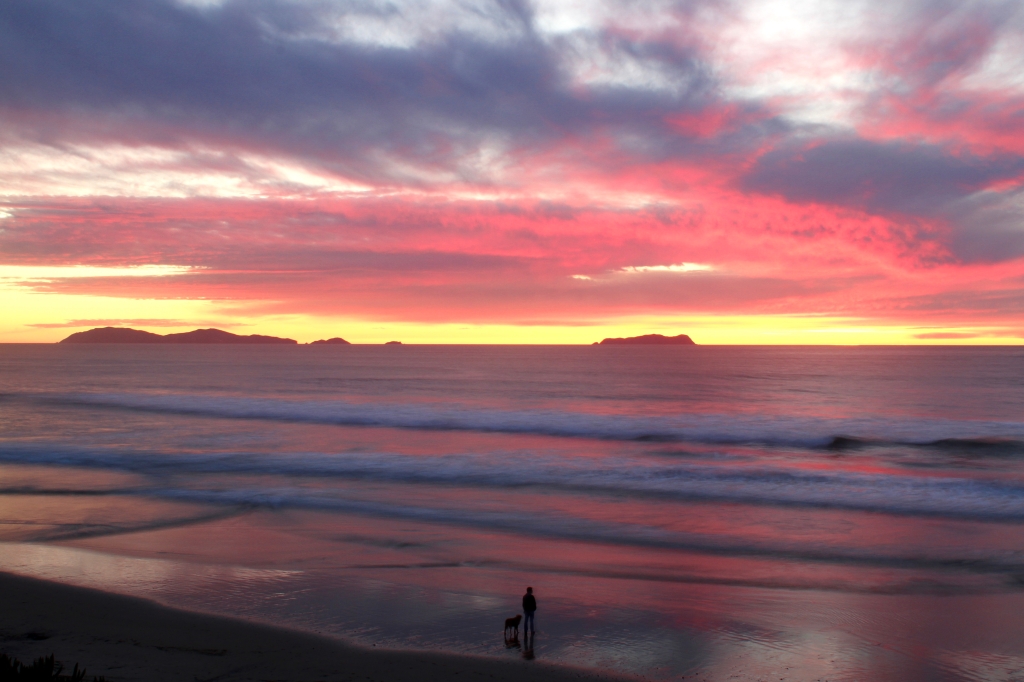 They are stealing my pics again!

Time to eat some toast cause I’m hungry. Yep. The T on the BRATY diet.

I really want some coffee.

And later some beer.

One response to “Feeling Better, But Ego Hurt – On the BRATY Diet (No Beer or Coffee) – They Stealing Mah Pictures”