We fought yesterday, basically after publishing my blog. It had nothing to do with the blog post. It was actually really silly.

We fought because all my clothes have holes in them and I wear shirts way too small for my size. And well… Though I am changing the way I dress to appease her (I retired many shirts with holes in them), it sometimes is too much when she wants to throw away ALL my clothes at once. I got angry…

Because I felt like blowing off some steam and not be in the apartment, I went to Bar Nelson (weird huh). She joined me because she didn’t want to be alone.

And there we also fought because she thinks I’m talented and great, and I’m very “meh” about that.

But after all the arguing, we ended up stronger (I believe)…

We took a long walk after that. I told her I was going to surprise her. And then took her to KFC.

Of course, I was lying.

The real restaurant was around the corner. Lion Fish. A place I’ve been meaning to try, but it’s not a place you go by yourself.

It’s basically like a Cevicheria Nais but in its own style. Like an upscale dining place for buchones.  They sell caguamas. It’s like pretend nice. But it’s cheap, and we both enjoyed it.

We got them oysters. 185 pesos which is roughly $10 for the dozen. I fucking love oysters. They were fresh. There’s not much to fuck up on oysters as long as they are fresh you can just slurp them fuckers down.

Then we split the salmon.

No picture, because she started eating it before I was able to take a picture. But it was also pretty good. I think it was 135 pesos for a nice filling plate with veggies and black rice.

We downed our seafood with Astillero IPA by Agua Mala. That beer that supposedly has over 120+ IBU but it’s not as hoppy/bitter as it pretends. It’s still fucking delicious.

After that, we went to El Tigre bar.  It was the bar’s 5th anniversary. There was a live ska band called Ciruela. Bucio (owner/partner) of the bar was there. He sent some beer samplers our way. So we drank those while we listened. Young band, young audience, not bad for being kids. I felt like a fucking grandpa while trying to make my way to the bathroom….

One more beer at Paralelo 28.

I haven’t visited that brewery in a long ass time and forgot how fucking good they are.

Yep. Another IPA in there. I forgot which kind, but they had 4 different IPAs.

Ubered home. And we passed out together.

That is Calamity Ganon…

I woke up around 4 am and couldn’t go back to bed.

Some fucker near a stable said, “why don’t you sneak into the castle?”

So I tried that. Even though I only had tamed 2 out of the 4 beasts….I snuck in.

It wasn’t easy, but it wasn’t incredibly hard to get in there. Just avoid some of them fucking ancients, kill some enemies, get some nice garb and BAM. Ganon.

Two Ganon’s that were easy enemies once you figure out how to hurt them.

Then the Ganon’s mixed thing gets angry and forms a gigantic CALAMITY GANON.

And this is where the tamed beasts come in. Because I only had 2 out of the 4, they blasted some laser thingy to what is supposedly the final boss (it might not be) and weakened it. But not enough. Not enough at all. Fucker was super strong and all my weapons were getting destroyed.

I still need to find the Master Sword. I know where it is. I just don’t know how to navigate Lost Woods.

Zelda is damn fucking good and there is still so much to play. I’m probably going to play all day since I’m still unsure of what to do about work.

I snuck into bed before her alarm rang for more cuddles before she goes to work. Then I slept some more. To wake up and play Zelda.

I tamed the third divine beast “Van Medoh” earlier today. It was actually a simple beast to tame. Or at least the riddle seemed easier than the other two. You could play the game however the fuck you want. Now all I’m missing is Gerudo Valley for the fourth beast and then more stuff. Endless stuff.

And the exploring is so much fun. It feels like I’m halfway there or a bit more. Yet so endless. Like a GTA in the wild with mountains like if it was Skyrim with Link mixed with Yorda (from Shadow of Colossus) and more.

Definitely… one of the best games ever.

In Rito Village every person is some sort of bird. Teba, the guy that helps you board the beast is a fucking dickhole. Then the champion soul “Revali” is also a huge dick. Just like Falco in Star Fox. A cocky fucking dick that at the end says “oh yes, you so much better.”

Now to my friend Bryan’s favorite part. A RANDOM CELEBRITY!

I’m kidding. He hates this part.

But this is why I have a blog. Because I was going to post celebrities until I turn into a blook. Now I just post a celebrity every Monday. Still for no fucking reason… (traffic)?

I fucking have no idea who Katie Price is. I just know she was some sort of British celeb. I should google her.

She’s some plastic looking chick and that’s all she does.

From Wikipedia “Her time as topless female glamour model in a pictorial Page 3 in British tabloid newspaper The Sun shot Price into the limelight.”

She kinda looks like the stripper one of the guys was heavily tipping on that bachelor party on Saturday.

Famous people are just strippers and they make shit tons of money. This world can be shit. And I helped it be shit because I took pictures of her.

Okay. So why her?

I was looking through my files just to see what I was doing 7 years ago and saw a folder with Joe Rogan. I don’t remember shooting Joe Rogan and I would because I’m a fan. And I don’t remember because the pictures are kinda shitty through glass and he didn’t even see me shooting.

The Katie Price folder was there on the same day on March 3, 2010. I also shot Cindy Crawford, Gerald Butler, Larry King, Michael Douglas, and Shia LaBeouf.

So why Katie Price?

Because this folder shows the bullshit that sometimes you had to deal with that job.

Everyone fucking finds out when a celebrity is on a flight from the UK or France to LAX.

These were my best pictures of Katie Price.

I didn’t plug in my hard-drive so I’m not sure if I ever saw her again. And… I don’t care. 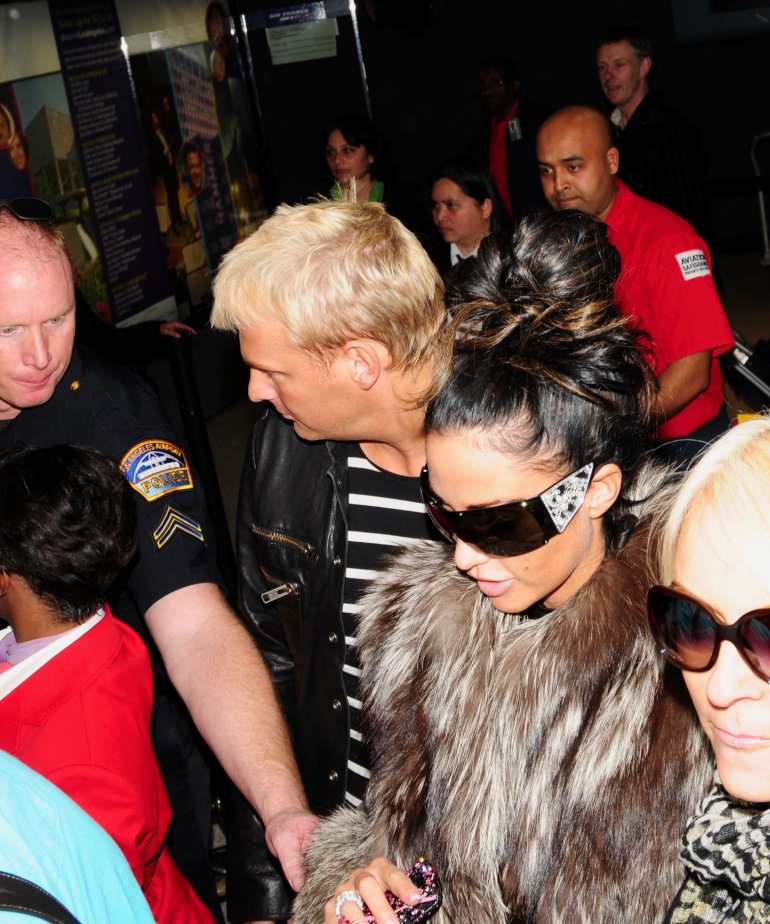 That cop is like “I want to touch her.” 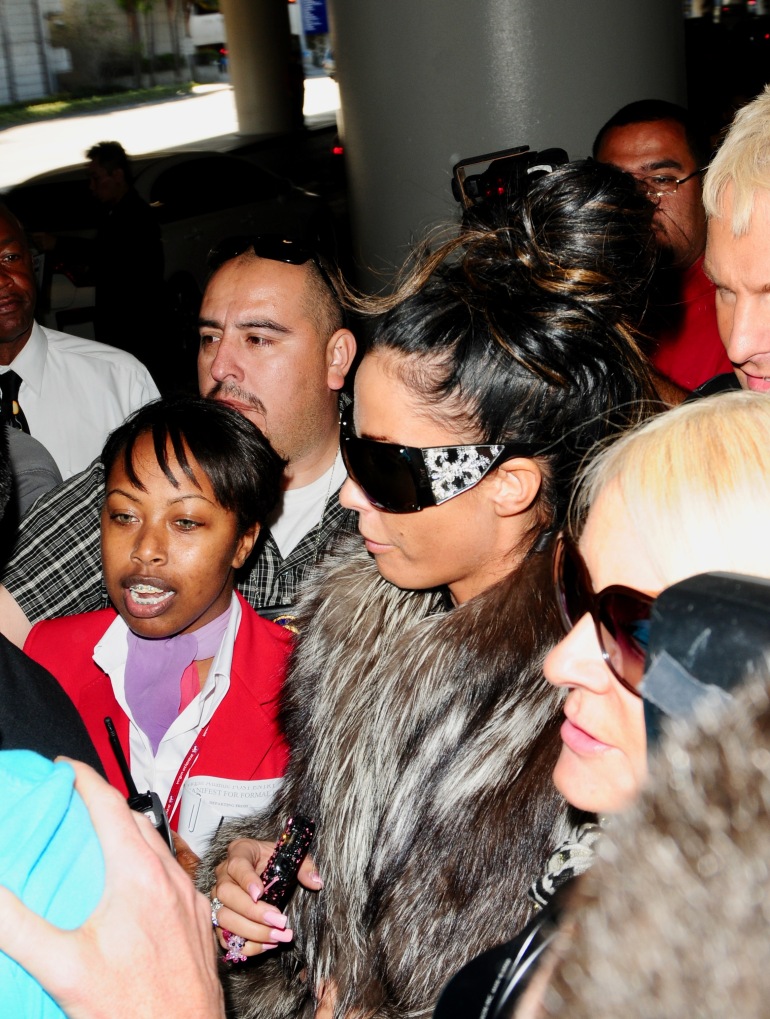 Inside her shitty car.

And another shitty side pic. You can see me on the reflection of the door.

Now… why did I do so shitty in that shoot?

Cuz my Nikon lens wasn’t very wide (it was a 24mm I believe).

Look at all the fucking photographers in there. Out of all the ones you see in the following pics, 3 were friends, just a few were cool, the rest I don’t give a fuck about.

And yes. That shit continues even when she is in her car. 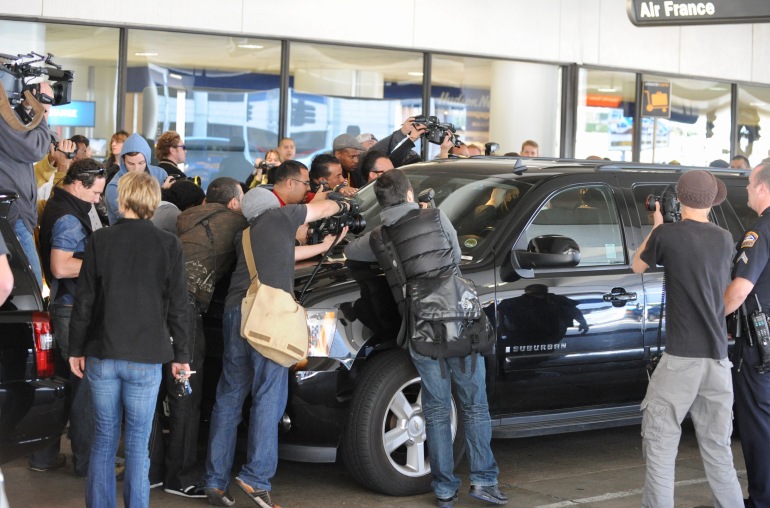 I hope this stupid shit doesn’t go on anymore. I’m sure the pics won’t even pay that much in today’s market. Or at least not for Katie Price. I still have absolutely no fucking clue who this plastic looking stripper is. Just the short paragraph I read on Wikipedia and looking up her naked pictures. Oh yeah. There are tons of naked pictures her. And probably a video or something?

I’m not going to search for that. Not worth it. It would be so much easier to go to the strip club….

I googled her some more.

She’s a mom of five and just recently got naked at a Christmas party and did stupid shit.

Why do people care about shit like this?! Fuck.

Oh well. I was getting paid to get pictures of stupid people so other stupid people could enjoy more stupidity and now I write stupid stuff on my blog for just fucks.

I’m going to go get food and keep playing Zelda and keep procrastinating non-existent work, student loans, driving for Uber, writing for money, or doing anything else.

I can’t do this forever…. but I’m going to try.