I woke up from a nightmare in the wee hours of the morning.

Like always, when I woke up, I remembered all the details. Instead of writing them, I told myself “yeah, you’ll remember them later.”

Of course I don’t. All I remember is that I was sleeping in my apartment, except it was a house, but pretty much the same layout + a patio. I woke up and my brother who I haven’t seen in years was standing on the edge of my bed. Someone else was there as well, unsure who. They were having a party in my house. I was mad. But I tried to play it of cool.

Then I realized my camera gear was gone. The rest of my dream/nightmare I was looking for my camera. Yelling at everyone in the party. Until a threw a hissy-fit and kicked everyone out. I remember I was going to feel stupid if my camera was in the house and not stolen. I looked for ages and couldn’t find it. It’s like a photographer’s worst nightmare. I had no idea what I was going to do for work, but I was determined to keep working. Fuck it. I’ll use my iPad. It’s what I was using before anyway…

Woke up. My camera is still next to my computer on my desk. Next to my Olivia Munn signed poster that is getting fade away that you can’t even tell what is going on (I use it as my mousepad).

And baby it’s cold outside.

Because I don’t want to fucking get up.

I’ve been sleeping a lot. Like 12 hours a night. And it’s difficult to get up when Bisho is being a cutie and cuddling and also sleeping. It reminds me of when I didn’t want to get up back in college. Except over there it was way below freezing. It is fucking cold right now. It sucks. I can’t wait for this shit to end.

I spent all Saturday with the Reader’s photographer taking pictures in town and like always, having fun. Except he is a show-off with tons of gadgets and makes a hundred times more money than me. So I love and hate it. It’s a reminder of how I used to make money and now I count pennies so I can drink beer so I can forget that I am counting pennies.

He was here to work on my next cover. Good news. I have the last cover of the year. Good news again. Another query for another cover got accepted and it’s again a story I am excited to work on and that I know it will be very good.

Bad news. I suck at writing. My food reviews are shit. Some food is hard to describe yo. So I like to write from experience. But this is not a go anymore. I’m not sure what to do.

Bad news. I suck at interviewing. I wanted to interview a cricket salesmen, he shied away and I got rejected. Now I don’t know who I should interview. I will try again. But it’s fucking silly. With celebrities I seriously gave 0 fucks. With regular people I get nervous. Celebrities are used to it and know what is coming at them. Regular people get nervous and their nervousness transfers into me.

Last week was a waste. My own fault.

I do the same thing all the time. I get paid. I say I’m going to work more so I can start saving money. But instead of that, I just count how much money I have and how many days I’ll survive with it. Hint. I still have enough for the rest of the year. Not cool. I don’t really have enough to buy some X-mas presents like the capitalist world we live in tells me to do so.

So everyday. Nope. Every hour. My brain jumps from one to the other.

This freelance life is great!

I should get a job!

NAH! This freelance life is great and the more I do it the more I get paid.

But … ahh I should get a job. The routine would be nice. And if it’s a full time job in San Diego, it would be a lot of money. I could save a lot of money quick. I could get a car. I could buy more gear. Then maybe I can quit that job after a year and truly go freelance again.

Yes. That sounds good. That might be what I want to do.

I’m kinda tired of writing. Even here. I have been to open. To vulnerable.

That means I’m someone with a lot of potential but unfortunately I’m an idiot. It’s not the first time someone says that to me. She didn’t mean it in a bad way, and it’s true anyway. Well.. the pendejo part is new. More like I’m lazy. But that I’m a dude with potential I hear it all the time. I just don’t know how to sell myself. I don’t know how to make money. Many times I don’t even feel like I am me. I know that sounds weird, but I’m still just a child. Thinking that I’m a 30 year old dude is weird. To think when I was only 22 I was making 4k a month. And I was used to that. That’s how much I make in half a year now. I want to go back to that.

It’s like being a mutant with powers that doesn’t want his powers or doesn’t know how to use them. Maybe I should just go back to college again.

Oh yeah. Student loans. I got to write my deferment application today.

I also got to re-write a story that got rejected. I don’t do well with rejection. I guess it’s for the better. To keep me off mediocrity. Time to pace around the house and figure out how to re-write. Also. What is next and what happens next and what the fuck am I doing. Then I get distracted and suddenly it’s been 3 hours and I’m in the 22nd page of Reddit.

AHHH. It stings to be so divided in what I want out of the end of this year and into the next. I’m also hungry.

Cool. I didn’t know that. I didn’t even remember I saw him. But I went quickly through folders of April of 2010 and I was going to post pictures of Kristin Kreuk (the chick that played Chun Li), but then saw Sting. Sting is a much bigger celebrity. And I can’t believe I took his picture and have no memory of it. I’m not a huge fan of Sting, but shit, that man is a fucking legend.

Pictures are from April 5th, 2010. I have no idea why the shoot was so horrible. Most the pictures are horribly backlit, extremely dark, or a bit soft. And I was shooting with the goddamn D3 with the 70-200/2.8f. God I miss that body and lens.

Sting wearing purple pants and me having a terrible shoot. 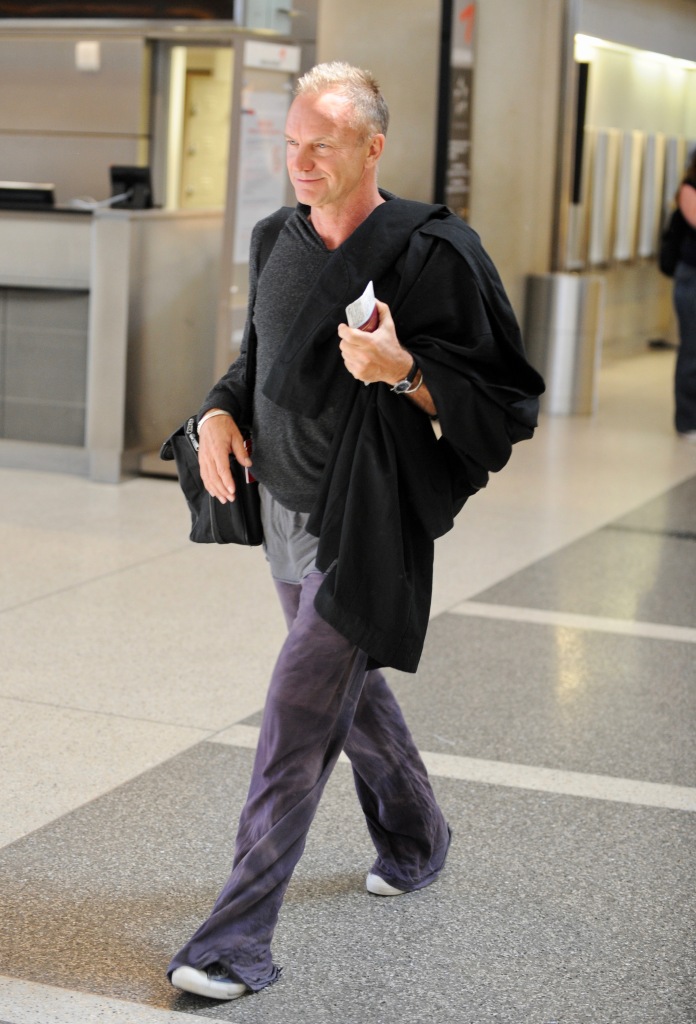