Is Wolverine gay? If you do the math… it makes sense.

There’s a lot of rumors that Jackman is gay and there’s a reason the rumors exist, the man is a perfect specimen! He started his career in the gayest form of acting possible, musicals. He is extremely good looking and well groomed. His wife is much older than him, has two adopted kids with her and she looks like an Alien (not my words). But now that I have your attention, I’m not here to talk about his gay rumors, I’m here to share my experiences with him and tell you how WONDERFUL he is and how great was to take his picture.

Yes, Hugh Jackman is nothing short from an amazing human being, so who cares if he is gay. He is the nicest celebrity out there, not only personally as a photographer, but all the stories I hear about him are that he is the nicest person ever. He hugs his drivers, he knows all of his staff by name, he tips waiters and servers extremely well, and he poses for pictures for the fans and paparazzi. Not only that, he will also shake your hand and introduce himself to you. So I was really lucky that he was the first celebrity I ever took a picture off, and I was completely by myself.

It happened the first week of July in a very early morning at the Los Angeles Airport. Ivan, my brother Kido and I went to LAX for an arriving flight of Paris Hilton at 6 a.m. and a departing flight of Ashley Simpson at 9 a.m. We got there 10 minutes before 6 a.m. for the Paris Hilton flight… we never saw her.

After never seeing Paris, we rendezvoused in the airport parking lot to figure out how we were going to do the next job, which was Ashlee Simpson. She was on a departure flight to London with boyfriend Pete Wentz. Because it was a departure, it meant that she was going to be on the top floor, departure level. I got handed the boring task of guarding the bottom floor, where arrivals occur, while my brother and Ivan covered the top floor.  We were communicating by radio a lot, in case I spotted her coming from the bottom floor and if they spotted her upstairs, I was supposedly run up in a hurry and do video. But because I was by myself downstairs, I was hoping that I would get pictures instead of video.

I’m waiting, bored out of my mind when I see a limousine pull in nearby. Next thing I know, Hugh Jackman is to my right arriving from a flight, completely unexpected and I’m by myself with a camera and a celebrity in front of me. I radio in my brother and tell him that Hugh Jackman is down here and I tell him to run down and I put the radio in my pocket. He didn’t understand me and just kept hearing him talk back on the radio. I knew I had no time to lose and I couldn’t wait for my brother to get to the scene, so I started taking pictures. As soon as I started taking pictures I noticed a woman behind Hugh and I said to both of them “Welcome to LA Hugh Jackman and Ms. Jackman” and kept taking pictures. I had no idea who the woman was which happened to be his wife, Deborra-Lee Furness. I honestly thought it was Hugh’s mother, lucky me I only called her Ms. Jackman.

As soon as I was done I saw my brother running at me with his camera on his hand. Panting heavily he asked me “What’s going on? Where’s Ashlee Simpson?” I told him that he missed everything, and that it wasn’t Simpson, that I got Hugh Jackman with his wife exclusive. He got excited for me and immediately asked me to show him the pictures. After seeing what I got he said he could have done better but that it was really great for my first time doing it by myself. I did better than he thought and I got good enough shots that it made it to JustJared and other blogs. They credited my brother and Ivan on the pictures because they were part of the team though they didn’t really take a picture. We never saw Ashlee Simpson and we went home with just the exclusive set of Hugh Jackman, and my very first set of paparazzo pictures. 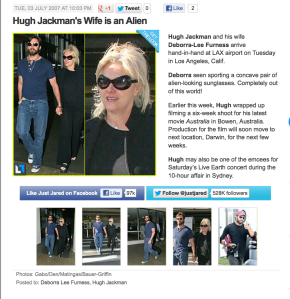 I lost the original pictures of that set, but JustJared still has them posted on his website. Notice the credit near the bottom? That was the first time I saw my name on a photo credit.

I saw Hugh Jackman way more times on my next few years as a Paparazzo, I don’t even know how many. The following are the best pictures I could find in my hard drive:

These were taken on March 27th, 2009 on an arriving flight and there were more photographers at the scene. That’s his adopted son and he was great and sympathetic to the camera and the photographers. My pictures got printed and were featured in several blogs.

These are from June 7th, 2009 on a departing flight. My brother was with me and no competition was there (exclusive). Look at how damn ripped he is!

This picture was taken close to midnight on January 5th, 2010. A lot of competition was there and he was being friendly with all the photographers.

These were taken on February 7th, 2010 arriving at around noon. He is about to get in his limousine, but first he bro-hugs his driver (you can see my competition on the back). 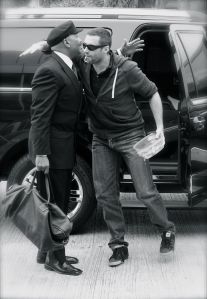 and on February 24th he was taking a departure flight and before leaving he also bro-hugs his driver!

This one was taken on April 29th, 2010. Again, a lot of photographers were there and he was nice as always.