My girlfriend has the day off this Monday. It’s apparently a holiday in Mexico. The birth of Benito Juárez and the first day of spring.

The first day of spring is not today. It’s tomorrow.

Mexicans just like to pepper holidays whenever they feel like it. So she doesn’t have to work this Monday, and a lot of other shit is going to be closed. Like banks, schools, some restaurants, etc.

And I guess I can skip yet another day of work.

Kinda did some of that unpaid work this weekend. And by work, I mean I went to Plaza Fiesta to drink beers and get pictures with Andy for the cover story.

He gets paid. I get beers.

That was on Saturday.

Saturday was fun. Hanging out with Andy is always fun. Sporadic fun. Not giving a fuck let’s do anything fun. Except karaoke. Andy hates karaoke more than I do.

We met up with friends that are featured on the Border Crossers story that comes out this Wednesday.

So after a few beers and tons of pictures, Andy and Dirk (oh yeah, Dirk came along as well) crossed back to San Diego.

And I and three girls (one of them my girlfriend) went to sing karaoke. More like they went to sing. I just kept drinking. Trying to drink fast to get the courage to sing some karaoke. But never did.

Oh yeah. The cover story comes out this Wednesday.

I’m nervous about it. It’s been a while. I hate the little pressure that builds in my brain.

That pressure is not letting me work in other stuff. I just want that to be over. So I can start on the next thing.

And I’m still completely unsure of the next thing.

At least I got paid and I still have money that I don’t really have to worry about it. But I hate the feeling of not generating money. Of being stand still. Of not knowing what’s next.

At least I have Zelda. That game is sooooo damn good. It makes me not care about much except playing the game. Of course, girlfriend is not entirely thrilled about it. But she’s so nice. She lets me play. I just wished she understood what that game means to me instead of looking at me like a 10-year-old playing with toys.

At least I am a 10-year-old playing with toys…

Only one thing is for sure this week. I have a tour on Saturday. It’s a big group bachelor party. And I am pretty sure they are Asians. I mean, the guy that contacted me has a Chinese name. So it might be a big group of Chinese Americans…?

I never know. You never know with my tours. The only good thing is that they requested no strip clubs/brothels. And it’s bachelor party! So I should reserve a nice restaurant, a brewery, then go hit the bars, some street tacos, make it a fun night. It’s going to start early as well. Hope there’s no border traffic. That will ruin the fucking tour.

Gallos also won on Saturday. 3-0 against Pachuca. That was also a good Saturday thing.

And Sundays with my girlfriend means laundry and cleaning the house time.

But like I said. She’s amazing. She does most of that while I play Zelda. Then we go to the laundry room and fold our clothes together. Only three people in my life have touched my laundry besides myself: My mom, that stranger in the laundromat where I paid extra to have my shit cleaned, and my girlfriend.

At least I took her to Zona Norte sobre ruedas to buy some stuff. She got new shoes. She was happy about that. She also bought shit tons of candles. My apartment is slowly turning from a dirty bachelor pad to a decent apartment of a happy couple? I don’t know. Most the shit is still mine. But she wants to change so many things for the better. Things that I don’t care or notice. But she does. So they will change.

Next up on the list of things to buy is an electric shower heater. And… many many more things. She ended up buying a shower curtain online (the one I liked!) and now we need more curtains for the room.

What have I become?!

We did other shit on Sunday besides be a Sunday couple.

And met up with Ken Terry. The guy who gave me the first line for my cover story. I met him on Reddit. He is a fun guy. Pretty new to town. Somewhat shy. I took his picture, bought some beers, and dinner for everyone. Fish tacos and tostadas de atún at Teléfonica. We dropped of Ken to be with his girlfriend, and then babe and I came home. I played more Zelda while drinking beer. And she looked at more stuff to buy online while drinking a Mexican white Russian (replace vodka with tequila).

And water is back in Tijuana since yesterday morning. Fuck not having any water.

The weather is good enough for me to enjoy cold showers. It’s weird, and I never thought I would enjoy them, but I like the cold showers. I’m pretty sure as soon as we get hot water I’m never going to cold shower again. It’s just short seconds of cold pain. But then you feel so fresh. And your cold resistance goes up +4!

Why… because I looked up what I was shooting the first day of spring and Benito Juárez Birthday in 2010. And Joan Rivers was one of them. I also shot Camila Alves, Cindy Crawford, Claire Danes, Daisy Fuentes, Kristen Stewart, and Marisa Tomei that day!

I didn’t plug in my hard drive because lazy. But I found three folders of her. The first one is from March 21st, 2010. The first day of spring of that year and birthday of Benito Juárez. And a reason to have a day off on Mondays in Mexico. Did I already say that?!

It was also some random day at LAX when I shot Joan Rivers. Another dead celebrity. Weird to think of how many pictures of dead celebrities I have on my hard drive. And how many more are yet to die that I have posted here….

Needless to say. Joan Rivers was fucking awesome. If there were video cameras around, she’ll tell jokes and be raunchy. If there were just photo cameras, she’ll tell jokes and be raunchy. And always happy. I mean, maybe she was always smiling because of the plastic surgery. But she was fucking nice. It was always a joy to see her.

This first set is from March 21st, 2010. The first day of spring of that year and birthday of Benito Juárez. And a reason to have a day off on Mondays in Mexico.

It was a bad set of pictures. 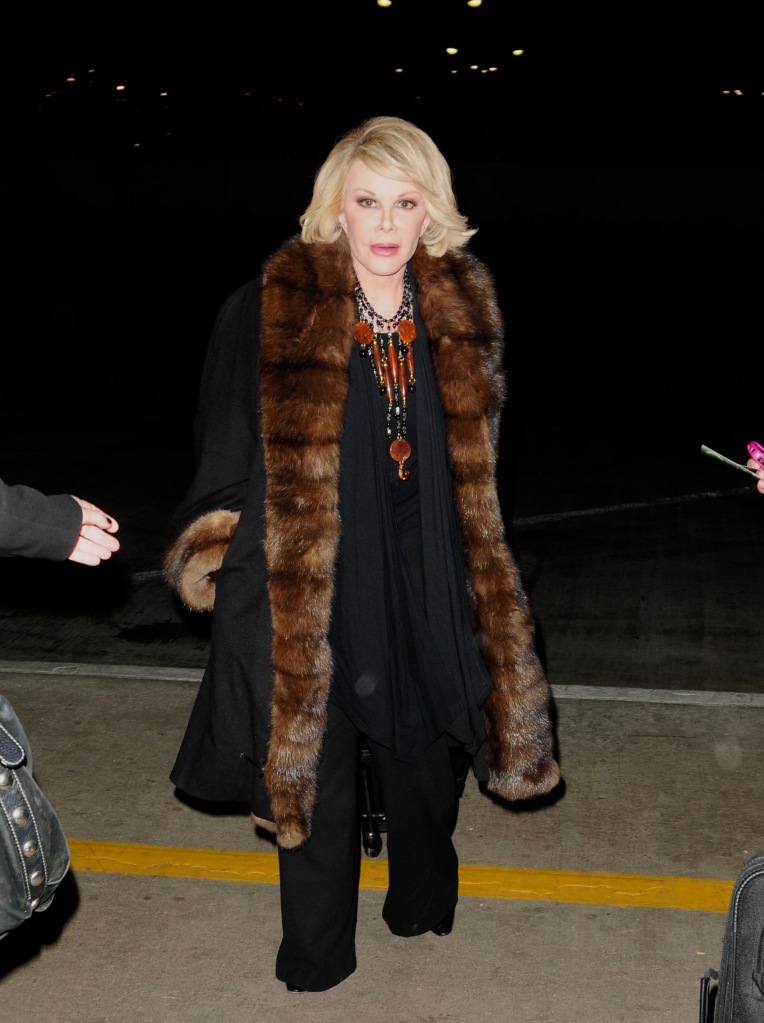 Underexposed and meh. It was taken late at night after a whole day of shooting Camila Alves, Cindy Crawford, Claire Danes, Daisy Fuentes, Kristen Stewart, and Marisa Tomei. And Joan wasn’t much of a sale. I’m pretty sure I shot that real quick just to appease the boss and went back home to rest. The folder is just a couple of shitty pics, and then I was done. 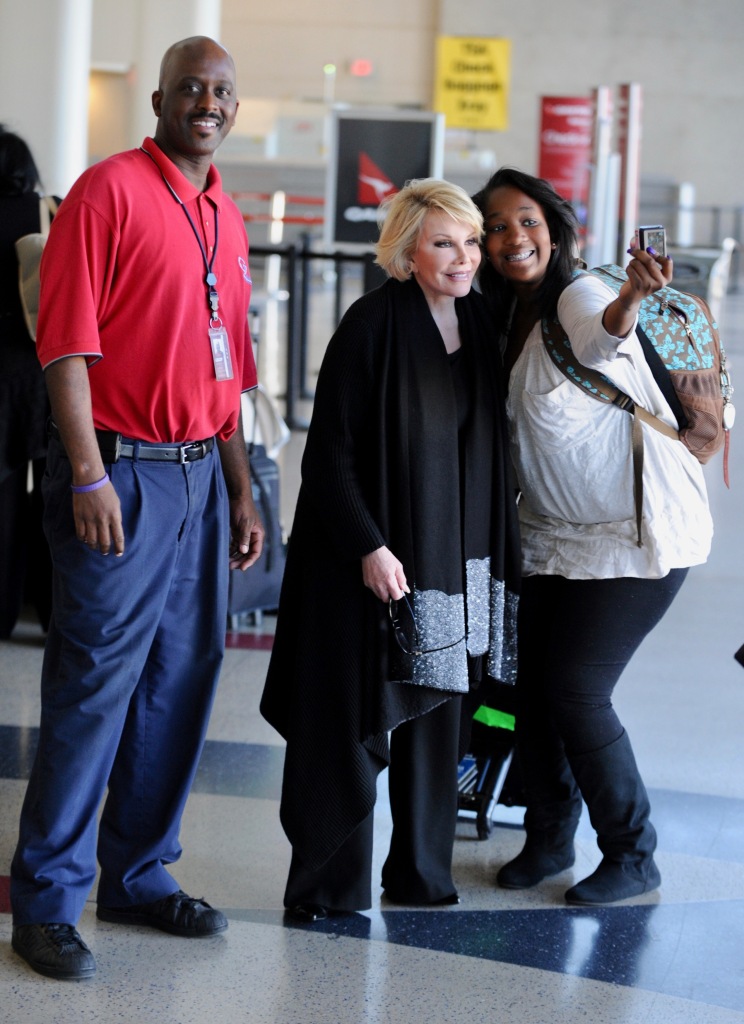 That black dude always told me what celebrities he spotted. And then he always smiled in the background of pictures. He loved seeing himself in the magazines.

Long lens so much better and easier.

Again… folder didn’t have that many pictures. Joan Rivers wasn’t much of a sale. Just shoot it to appease the boss.

Last set is from January 31, 2011. The day I shot Cyndi Lauper looking like crap. The day I broke my LAX record shooting tons and tons of celebrities. I’ve posted about it before here and here.

One outside with long lens. 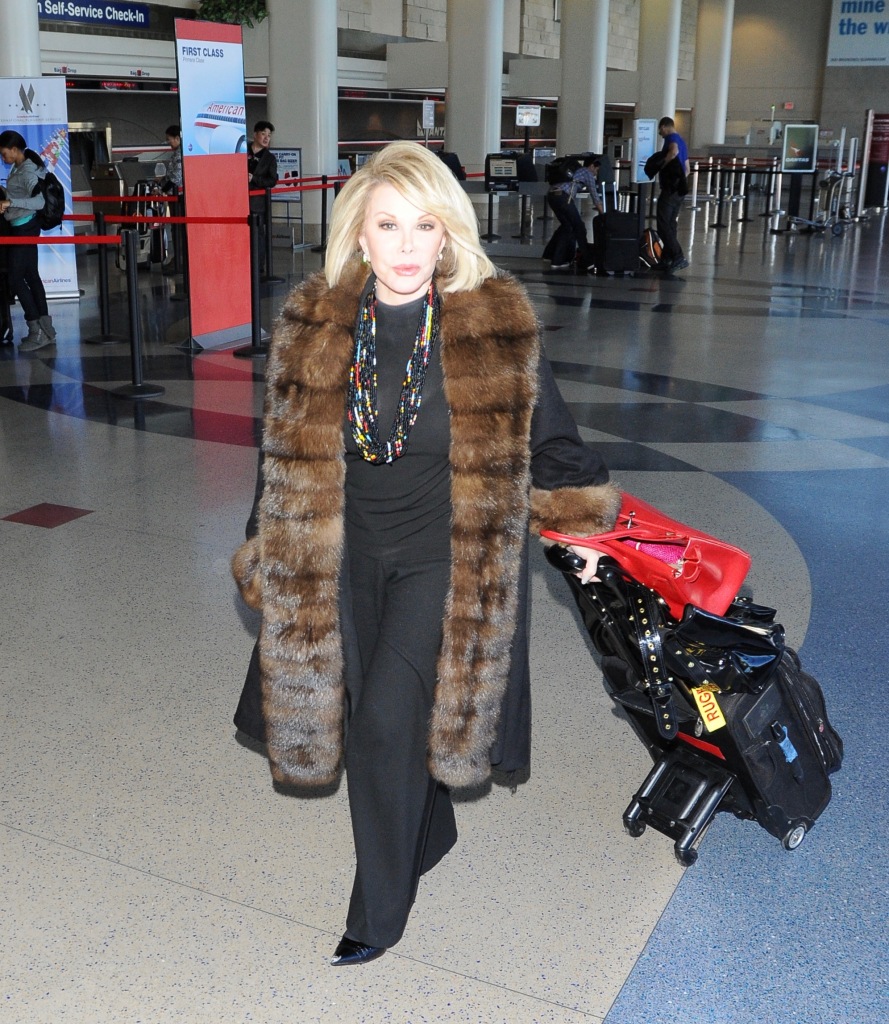 And another overexposed with the flash. Again, folder only has a few pictures. Joan Rivers wasn’t much of a sale. I’m sure if I plug in my hard drive I’ll find more pictures I took of her. There are some that I remember that were much different. I actually don’t remember any of the shots above…

Throwback celebrity Monday accompanied with a side of word vomit accomplished!

Now to shower and go have breakfast with my girlfriend at a place that she has wanted to check out. I am pretty sure it’s going to be okay to mediocre. But breakfast!