Last week was pretty much out of control. Fortunately I made some money through Tijuana Adventure (and also had a blast). I am planning a lot of changes for Tijuana Adventure and it involves more and more writing. That website receives much more traffic than my blog and I haven’t posted anything in a long time. If I do blog posts on the regular I believe it will generate a lot of traffic. Tours will be pushed to the side. I still intend to do tours, but it won’t be my main focus. In fact, it hasn’t been my focus in a long time.

I was late last week because I ended up partying with my roommate in San Diego till really late. It wasn’t work for me, but it was work for him since it turned out to be one hell of a time and he is lucky enough to get paid to actually party. So to a certain I was his gonzo aid.

Wednesdays are the days I usually wait for, I thought I was getting published… But nothing. I got an email that morning that got me excited, it was a job offer from Blasting News US, though it wasn’t much of a job. It’s a crowdsourcing news website that gain success in Italy and it’s expanding to the rest of the world. I wrote for similar sites before for petty cash, this looks like more of the same unless I get over 5,000 views per article, it is not worth my time. I sent them this article which I had sitting on my desk.

CLICK HERE and/or HERE (It’s the same link, I just need thousands of more clicks to make money, so share it around as well)!

I am around 300 views… 9,700 more to go if I want to make some cash. I will work on more clickbaity stuff for them, since they depend on clicks, but of course I am not that shit of a writer, so I will try to make them engaging. I have been looking for other sources to publish my work that is broader than the SD/TJ region.

But instead of working on sending them more stuff, I worked on a story about taxis and the mafia like system that they have. Voodoo Stu got the cover story that day, an awesome and very well written of the Tijuana soul. So after interviewing several taxistas, I had dinner with my roommate to celebrate his story. Again early drinking and waking up at dawn the next day.

Thursday I finished the taxi story and sent it in…. I still haven’t heard back. WHEN I WROTE THIS, I still haven’t heard back, but it got published a few hours after. HERE IT IS. TAXISTAS IN TURMOIL. But it doesn’t matter because that same day had an awesome Tijuana Adventure. Fancy bachelor tours are becoming my thing, but it is so much work and very draining. We started the night around 8 pm at a fancy dinner in Mision 19 (fanciest restaurant in Tijuana). Then went to my favorite brewery, followed by some mezcal shots and then to the real bachelor party (we ended at 5 am).

It was me and six gringos, they all knew each other from college or friends since before and haven’t seen each other in ages. Like always, I was just another of the guys, except touring them in Tijuana and make some little cash on the side. Again I woke up very early on Friday, I met up with the tourists and made sure they had everything they needed and all the info for their next two days in Baja without a guide. Gallos Blancos played that day against Toluca and I bet 200 pesos for them to win, they didn’t. The rest of my night was spent resting and watching House of Cards (yes, for the second time the whole series).

With no real work on my plate for Saturday, I went to play Smash Bros in Plaza Friki with a friend. I kicked his ass (he started beating me, then I dominated). Then I went to search for new places to write a food review. I found a new one that looks promising/interesting. Also met with a friend who wants me to do some camera work for a bar he started working at.

Sunday was just a day of rest. More House of Cards and Sunday tv. I did not leave the couch all day and ordered two pizzas. Now Monday, I am on my way to a restaurant in San Diego to write a food review. I needed to get out of my apartment so the trolley is my office today. I haven’t been following celebrity news (I rarely do), but the cute girl who likes my old pictures and my writing told me Angelina Jolie is in the news lately, so here it goes.

Turns out I have already posted about Angelina Jolie. In that same post I also talked about Nicole Richie, David Beckham and Patrick Dempsey. Click here for one of my earliest posts from 2012. Holy shit, I HAD THIS BLOG for a while now….

The first time I saw Angie was very very early on my paparazzi days in 2007. I didn’t really even knew how to shoot, I am sure I shot on P settings with a 20D and 70-200mm/4.0f (instead of the 2.8). I was supposed to do video, not shoot. They sent the whole agency (like 15 photographers) just to shoot Angelina, it was very dumb. From all the photos, they used a couple of mine that I shot from a distance. But since it was early in my career, I didn’t even have a computer, so I do not have the originals. Here are the ones that Just Jared used way back in the day. The second time I saw her was dumb. I was sent to her house (on N Bronson Ave with Canyon Dr). We sat outside Angie’s/Brad’s house for a week, but they made all follows impossible. The one time we were able to follow, she ended up going to a red carpet event on Hollywood for the Kung Fu Panda movie, so it was a waste of a follow and of a day since tons of photographers were already waiting (including one from our same agency). I only got pictures from really far away, but did get a few good ones of Angie. I have been digging through my hard drive and can’t find the pictures of that day.

The third time I barely even have memory of it. They snuck her out through side doors on Terminal 4 at LAX and I only saw her from a distance. Pictures are from February 2nd, 2010. 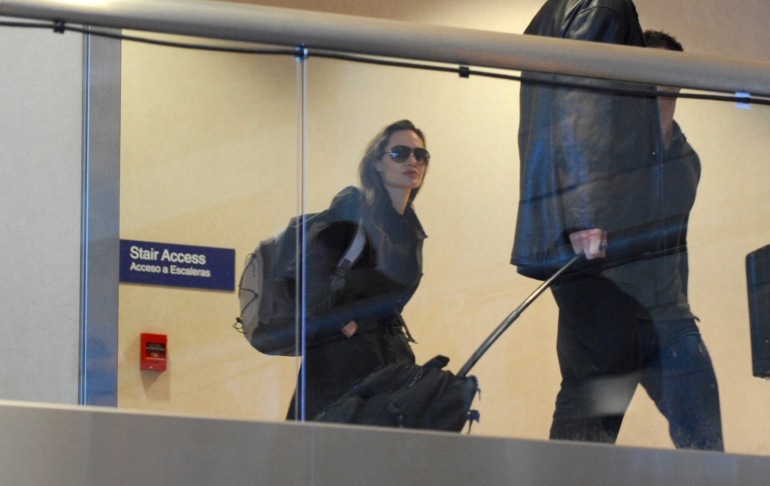 I only saw her once, and it didn’t even look like her. It was one of my latest most popular pictures that got paid well enough. A small frame was actually in the cover of several magazines and that’s because well… Lauper didn’t really look like herself. I believe that’s the same day I broke my record of most celebrity shots at LAX (more than 28). I wasn’t even interested in Lauper, but a friend of mine told me that she looked horrible and that I must take pictures of her. Jon Hamm and Katrina Bowden were going through LAX at the same time, so I only managed to take a few pics of Cyndi. Those fe pics were worth more than all that I shot that day. Pics are from January 31st, 2011, a few months before I quit the paparazzi gig.

Those two pics resulted in a media frenzy… 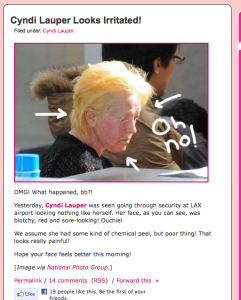 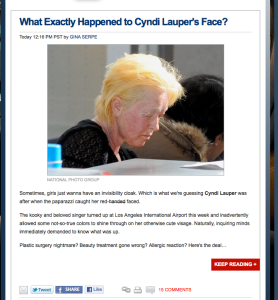