It was a good week.

I made it to the front page of Reddit on Thursday because I posted a picture of tacos. Reddit karma went from 6,000+ to almost 13,000. I received more than 250 messages and the thread has over 1,500 comments. I am not sure how I feel about my Reddit success. It was a thrill at first, then it’s over and you are left with a need to make it to the front page again, especially with OC. Which I am planning on doing, with more pictures of tacos.


The overwhelming majority of comments on the thread are people saying “so?! This taco looks exactly like the one I have in California/Texas/NYC/etc.” No it’s not. You fuckers have no idea how much different Tijuana tacos are compared to the rest of the world. But oh well. Fighting with strangers on the internet gets me nowhere. It was a good week.

I like how every Monday I post that I’m going to stop the party and get to work, and I don’t. I mean I do work a lot, but can’t stop the party. Tijuana just absorbs you. At least I am being responsible and getting my work done in time.

Since Tuesday work plans went to shit, it was time to really do it on Wednesday. My roommate had the same mission of getting pictures of tacos. So we started bright and early with some tacos varios in Tupidos. Though I had no intention of drinking, my roommate never stops (and I stupidly follow). We went to Bar Aragón though it was just 1 pm. First beer of the day. We then went to eat more tacos at la Cahua del Yeyo. These tacos were weird and I could barely finish one (it was tuna fin, tasted gross).

Wednesday did not end there. It was April, 20th, so of course 420 celebration ensued. Some pretty girl that I recently met helped us in partaking in the festivities. Hungry for more tacos, we finally went to Taquería Franc, which was my mission. I took some pictures, did a bunch of research work and we ate like pigs. That’s the picture that made it to the front page. We then went back to drinking more beers and celebrating more 420 fun stuff. Here’s the album of that night:

By Thursday I was done with drinking and eating tacos, but a friend asked me out for coffee, so I went with her. I had to go eat more tacos for work, so I bought tacos for both of us and took more pictures. After that, she wanted a beer, and though I was exhausted, I complied. It was while eating tacos that my roommate and my cousin both texted me to let me know I was on the front page. Holy shit. I came back to so many messages and I read through most of them. That was my Thursday. Redditing all day.

Friday was finally rest. I interviewed Dr. Leaño, a sexologist in Tijuana for a story I’ll be working all week. Really nice guy who knows a lot about what is going on with all sex related things in Tijuana. The doctor will connect me with other sexologists so I can have a full article and I’ll have to go do more field work. I intended to do all of this last week, but I forgot I had the taco issue to take care of. I slept in on Friday. Didn’t even think about going out.

Saturday my Gallos Blancos (soccer team) played against the best team on the league right now. The odds were against me, but they paid really well, so I ended up putting $12.50 (to win $55.50). By halftime, the game was 2-0 against Gallos. The bar I was in started to get flooded, everything seemed to be going to hell.

I left the bar looking for a different place to watch the game. Right next to the bar there’s a shithole stripjoint. The guys on the outside told me to come in to see some titties. I said no thanks I just want to watch the game. Dude right away told me, I’ll put it on the TV for you. I asked for beer prices, pretty reasonable, so fuck it. I went in to “El Zorro” strip club and stared at the TV while not so hot girls offered me lap dances (no thanks, watching tv honey).

Gallos score. 2-1. Gallos scored again 2-2. OH SHIT! I started to get excited. I might win. Red card for the other team, OH MAN, it’s happening. I yelled each goal with a passion on the emptyish strip club that only had half naked ladies. If Gallos won, I was going to go all out and party a lot. Nope. Denied. They lost 3-2 and I went home disappointed.

I laid on the couch for a brief moment, and before I knew it, I was asleep at 7 pm. I woke up at 8:30pm to find out I was late to see the pretty girl I met on Wednesday. I ran out of my apartment to go meet her. Beers ensued. And more beers ensued. But she left with a friend of mine to party harder, I went back home a bit after midnight. Ate tacos. Slept.

I still had more tacos to eat to finish my article. So Sunday morning I went over to Tacos Aaron to eat yet more tacos!!! They were delicious, but I am so sick of tacos all day and all night. For lunch, I went to Mariscos Tito’s to take pictures of their ridiculously gigantic fish tacos. They aren’t very good, so I just picked them apart and ate a little. I walked by the beach, took pictures, and went to visit my parents for a while. THEN I had more tacos for dinner so I could take yet more pictures of TACOS!

Here is a full album of taco pictures that I just posted on Reddit to see if I make it big again:

It was a good week.

And now. I have all this week to work on more stuff. My cover that I’ve been waiting since December finally comes out this week. And after that I plan to change all of Tijuana Adventure into something different. So yeah, more unpaid work that might lead to paid work but I have to concentrate as well on the work that actually pays me!! GOT IT?!

SO MUCH FUCKING WORK. Better get to it. So let me tell you about the time Stevie Wonder took my picture.

First and foremost, I am a fan of Mr. Wonder. Not an all out fan that loves all his work, but we had to play some of his songs for jazz combos while I was in college and those bass lines, so sick. So much fun to play. So fucking grooving. I saw him twice. Both the same week. One departing, the other arriving. When he was arriving they told him we were taking his picture, so he decided to fool around and take a picture of the paparazzi. It was hilarious.

This is him departing… and entering the bathroom… and then leaving! Pictures are from May 19, 2009. I had just turned 23-years-old… weird. 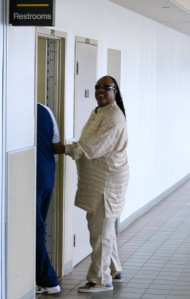 He greeted a random fan (Stevie is a super nice guy) and then he was on his way to France (I believe). 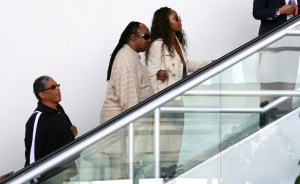 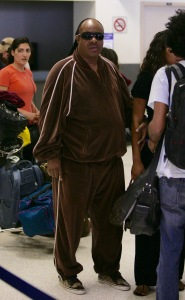 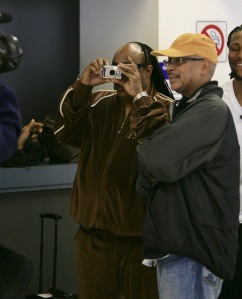