A serious WTF?!?!?! Culkin was in motherfucking TJ!

This guy is an elusive creature. Almost all child stars are, except Elijah Wood, that guy is the nicest guy ever. There’s probably more, but I can’t think of any child Hollywood star that is sane beside Elijah. Can’t wait until Suri Cruise grows up into a fucked up world where she was famous since she was born for nothing. Macaulay obviously hates the paparazzi. He hates any media attention, he’s been getting it since this:

Not only that. Add to it that he also went through a drug phase that was also very highlighted in the media. And he also dated Mila Kunis who usually shies away from the paparazzi.

Incredible that I probably went right by Culkin and didn’t see him. I was working that night giving a night tour of Tijuana to two French-Canadiens. I’m glad I didn’t see him though, I do not miss my days in Los Angeles taking pictures of people that don’t want their picture taken. If I spotted him, my first reaction would have been to pull out my cellphone, take a video and start asking questions. Not that many people realize it, but a celebrity in Tijuana can possibly be a gold mine…

Macaulay and I were in the same place, at Moustache Bar. Har Mar Superstar had a show at the place and part of my night tour was to see his show. Unfortunately, the opening DJ wasn’t that great, so the Canadians and friends we met up with wanted to go to a different bar. I missed Har Mar’s show and also missed Macaulay, who cooly sat down on the steps that lead to nothing to watch the performance.

Excuse the shitty watermark, but had to protect the pic in a hurry.

I actually saw Culkin in my paparazzo days, only once. He was in my LAX list a multiple of times, but the elusive fuck always managed to avoid us. I hid pretty well to get the pictures that I got from him, because once he sees a photographer he won’t show his face once more. Because of where I was hidden, the angle is crap, because it was 6 a.m. and with no light, the pictures are a bit dark. The pictures never sold. He spotted me while he was going up the escalator and never turned around again… 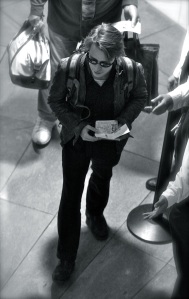