I should blog and do some work… but let me smoke and play some Starcraft.

I don’t do anything.

I wake up late because most of us wake up late in these weird times. It’s May. Mother’s Day was yesterday and I cried a bunch. By myself. Because we are all alone. Speaking of being alone, check this song by Su Lee.

She exploded overnight through Reddit. And with good reason. The song is so fucking catchy.

Speaking of YouTube… I’ve been uploading more beer reviews. And I also did a photoshoot with my tuxedo on.

Because my blog is running out of space, I’m going to post a reduced quality picture. 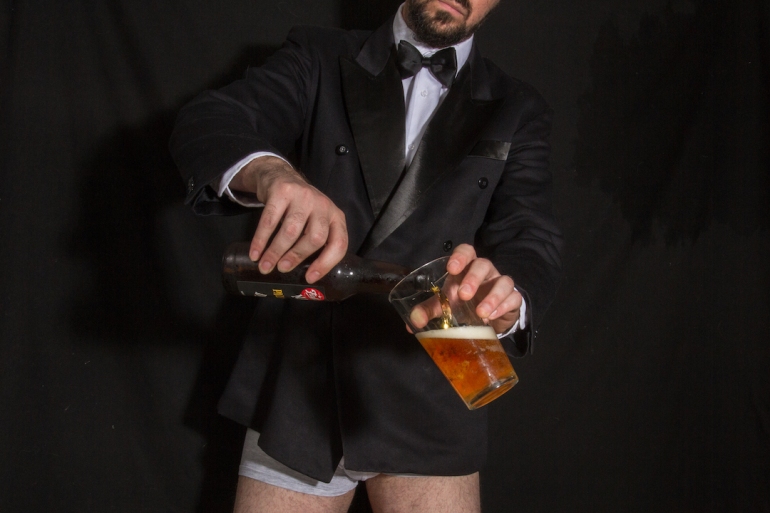 Oh. I have new lights. Thanks to Andy. The Andy I mention on my photographer profile.

The lights are fucking KILLER!

But I have no one to take pictures of. I’m still learning how to use them but fuck are they great.

I’ve uploaded four more videos of me drinking beer. The tuxedo is gone because it is too hot to be wearing it for more than a few minutes. Even without pants.

I uhh… don’t even remember what I film. So yeah. Just check it out. Hit subscribe and like and all that shit.

Here’s the DIPA by Insurgente with Morenos Brewery. Find out what I think about it by watching that long-ass video… or… I’ll tell you real quick. Insurgente has better beers. It’s not bad at all.. but there’s better ones for the price.

Drank some Mamut light beers and some Buqui Bichi from Hermosillo. It is probably the best beer from Hermosillo, but in Baja, we are plenty spoiled. Mamut takes the edge.

And finally, I did this one yesterday.

You know how many subscribers you need to make money? Way more than what I have. And over 8,000 hours of viewed time. So go subscribe. And watch and re-watch the videos. Play them in the background and ignore them or something.

So that’s what I’ve been up to.

This morning I woke up late like always and got a message from the office that they need some pictures for an upcoming cover. It sounds like a fun and interesting gig with some creative talent behind it. I should be able to kill it like I usually do.

I have one gig.

My editor also told me to write. I told him I was going to. Guess what I did?

Yep. I played Starcraft and did nothing. All I want to do is play with the lights and take more pictures.

It’s my birthday in 5 days.

I don’t like my birthday. I’m going to be 34 and I have only accomplished weird shit in my life.

My book is going to be free on Kindle that day by the way. So if you are reading this, free copies then.

Sorry for those who already paid for one. This is what you call marketing through Amazon?!

Not one single copy has sold in the past week. The high of the book left forever ago, but at least I was getting some sales. Some crumbs. Now there is not even that. Every once in a while someone will read it on Kindle Unlimited and it makes me happy that from millions of books, they chose to read a bit of mine. I make almost no money from it. Just the pleasure of knowing someone out there is reading my shit.

I am also getting ready to write my next book. I’ve been saying that since the beginning of the year and so far I only have a draft of the intro, some random chapter I wrote almost 10 years ago, and the general idea behind it. I think of what I’m going to write all the time, then I don’t. I just don’t.

I should just write it on my phone.

But I still don’t do that.

What I’m getting at is that I’m a total lazy piece of shit.

Sorry, uncle Walter, I promised you that I wouldn’t be. But I am. It’s almost 3:00 pm and I haven’t had breakfast…

I think I’m going to get tacos for breakfast. I have the ingredients to make a home breakfast but I’ve been doing that a lot. So tacos sounds like a great idea right now.

I got tacos, did a photoshoot of the tacos, then I forgot I was writing this. I almost started playing Starcraft again. And I want to nap now.

I used to force myself to write 1,000 words on the daily. I am not sure how I accomplished that. That is the idea of the next book. But I wake up and I don’t want to be a writer. I just want to play with the lights and be a photographer…

Manifest yourself! I need you so I can do more shit than just mope around the house and not even clean the fucker…

I have a roommate soon. Probably in a couple of weeks. This shit needs to look nicer. And the studio needs to fit in my own room or the living room and there is too much crap everywhere.

I can do this. I can throw a lot of shit away.

I also have some beer and a bottle of tequila I bought for my mom. So I have plenty to drink and eat for this week while I figure out life.

When will tours happen again?!

I’m not sure… but maybe doing the beer videos gives me more legitimacy as a beer tour guide in the city… it should.

Hopefully, people pay for it. I should be okay. Unless the world isn’t. And no one wants to tour. Or do photoshoots. Or publish my writing and give me money. I’m not sure what else I can do for money.

The studio lights are killer. I need to work more on that… I have some time… some time…

I should write that as well.