Even my therapist says it sounded like I’ve been better.

Therapy is good. Even though it’s only once every two weeks for just a short period of time and it still feels like I’m just paying someone to hear my awesome stories (hah, yeah right).

It helps though. That’s what matters.

I cleaned the fuck out of my apartment.

At least the living room. Feels so much nicer. I still have to clean my room.

My mom’s table looks cleaner. Two of her favorite turtle paintings sit next to her. I want to hang them, but the walls are too thick to drill and I wouldn’t trust glued-on hangers with those paintings.

In the next house or apartment, for sure.

The tattoo is fully healed. Still feels funny to have it, because you know, new tattoo. And now I want more.

I’ve been busy. Which is good. Because the next paycheck will be better than the last three. And I need it.

I’ve been shooting a lot.

Today is like my Sunday. That’s why I have a chance to sit down and blog for a bit.

I still have a lot of pictures to post.

Despite being busy, sometimes it hits me and I cry randomly. Just a second ago it happened while doing laundry. Yesterday while driving. I miss her a lot.

Tomorrow, I go to Valle de Guadalupe for some work.

Monday, I will be busy organizing my week which is already busy.

Tuesday, I have a couple of photoshoots.

Wednesday, I have a couple of photoshoots and I’m a delivery boy.

Thursday, hopefully just some emailing and nothing else since I want to drive to LA and enjoy a weekend over there.

LA for friends (more specifically, one of my best friends I haven’t seen in years). And to bring back studio gear my brother left behind.

I applied for a freelance gig on Airbnb.

I signed an NDA so I can’t really talk about it much. But the test was tough and I failed the first question. I do not have a full-frame body (camera).

I think I did an alright job. It was that which actually inspired me to clean my house. It was a messy hell. I still have to clean a lot of it.

I also applied for Getty.

Getty Stock. Which seems basic and any good photographer can get.

Getty News. Which is awesome and they told me I’ll hear back 7-10 days from the application, which was just 4 days ago.

I already got accepted into Getty Stock. Now there are a bunch of hours to work on archiving everything that I shot neatly into their platform and hopefully, someone will view my shots and buy them and I get some pennies! (yeah… it doesn’t pay much).

If not, I’ll still continue to shoot.

I pack up all my gear on a nice Pelican 1500 Case just to flex. There is absolutely no need to carry that gigantic heavy case with the gear that I have. But it looks impressive. And that way, I can impress future clients and they take you a bit more seriously (sometimes).

Which reminds me… I went to Caesar’s Restaurant for a photo shoot. I sent them several messages prior but no response. So I thought I should just go and talk to the manager and he would understand what I was there for.

He was so confused. And not helpful at all.

They have an old Reader review framed by the bar. I told him, that’s the magazine I work for. I had a simple request, bring me all the food together instead of separately (FOR PHOTOGRAPHS). He was not understanding at all. Told him I don’t mind paying for it.

Then he made me wait for more than 10 minutes while he did who knows what the fuck.

So I just fucking left.

That’s why I am going to Valle now. Because Deckman’s also got mentioned. They have also not replied to my inquiries, but I made a reservation and hopefully, they understand what I am trying to do.

Compared that to San Diego.

I email them or give them a short call and they tell me the best hour to arrive, they are super helpful, I usually meet the manager and the chef, I tell them what my goals on the food photography are, they understand, they set it all up for me, I take 200+ pictures, then I eat everything they gave me (or take it to go), I thank them and tell them they will get all the extra pictures free of charge, and then I’m on my merry way.

That’s how it should be.

And that job makes me happy.

I’ve been getting more into food photography.

And I’m willing to trade my work for food/beer credit.

I’ll give you a photoshoot of your choice in exchange of $100 credit in your restaurant/bar.

And once I get several, I’ll start charging real money (and perhaps more than that).

I mean… I’m going to spend that money on food and drink.

So wish me luck.

I think it will work.

It already kinda worked with my therapist. I told her I’ll exchange three sessions of therapy for photography of her office/reception space, her, and with the Spa massage that shares her space.

And a dentist who is a friend of a girl I did a photoshoot for fun with over a year ago hit me up for a photoshoot. The girl mentioned recommended me. And this one is not for trade since I already have a lot of dentist friends that I go to for work.

A lot of work though. And I like it. The busier the better. That’s why I don’t mind being cheap. I just want to be constantly busy. Busy is good.

Since Caesar’s rejected me and I still had all my gear and appetite for fancy food. I went to Central.

Got me pasta alla carbonara con guanciale e pecorino, a poached egg on top, and covered with parmesan cheese: 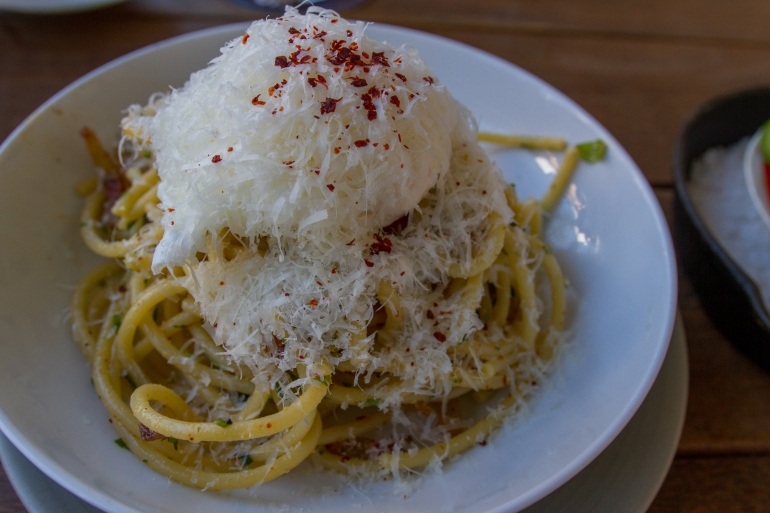 Also got an almeja reina (clam). It was delicious.

Beer by Ham (a hazy IPA that had a sour tang to it, but Ham told me that’s not supposed to be there).

The spaghetti was undercooked (too much al dente) and the egg was overcooked. The guanciale was on point and it was the right amount of parmesan and pecorino. It just wasn’t perfection (as the picture makes it look).

I would post more pictures, but this blog is running out of space. More pictures will be posted on Tijuana Adventure’s Instagram.

Here’s a screencap instead, that takes fewer bytes. Here’s a screencap of that as well:

Not enough space on my blog to even upload a screencap.

Some of the best pictures are already posted on the San Diego Reader’s Instagram.

Some of the best pictures will be posted on my Instagram shortly.

Running out of blog space. That’s why I was supposed to stop. But instead I’m deleting old files… or perhaps I should just buy more blog space and kill Tijuana Adventure since I don’t really update that shit anymore…

More work. Busy work. That one is not as fun…