11 weeks, 2 days have gone by. It still feels like if I went out to college or just not living near my mom like I did for a long time. Then after 3 or 4 months of not seeing her. I would get home. That comfort of home. That’s gone forever.

And that’s why life feels different.

Many times I think to myself “I shouldn’t do it, my mom wouldn’t like it.” And then… life is different. I don’t feel restrained.

I still live for her in a way.

More connected to my white/Jewish American side than to my Mexicaness.

Of course, my Mexicaness will always be there. I did only eat tacos yesterday.

Yesterday was a good day.

My friend invited me to a show for the 22nd time. This time I actually went.

A band from Florida called Pleasures played a fucktastic show. I did a video. It’s from an iPhone X so it’s not great, but hey, not bad for being a phone video. Here it is:

From the setup, I knew I was going to enjoy it. When the drumset is in the middle and pushed forward and not in the back of the stage, I know it’s going to be drum focused and great.

And shit yeah. The drummer was fantastic. Hitting the fuck out of the cymbals ala Zach Hill.

It wasn’t that mathy though. It wasn’t that crazy. It had a tinge of 90s alt-rock. For some reason, it had little tinges of Smashing Pumpkins or Placebo or just straight up 90s, but brought to 2020.

I just got a call from the “Social Security Administration” telling me that my SSN has been compromised.

Who falls for these scams?!

Oh yeah. The office gave me a phone. iPhone 7 that I will barely use but it helps a lot to talk to clients and do work in San Diego.

They also gave me a MacBook Air. Again… not going to use it very much except when I’m not in my office.

And that feels great. I can work remotely…

I do want a better Macbook though. I have a gig in the middle of May in which I need a MacBook Pro.

And expand the memory of my old ass iMac that still goes strong.

Oh yeah. And I gotta solicit my press pass. That expired.

Afterlife, it’s all so different.

It’s all still the same.

Back to the show. I regret not bringing my camera.

It’s amazing how much lights can add to a show. Bands should invest in lights. They had this LED light sticks that went to the beat of the music. And a strobe behind the band that went off in heavy parts. Making it feel like stop motion with the music.

And again, the band was pretty fantastic.

Because there is another band called “The Pleasures.”

A very complete show. Too bad it was Sunday and there were not that many people there.

Too bad their shirts were printed with plastic ink instead of waterbased because I wanted to buy a shirt.

They also had candles. But meh candles.

I bought some band members beers and helped them with directions to get out of TJ.

Well… it started ok. It started with work.

I didn’t sleep because I had to be at Waypoint Public at 10 a.m. for a brunch photoshoot. Yay. Lucky me. My job is awesome.

But I still got stressed out because of la pinche línea. So I didn’t sleep. My alarm was set to 6:30 a.m. but I woke up at 3 a.m. and couldn’t go back to bed until my alarm rang and I hit snooze.

Though to myself “fuck it, the snooze button is great, I didn’t sleep, I’m not even an employee so they can’t fire me, I don’t have to do this photoshoot.”

But I got up. Checked the line. It looked busy. Showered. And left.

The borderline took me less than an hour. So I actually made it early to the photoshoot!

And they served me a great brunch!

Well… I only ate 3 out of the 5 things I photographed. And the drinks were mocked drinks so I didn’t drink them. I did drink shit tons of coffee.

And the things I ate were delicious.

Here’s a screencap of the shoot: 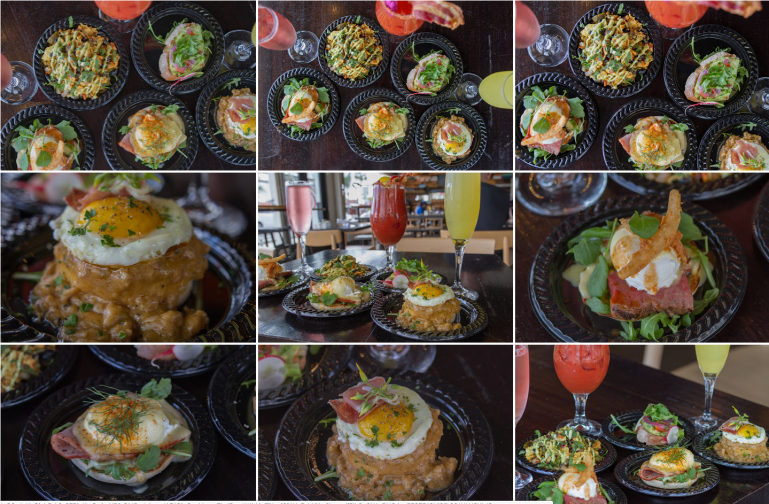 I messaged the pics to the chef and the owner of the place and they seemed happy with it.

That’s for a new planned festival later this year. Yep. It will be all brunch.

More details will come later. And I will have more brunch photoshoots. And more work.

I have so much work. And I still freelance. So if at some point it becomes too much, I can just fuck off. But I am loyal to my work and I will keep working it. Especially because it is paying me nicely. Not nice enough to live in San Diego. But great to be in TJ.

Got to cross the border a lot.

Got to take a lot of pictures.

Got to do a lot of edits.

Got to do a lot of extra work.

And if work continues this way, I will finally be able to afford shit that I’ve been meaning to buy.

Except for the more money I make, the more money I spend. Having a car is a big expense. $50 for insurance a month. $50 every other week to fill up the tank (or more). I have to pay the plates soon. I need to buy new tires.

But Donatella is doing great. The clutch is fixed. Service Engine Light hasn’t turned on. I love driving her.

I want to drive her today south of Ensenada and go camping to take pictures of the stars.

There’s no one that wants to join me to do that though.

So I probably won’t.

The PLEASURES bandcamp is pretty fucking good too.

I wish I took my camera. My pictures would have been so fucking killer.

There were a few other people with cameras there. I kept looking at them just thinking “you idiot, you are not getting anything good shooting like that.”

But maybe they did. Maybe I will find out later.

Them lights though. It was perfect for what I love doing. They made it easy to be very photogenic.

I should have taken my camera.

I need a new camera bag.

And a new MacBook.

See how I am spending all my money…

Wednesday I have work.

Same with Thursday. Another food photoshoot.

And more on Friday.

April is going to be hella busy.

May is going to be worse.

And by the end of May. Once I’m 33. I’m taking a weeklong vacation. Perhaps a bit longer.

What used to be home.

I will never have that home feeling again.

Or who knows. Maybe I’ll fall in love at some point in my life and that feeling of home with a new person will happen. But probably not. Afterlife sucks.

I miss you so fucking much, mom…

At least I didn’t shed a single tear writing the blog this time.

Oh yeah. I forgot to mention why Saturday sucked…

After brunch, editing and what not… I was sleepy from the bad night I had. So I went on Netflix and watched the new TIJUANA series with my friend Tamara Vallarta.

I have my opinions already, but I’ll wait till I finish the series to write about it all.

I couldn’t sleep. And when I was about to sleep. I heard Bryan out my door yelling for the keys to watch Cruz Azul vs Gallos Blancos.

And after that… we went to a party where I was promised free beer and the party of the year.

It was a very disappointing time. And I Ubered there. And the Ubers got pricey. The place still sucks. The beer was pretty bad. The crowd was not pretty. The food was a disaster.

Fuck did I hate every single thing about that place.

Before that. I had an alright Friday. I saw friends. I talked business. I went to bed early to get up for my Saturday brunch.

Thursday was great as well. Did work. Hung out with two lady friends (in separate occasions). Took shit tons of pics. And had In n Out.

It still fucking sucks that I can’t share it all with you.

I have to pay rent soon.

I have an extra room I am supposedly renting out. My mom’s stuff is still there. I need to clean the apartment today. Do some laundry. And get ready for the week.