Skipping the blog for a day always seems problematic.

Even for just one single day.

I treated yesterday like the weekend. I shouldn’t have. But I still did.

My rebound visited me. After going back and forth deciding if she would or not.

I don’t know why I feel like I should apologize to the blog for that.

But she’s cool. And understands. And knows.

But I actually talked about my ex a lot (or felt like that). It’s unavoidable. Rebound is vegetarian and I like taking her to eat at vegetarian places. Which… were places that we used to go together.

And I wonder about my future.

The end of the year is going to be weird.

And I have no idea what’s going to happen.

Today is the Reader’s Holiday party at Tavern and Bowl. They have some of the best mac and cheese and there’s BOWLING! I love bowling.

I’m taking the best person in the world to it. The best date I could ask for!

And that date is my new roommate.

Which is also why the end of the year is going to be weird.

Let’s go all the way back to Sunday.

Here’s an IMGUR edit that I threw on Reddit. It went nowhere.

It wasn’t a great shoot.

Nero 48 Hipster Pop-up Store in TJ and some extras

Just a few of those made it to Instagram.

My beautiful niece learning to walk.

I was trying to draw an N. It’s sort of there.

It’s a crooked M with an A arched going through it and then a T but just a line going again through the M.

As fast and as horrible as I can. It almost always looks the same. It’s a shitty signature.

I’ve done the same thing since I was like 12.

So can’t change it now!

Once you choose your signature you can’t change it ever! I believed that when I was like 12.

And I still fucking use the same fucking shitty signature.

I would make for a very lousy autograph.

Monday, my rebound made plans to come visit me that night since she had Tuesday off.

Though I wasn’t feeling too excited about it. There’s family drama and my ex is still fresh in my mind.

I discovered what she does for work.

And it makes me so incredibly happy to see her so happy in something that she really wanted to do.

Monterrey is for her.

Tijuana… not so much.

So that rebound knew this and that I keep calling her “rebound” is not really… you know… exciting. She canceled.

I met up with the new roommate. To tell him that I have a family emergency and he can’t be my roommate for a  while. He can still use the address and you know, keep shit here.

And this family emergency is only temporary until we figure shit out.

New roommate lasted one month. And most likely will be roommate again soon. And probably keep this place after.

New roommate and my date for the Holiday party today.

Thirty-one years old going to be thirty-two and after spending a year living and sharing my life with someone like a grown up… now it feels like reverts to neckbeardism.

Family drama. And this will help my mom a lot. So she’s going to be my new roommate.

After this. Rebound messaged me that she decided she was going to come!

Not mattress or a frame or anything. But the rest.

And they are all so fucking big and comfy.

Yep. My bed is nicer now.

Also. Markers. Because I was never going to buy them.

So I have to fix my whiteboard and get to work. Because I haven’t done any in a long time.

And this is EXTREMELY WORD VOMITY.

The new cover came out just now. Well… about too.

It’s not my picture.

But a bunch of my pictures by me are featured inside.

And a picture I took of Tijuana Christmas of last year.

Sigh… it still hasn’t come out.

I got distracted with predictions about the future.

And trying to figure shit out.

Conclude the blog. People like it and that’s silly. And I appreciate all that read my silly stupid shit. But it needs to come to an end.

Focus on something that makes money. Write more coherently. Reviews of food and drinks.

That’s what I did yesterday.

Took the rebound to the best vegetarian places I could think of.

We tried Dante’s GastroMed for brunch though it was already 1 pm (the new bed is really comfy). The menu was already dinner menu, there was nothing veggie, and we wanted brunch.

It was also desolate inside. Like they were cleaning or they didn’t expect customers at all on a Tuesday at 1 pm. 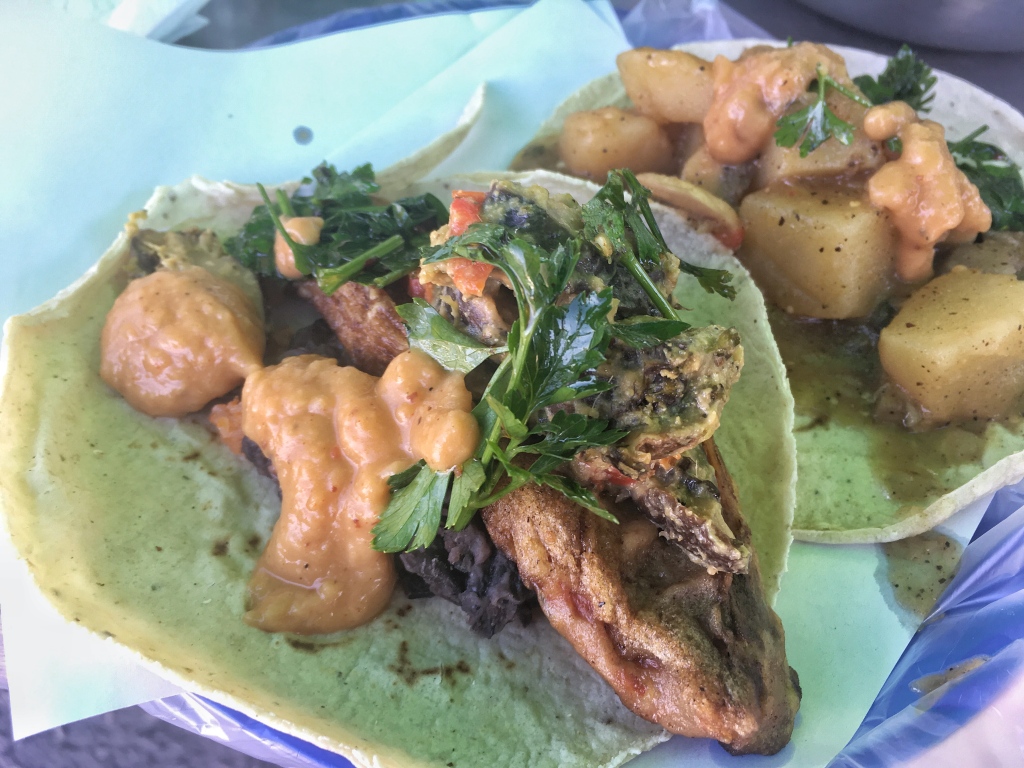 Chile relleno with shiitake mushrooms on top, some pickled cilantro, and a hummus salsa with red chiles (I believe).

It’s so fucking stupid good. So many flavors. Especially for being vegan.

Yes. I’m using that word to describe a place again. If you see it. You would understand.

There’s always a bunch of young hipster dudes attending the taco cart. This time it was four guys and one girl behind the cart.

They need five people to serve you a taco.

When El Güero does all this shit by himself.

Food is fucking great and cheap and very creative. They didn’t have their vegan birria this time, but they always have interesting vegan foodsies that I’ve never tried.

Tacon Veggie. Highly recommended for you hipster vegan fuckers. Their hipster water is not that good though. I’ve tried both times and it was pretty weak. Put more flavor in that fucking water you fucking hipster fucks!

For dinner, a place I’ve been wanting to try. Fancy upscale bullshit that I could never go by myself because I would feel SO FUCKING WEIRD.

And oh boy was this shit expensive.

Worth it. But never again.

They had a good selection of beer. I got a Perro del Mar by Wendlandt. She got a Chai tea (which was on point).

They gave us an appetizer as a compliment.

Ceviche with esquite (and I believe Cotija cheese was thrown in there, amongst other delicious little things). 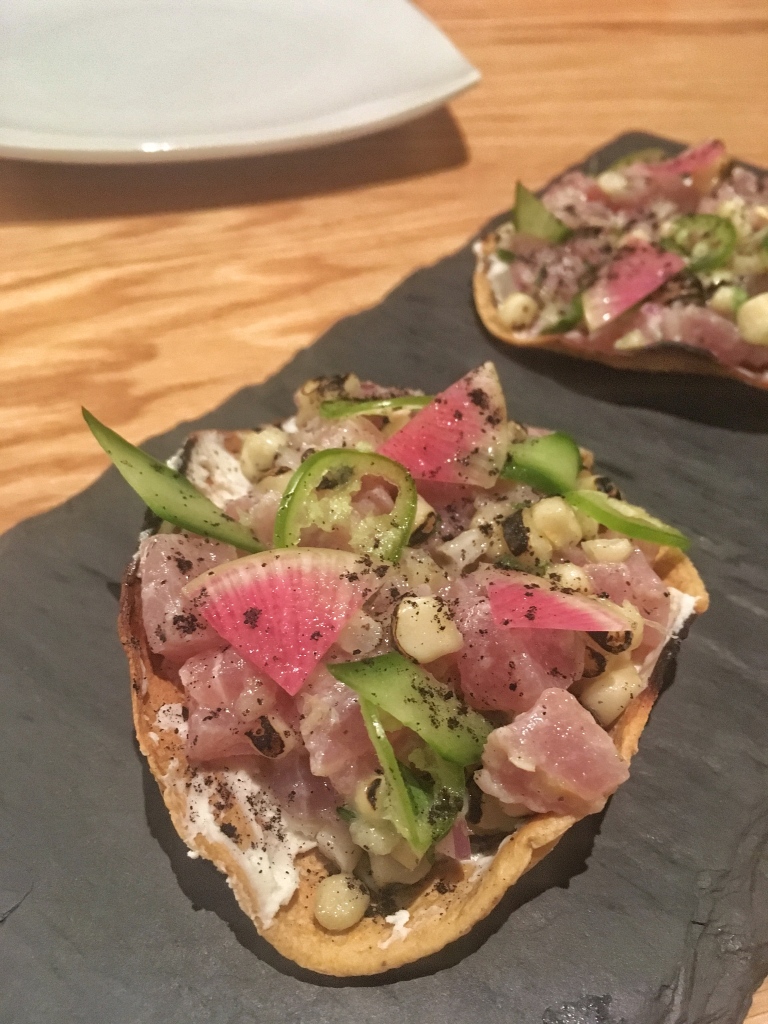 I liked it. And it was free. But also, for the price, it was okay. I would still buy it.

I asked the waiter about it. They actually sounded delicious. Could have just written on the menu “pork belly tacos.” Because that’s what they are. A friend messaged me to tell me they were real good (you see the little bubbles, that second face told me that).

Instead I opted for the ribeye with Thai sauce. I saw a picture of it on Instagram and seemed good and enough. I was also thinking about the ribeye, but the price and not being really that hungry turned me off. 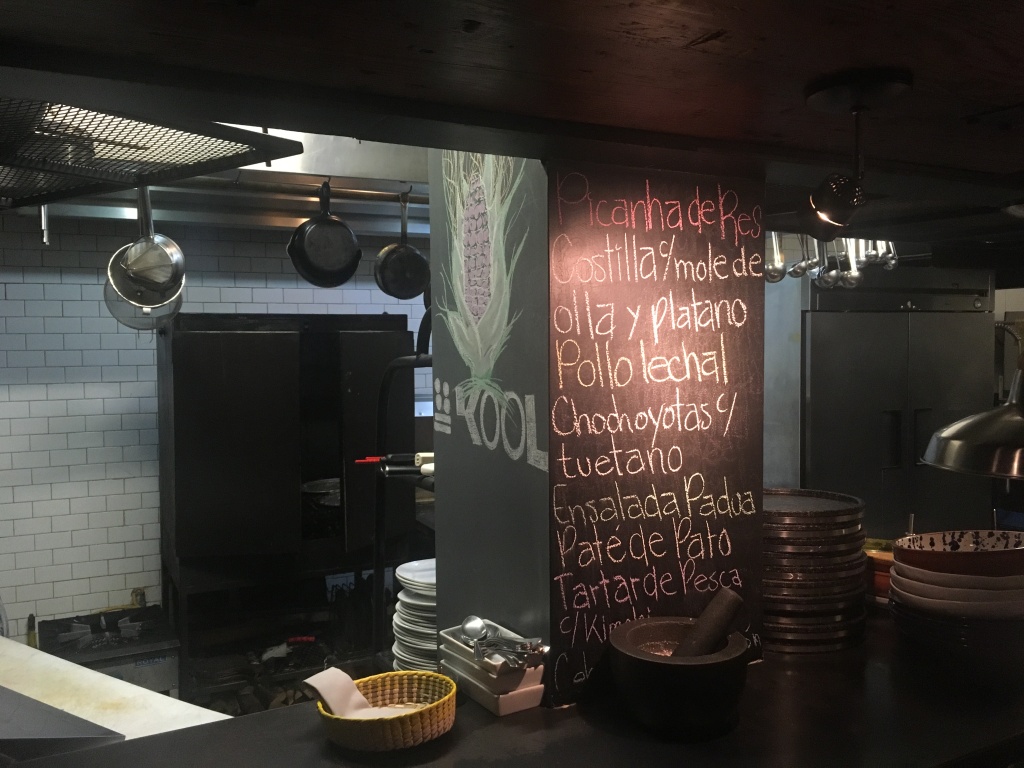 And I saw him too.

The chubby chef from I believe, Creta.

That dude knows his meats.

I have to get meat now.

Asked about it. Beef Picanha was the special of the week.

How much is this going to hurt?

$22 and a half dollars. My favorite number.

I didn’t really know what Picanha was, but it just sounded fucking good.

Apparently, it has a bunch of the fat part on it. The not fat part was beast. The fat part, well… I’m not a fan, but it was edible (compared to some fats that just take forever to chew on). And it fared well with the bites together. Ribeye would have been more of my liking, but I’m always down for new shit.

The side needed more pizzazz and flavor, but nice roasted veggies and small potatoes. 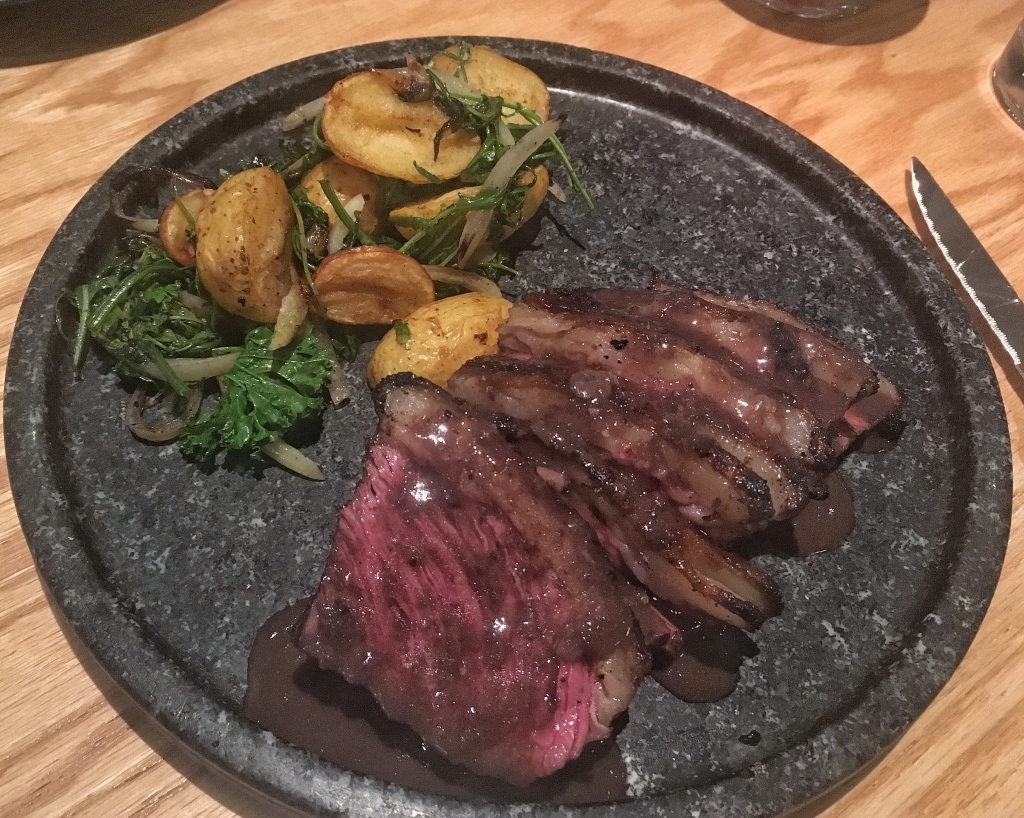 She got the risotto a la white wine with grilled veggies. 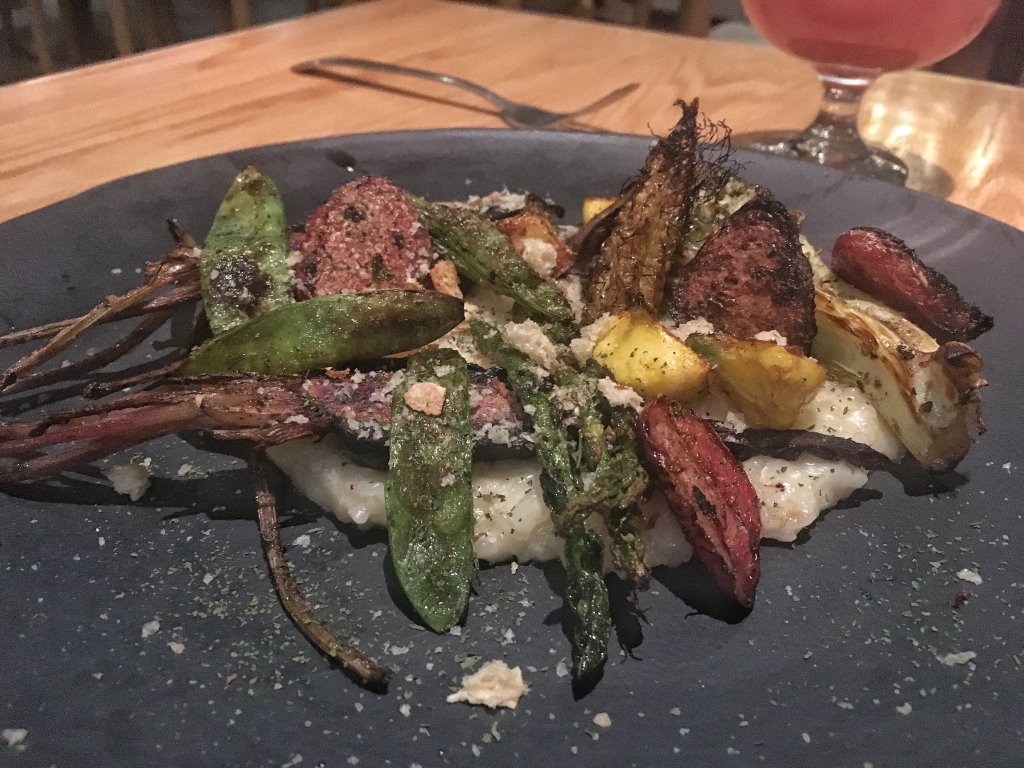 It was way more reasonably priced. Around $13 I believe. And it was better than mine. Especially for vegetarians, it’s excellent, and she was very happy with it.

Got a pink gin drink.

It was way too girly. Delicious and the topped of the drink had a mousse quality to it that just linger in the mouth. $10 drink. Worth it.

I haven’t mentioned the name of this place.

That’s probably the worst thing about this place.

WHAT THE FUCK?! Why would you call it that?!

Decor and shit are all really nice. It didn’t change much from the previous restaurant that was there, almost the same layout. The drink menu seemed similar too. My guess is that in a year or two, there will be another restaurant there. I’ve already seen like four or five on that same corner…

I can’t write about food.

I forget to take notes and shit.

Couldn’t finish the beef, took it home. They gave it to me in an Uber Eats bag. FANCY!

She went back to the border and to her campus.

I got a text from a beer friend saying it’s Tap Tuesday time.

IT WAS TAP TUESDAY TIME!

Four beers at Norte is a lot. But damn… When they 40 pesos you drink boy. You fucking drink boy!

That’s a price of a Caguama at Nelson, but for Hoppy Wheats that are just straight down fucking delicious.

Memoirs of a drunk man.

Or so is my excuse.

Thanks for reading all this stupid shit.

The cover still hasn’t come out.

So I’ll talk about that tomorrow.

And the Reader Holiday party!

One response to “Got a Present: New Bed – And A New NEW Roommate – Kool 52 and Tacon Veggie Reviewed – Holiday Party at TVRN Bowl Today!”