It’s almost noon and I just got out of bed…

I had a very wild dream. Woke up at 8 am. Thought about writing about it. Fell back asleep and barely remember what it was.

It involved my ex.

I remember we told each other that we miss each other. And that we were cuddling in my bed. The same bed. Same apartment.

But the outside was different.

It was all destroyed.

And filled with garbage.

And I do miss her terribly. More each day instead of less. But at the same time, my old life is great. I just don’t see dating anyone else or caring.

My balcony door is scary. When it’s windy, it makes a lot of noise as if someone is trying to break in.

And this was in my dream.

She was scared but sleepy.

And who was trying to break in?

Dozens and dozens of cats. They were attracted by the catnip plant.

And like I said… outside wasn’t the regular street. It was just mountains of garbage.

One tiny kitten opened the balcony door a bit and came in the house.

I had to kick him out.

Another one followed and I grabbed my water gun to scare him out. He jumped out of the balcony and I’m pretty sure it died.

And more kitties started to pile in.

Sounds wonderful… but it wasn’t. They were aggressive. I started shooting water at them and it just got worst.

Bisho was nervous. Ex-girlfriend was just trying to sleep telling me to take care of it.

That’s all I remember. And that I miss her.

She told me she won the jackpot for a job. So she’s really happy with her new job. She won’t tell me what it is until the 25th.

No idea what it is. And you will never get to find out. Since I’m most likely wrapping up the blog December 18th. Or maybe that same 25th.

But I know it’s coming to an end.

I have drama of my own. Heavy family drama. It doesn’t belong on the blog. But I need to help fix it soon. I told my ex about this. She’s curious. She has to wait till the 25th as well.

And I’ll be fine.

That’s going on my resume.

One of my tourists on Saturday told me that being on the front page of Reddit a couple of times should be on my resume as well.

Weird 2018 when blogging and front page are acceptable means to land a job in social media marketing.

But all of that is going behind a paywall for next year.

I’m going to attempt to charge people to get into this website. I’m getting a good 30-40+ visitors and around 80 clicks a day. That’s… well… fucking nothing.

Building a paywall. Charging probably $5 for access to my shit for life. And maybe one person a day will buy me a beer.

Because that’s what I’m using $5 for.

And concentrate on writing a book (according to me).

And more Tijuana Adventure. The original intent of writing about food and beer there plus doing the tours. So yeah. I’ll take one day out of the week to blog on Tijuana Adventure page and make that shit grow.

Tours are fun. Make them more exclusive. And more organized.

Fuck that. I’m not organized at all.

Adventure entails that you don’t know what will happen. And in Tijuana, you don’t.

YEP GOT PUBLISHED TODAY. Editor told me last night, “hey, sorry for not telling you before, running this tomorrow morning.” And there it is!

Those awkward interviews I did. Well… two of them were really awkward. Learning from that, I talked to them without telling them I’m a reporter/writer.

People get weird when you tell them that.

And I talked to someone I trusted for the end. And he was cool with it.

So there you go.

I finished a job!

This week. Tomorrow I pay request. Three jobs. So I did alright. Rent gets paid this weekend. The Tijuana Adventure basically paid for rent.

But I spend too much money on food and drinking…

Thursday and Friday are… well… not sure. I have to take Bisho to the vet at some point. He is okay. He was just acting a bit weird yesterday and he has bumps on his neck.

Saturday Reader’s Tijuana Holiday Adventure. We did it last year. And we are doing it again this year.

My Fantasy team did well!

But it has been a very enjoyable experience of NFL! MURICUH!!!!!!

I took 173 pictures at the mega hipster event yesterday. I’ll edit after posting this and share tomorrow.

And do some more work.

GUESS WHO WAS AT THE HIPSTER EVENT?!

No. It wasn’t the person on the title.

It was Julieta Venegas!!!

I saw people taking pictures with her and heard the whispers of everyone “es Julieta Venegas!!”

And I had my camera.

I was gonna paparazzi the fuck out of her inside and outside the event.

0 fucks given. In a ludicrous LA manner.

Though in Tijuana it would be so weird.

But I was ready. Nervous. But ready. I haven’t been a paparazzo in over 6 years…

I told my sister-in-law about it. And that I was ready.

And she was like, “nah, that’s her twin sister Yvonne.”

Julieta Venegas has a sister that is a photographer. Makes sense in why she was carrying a Canon body and lens.

I fucking saved myself the embarrassment.

Because I was truly just going to act like a fucking paparazzo and not ask for pictures and just start blasting.

Then say HI FROM LA! I’m a paparazzo.

Leave them alone (maybe… and probably follow them). Then reach out to Latino magazines or my old agency to see if they want to help me sale the pictures.

Leads me to this wonderful silly story.

Ok. Time to edit some pics.

I just discovered the missing folders in my hard drive. The months of August 2009 to December of the same year. The ones that after many back-ups, got duplicated with another year and I thought they were lost.

I remember this day perfectly.

Almost midnight. I was about to go to the parking lot and call it a day. That same day I shot Lady Gaga, Kellan Lutz, Giovanni Ribisi, Nikki Sixx, and Spencer and Heidi (or Speidi).

Before going to the parking lot, one of the guys that worked as handicapped help and ticket checker said “pstt… psttt.. I have a tip.”

He was a really awesome dude. But I knew that his tips were bad. He usually gave me tips of stupid celebrities or gave me celebrities were already on my list. So it was usually a “yeah… I already know dude.”

He said Marco Antonio Solís was sitting at coach.

I didn’t care… but went to check it out.

Yep. There he is.

Taking selfies with his wife.

Let me google this dude.

Google told me that’s not his wife…

I got excited. It went from being “don’t care about the pictures” to “whoa! I got a story!” 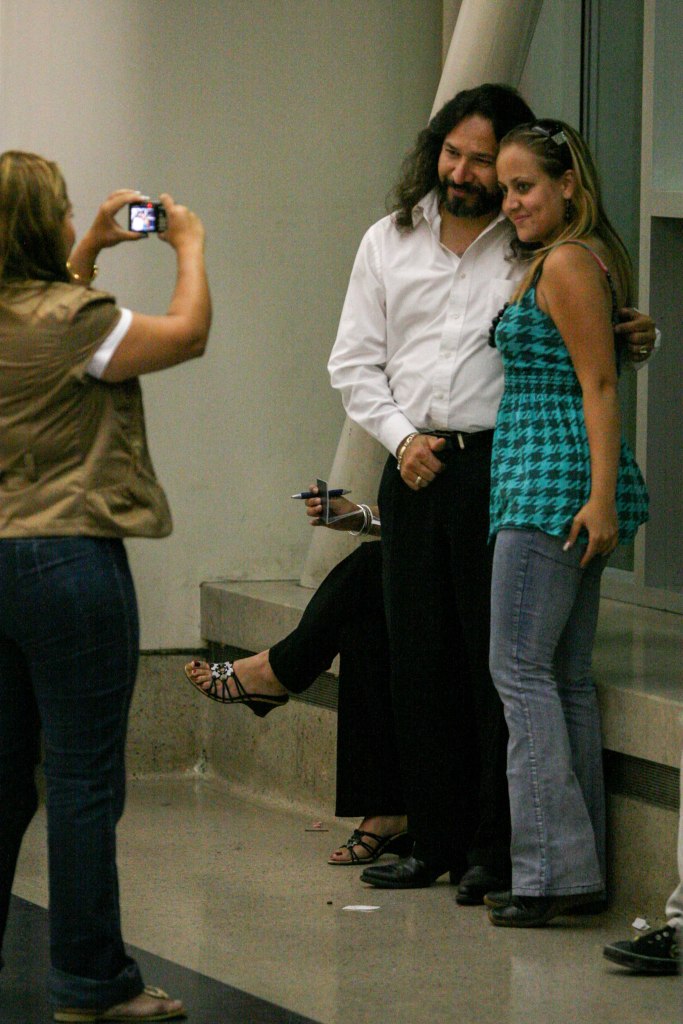 Pictures with a fan. That confirms it. Marco Antonio Solís is there with someone who is not his wife.

I keep observing them. It’s more of the same. More selfies. More waiting.

I gave it twenty minutes or so and said “FUCK IT!” Flash time.

He hands me his card.

I was embarrassed as fuck.

But had a good laugh about it.

I apologized and went to my car…

THAT COULD HAVE HAPPENED YESTERDAY!

I was seriously about to be like FUCK IT it’s Julieta Venegas and I’m going to scrape some money on this. Julieta Venegas in Tijuana. Fucking shitty Mexican magazines would buy them pictures. I could have made $300-500 USD maybe… more if there was more to a story than that.