I don’t have time for this shit today either.

I have to run out the door right meow and help my brother with his pop-up store while he goes to an appointment.

And right after that… I have a tour!

I haven’t had a tour in months…

I don’t even remember which one was my last one.

Yesterday was my last one.

But that doesn’t count.

Cassidy and her friend from college came for a mini-tour. I got paid with beers and food.

Today I actually get paid paid and also get beers and food.

And it should be fun.

And I know I need to do much much much more work. But at least I’m inspired and not wallowing in my winter depression.

Facebook just reminded me that seven years ago I got my half-sleeve.

After finishing work, I went to Szavio’s place. Dude leaves tomorrow. Right when we were to start a project.

We jammed for a while.

I miss bass so much.

I sort of want a six-string bass.

The basses that he has are not my style. A Schecter metal looking bass with a very thin neck and high bridge and too many frets. Not for me.

The other one is way better. An Ernie Ball imitation. Except… it’s way too shitty and the wiring is fuck and it’s just a cheap replica.

So neither bass is good.

I need a bass.

I had a bass at some point in my life.

It was a green OLP Ernie Ball. I got it on eBay more than a decade ago for $160.

I loved the fuck out of that bass.

I left it in Minnesota at my friend’s parents house. My Minnesotan parents. My Minnesotan mom sold it and I got cash from her randomly one day and she explained why.

They moved out. My shit was there. She sold it at a garage sale.

I’ll get another bass.

The problem after that is… I need a bass amp.

I don’t really have money.

And I need to save for a car.

Did not have time at all to do this.

I had a crazy busy day and night.

Right before my tour was about to start, an older client and now Tijuana addict told me he was coming down. We coincided on the border and said hi. He was by himself and told me a friend canceled last minute so he decided on doing a solo Tijuana Adventure.

I crossed the busy border and met my clients right away.

Three Asian, one white guy. I think they all went to Cornell University.

I deal with cool people only.

And cool people they were.

We covered a lot of ground.

And it was a lot of fucking fun.

The tour started at Norte Brewing because it has too (either that or Nelson).

It was followed by the super mega hipster event called Nero 48 pop-up store.

Before the tour started, I did a favor for my brother/sister-in-law of being in charge of their booth in that super mega hipster event.

It was a level of hipsterness that I have never felt in my life.

The hipster bar was set high.

So yeah. Hipster as fucking fuck the fuckity fuck.

I was there for a couple of hours until my family arrived. And then I went to do the tour.

One of the tourists, who came from San Francisco, as soon as we entered the pop-up store… said exactly the same thing.

“This is one of the most hipster things I’ve seen.”

And this is coming from an Asian girl that went to Cornell and lives in San Francisco.

I… uhmm… I’m pretty sure she knows hipster.

She even told me she has been in Mexico City (and will be there again) and found it hipster as fuck.

But that pop-up store…

Yeah… another level of hipster.

From hipster to hipster.

We did the long walk to Teléfonica. Passing by the cat café. Going through the hidden Chinatown that is there but not there. And Teléfonica.

We ordered food from almost everywhere. No diet restrictions. They ate it all. And we drank more beers.

Bellies full. We did the long walk back to downtown. It was either that or Plaza Fiesta. But Plaza Fiesta hasn’t been all that it could be. And the crowd there went from being hipster to just young and obnoxious.

I overuse the word hipster.

One of the guys mentioned mezcal. So Mezcalera was the obvious choice.

But why not continue with the hipsterness in the hipster paradise of the bizarre border city.

Those fuckers are so good.

But so damn good.

They wanted to ordered food. I told them to save their hunger for street tacos.

It was still early.

La Mija and El Patio were closed. Which is disappointing because of the pink limo and all the other extreme hipster paradise offers. 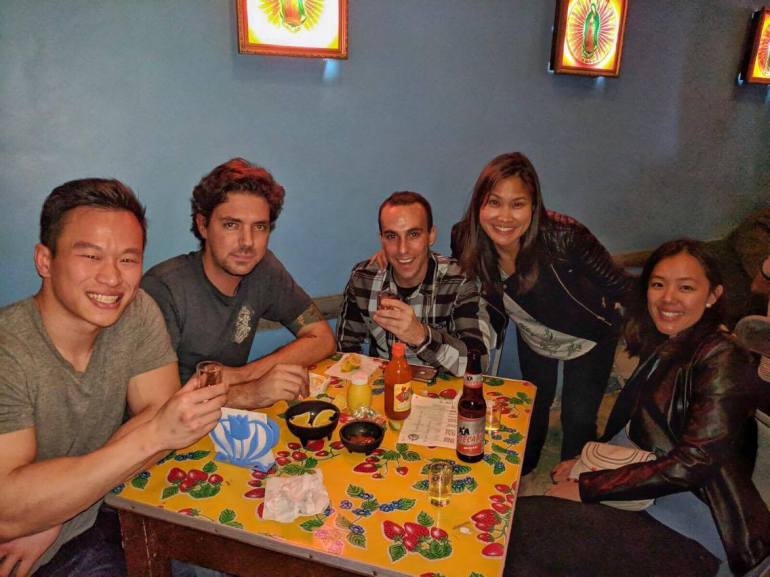 Only one person didn’t eat the crickets…. guess who?

After that, we stumbled out to the destroyed Calle Sexta. Crossed a “bridge” that was just a plank bridging the gap that looked non-OSHA as fuck.

One person insisted on the red light district…. guess who?!

So we did the walk through the danger zone.

And didn’t go inside anywhere. It was a bit overwhelming.

I gave them the choices of dive bars, craft beer, or drag queen shows (that were nearby).

Guess what they picked?!

It was a Juan Gabriel imitator that went for far too long.

And then a Beyonce looking diva (who was imitating someone else, but I’m not 100% great with gay Mexican pop… )

And the bar was…

We were next to the stage, wardrobe, and the bathrooms. Drunk old Mexican men went by us a lot and some stayed, danced, tried to grab our attention… and more.

Street tacos for sure.

Who I used to love, but I don’t eat anymore. They fill me up way too much.

It’s always a hit with tourists though.

And they are great.

Stopped by Nelson (just to use the bathroom) and back to the border. Crossed the eerie bridge. No border wait. And back by myself to Nelson.

ALL PICTURES BY KEVIN.

I don’t know his last name

But all pictures by him on his Pixel phone (quality is amazing… sort of want one).

And holy shit… Nelson’s was packed.

The dude that Tijuana Adventured solo.

And a couple of Americans that we saw while walking where there as well.

How the fuck did that all happen?!

I have no idea. But the party Matt was on. Pachangas Matt.

Not fully on. So… half-mad dog Mateo.

Because they went to Hong Kong after a while and I refused.

I was about to go home… when I get a message.

From my friend Juan.

Who I haven’t seen for a while.

He told me he will buy especiales and he was on his way.

And more people showed up.

I don’t even know at that point I started losing track.

I magically woke up before 10 am without a hangover AT ALL.

I believe it’s the mezcal that saves you from a hangover.

Even after that much beer and a couple of especiales.

I woke up feeling great.

NFL Sunday of being lazy.

Though I got to shower and do some adulting.

I sort of just did. But need to work out and shower and get out of my apartment to go help my brother again.