I should be leaving right now.

I haven’t adulted in a while.

I tried to yesterday.

I interviewed three people. In a very awkward manner. But I believe I got what I need.

Not having a beard makes me a hundred times whiter.

More people on the street offer me drugs or ask for money.

After my awkward as fuck interviews… I went straight to Nelson.

Where mariachis were singing.

And I tried to get rid of my depression with caguamas.

It sort of worked.

It was better than staying home.

After a couple of caguamas, I decided to walk around and maybe interview someone else. And that’s when my brother gave me a call. He got a new refrigerator and he needed help moving into his house.

The baby is already starting to walk.

Coffee. And I should go.

I don’t have time for this.

Cool. I was about to email clients confirming the tour on Saturday… and before I did. They sent me a text message confirming.

And tomorrow I’ll work and send an article.

Right now I should really leave.

Getting ready and shit.

Didn’t have time to word vomit. I had to adult. And it was a good day of adulting.

But before I get into that. I went to Dragon Rojo. The Red Dragon.

The owner had been hitting me up that I should check it out. That the music is good. Caguamas are cheap. And the atmosphere is picking up.

I went back to Nelson and there wasn’t a spot at a bar and the tobacco air was heavier than usual. So I said fuck it. Let’s check out The Red Dragon.

Got a caguamon for 55 pesos.

The bartender was bored as fuck staring at her phone. I asked for the wifi password and she wrote it on my phone.

You can control the bars TVs with the wifi…

It’s 10 pesos to play a song on YouTube. Or with the wifi, you can just be a dick and play whatever.

The other people in the bar were a waiter and waitresses and a lesbian couple. Bar was dead.

And I sat there alone with my caguamon.

Wondering what song to play to interrupt the flow of the TV.

The waiter was doing the choosing. He was playing a bunch of Dragonforce songs and sang with them.

What a horrible joke of a band.

I’ve never really listened to more than one of their songs. Holy shit. Watching a bunch of videos… how terrible.

Helman Riiiii looks like a nice guy… but holy sloppy cheesiness. Tapping with picks is just an insult to god. Pointless sweeps. So much fast. So little significance. And I thought I did too many notes and taps. Their guitar solos just sound like BLLRLRLLRGLGRBRLRRARGGGBRLLRRLGLG WHEEEEEE

That’s my review of Dragonforce.

And on the video… the keyboard player had a theremin.

And he played it often with magical gestures.

You could never even hear it…

Right before leaving Dragon Rojo and after thinking about what song to play for the longest time… I chose Baby Metal.

I timed it perfectly because the next video was going to be Bunbury and I only had one small cup of beer left.

And then the dude that was playing Dragonforce went like “who the fuck played Baby Metal?” and immediately switched it to Bunbury.

And noped the fuck out of there.

So I probably won’t go back for a while….

And I went back to Nelson.

The girl with the green hair told me not to play jazz.

I did. But then I didn’t. The coin I threw in the jukebox was for half of jazz. Then I realized that the jukebox had 3 extra credits that weren’t mine. I played a bunch of Beatles and Ramones.

That was two nights ago.

Like I said. It was a good day to adult.

Crossing the border was a breeze. I got in the trolley on time and heard my name being yelled out.

None other than the great Tony Tee was riding the trolley to go work in his torta truck.

We caught up for a while as he told me his travels through Culiacan. He offered me breakfast at his place. I told him I’ll pay him with pictures.

This is the torta that he served me.

It was better than I expected.

I was a bit too hungover to eat it as happily as I would have. But it was good. The burnt cheese on the bread was the best part. The salsa for the albondigas has a nice kick to it. The Cotija cheese was way too salty. And it was a filler. You just need one torta to be good for a few hours.

After that, I drove to Ramona for a place that was mentioned in an upcoming story.

I was treated to a nice wine tasting by Rafaella and El Profesor de Vinos.

Malbec, Nebbiolo, and many others that I don’t remember. The wine professor was from Spain so we had a nice chat about wines.

Those were some of the best wines I’ve had in my life. They were all superb. The dude gave me a test of his favorite one and it was so complex that my head couldn’t really determine what it was.

My favorite were the first two. But they were so nice and smooth. With no alcohol hint. Just plainly delicious.

Better than anything I’ve had in Valle de Guadalupe.

And in a way… I sort of gained a new respect to wine. I haven’t had a good experience with it like that.

“Life is too short to drink cheap wine.” Cheesy quotes that all winos have.

I drank a very expensive bottle of wine and was disappointed. Since then, I stopped giving a fuck.

Now I want to try more.

Baron Balche was the best thing I’ve had in Valle. But it is also insanely expensive…

After wine tasting and taking pictures of the place… one more small mission.

A desert place in the middle of Asia town San Diego.

Though the desserts looked fantastic, I wasn’t hungry. So I declined the free one that the dude offered.

It was weird interaction since they didn’t speak English. I had to pull out the magazine and show them who I worked for and where the picture will be. Then they were happy to have me there.

Those pictures. Next week.

After that, I went to the office for a while. Hung out with office people while pictures transferred.

Then back to my brother’s office. His new office.

He still had a while before he got off work. So I went to the pier to take pictures of the sunset and other silliness.

That’s the only one I uploaded on IG. But at least two more will be on there.

I barely made it to some pretty colors. 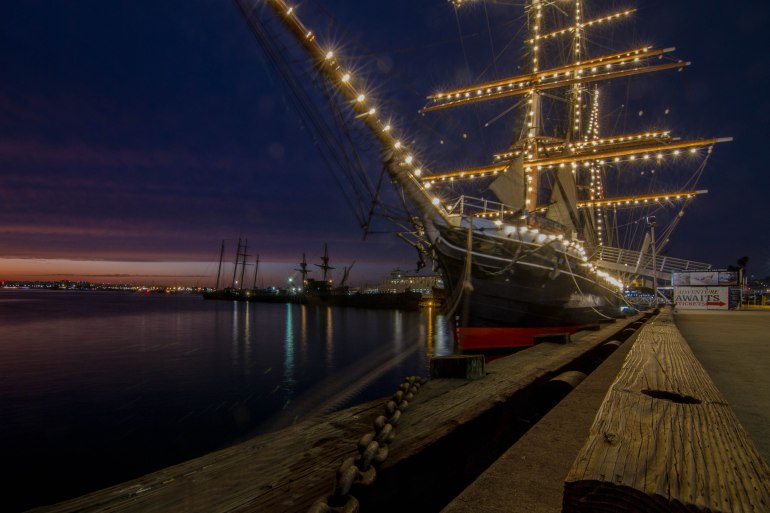 The Star of India.

I tried some stupid light painting. That was supposedly a star…

Another float thingy nearby. There were other photographers doing similar things. I wonder what their shots look like.

After taking a few shots… went to Karl Strauss to drink a couple of beers while I waited for my brother to get off work. Back across the border together. And… out for some tacos and one beer at Nelson.

I came home to edit the pictures until past midnight.

I didn’t even have to edit them since the office already has them… but I still feel like doing it.

Today I have to cold shower. Then work. Breakfast and coffee are done. Workout and shower and work are next.

Today I seriously finish one article and send it.

No fucks given. I have to do it.

And next week. Next week is working on the longer article. The one I was supposed to be done with already. Nope. Letting that to marinate for a while longer since I’m trusting that going long is the right choice.