I haven’t been in this bar in years. I never took my ex here. My first true TJ self.

I never took her to Nueva Pachanga. My other true self. Well…. just the night we met. Then Zacas. And we never went back.

I never dared taking her to those places. True raw gross Tijuana. It would have been too much for her.

I took her a few times to Nelson…. and we fought every time. My true Tijuana self.

I also hooked up with a waitress from this place. One of the reasons I avoided it.

It’s so different yet still the fucking same.

Jukebox as “random” as it could be.

It only takes dollars.

I’ll throw in a dollar.

I know this jukebox.

I can’t believe I haven’t been here in years.

Last time I was here I got offered heroin in the bathroom. And I thought about it. Obviously, I didn’t. Not then. Maybe when I’m 88.

I haven’t been to the back. So I have no idea how it is….

But I used to come here a lot.

As often as I do Nelson.

And I’m sort of liking it….

It’s better than where I was.

Shit can go in any direction.

Though most likely it will be going home.

The dude that plays Slayer and Metallica songs and growls while chugging a caguama is here.

And there he is.

At the end of the bar. Caguama in hand. Waiting for his songs to come on.

Someday his mate will come.

Someone who appreciates his growls and love for old metal.

He will come to Chips forever until he gets it.

The floor is different. But not much else.

I sort of missed this place.

I can’t believe it has been this long….

And I still haven’t touched Tropics.

After almost an hour of jukebox good shit… Slayer. And he is so excited.

His growling and doing horns with his hands while getting excited about Slayer playing on the jukebox again.

I wonder how many years he has been doing the same routine.

There is nothing else.

People have their own shit lives.

Nothing compares to Slayer + growling at Chips bar Tijuana.

Happiness is not a warm gun.

Happiness is growling at Slayer on a shit jukebox at a shit bar.

And now I go to bed.

Hah. I wrote all that at Chips last night. Funny stuff.

I really haven’t been in more than a year. I’m glad I did. I enjoyed myself. The jukebox had decent music playing. The place was lively. There weren’t any methheads or heroin junkies in the bathroom. It just reeked of weed.

Someone got shot there earlier this year in March. But it seems to be doing okay.

And I want to go back. Get a break from Nelson. Where they know me as the dickbag that plays jazz. Everyone hates jazz.

Now I’ll be able to do it in Chips for a while. Because they have a couple of Chick Corea albums and some Coltrane. I’m not sure what else they have. But they for sure have way more options and weirder music.

Before Chips… I was at Nelson.

My friend Kimby texted me out of nowhere that she was coming over to go to a show at Deck 22.

I told them to meet me at Nelson and she arrived with a friend of hers (I think his name was Chris… I’m gonna say Chris).

We had a couple of drinks at Nelson and then to Deck 22.

I didn’t want to pay the cover charge because I didn’t even want to be there, but luckily, I knew the guy charging at the entrance and then realized that I knew the ones responsible for the show.

Electronic music until the wee hours of the morning.

I drank a beer. Checked out the place. It’s really nice and big. Great potential. But again… meh… not for me.

I said my goodbyes.

Went to get a slice of pizza from Volo.

Then ATM because I was running low on cash.

Today has been NFL all day.

I’m doing horribly in my Fantasy League yet again. I’m beyond bad. At least I have two wins. At least I’m not the Cleveland Browns.

And it has been fun. Stupid NFL American fun.

After this next game… you know it.

I’m going to Playas to visit my parents.

And I have nothing.

So here’s a picture I have already posted before but I like it. 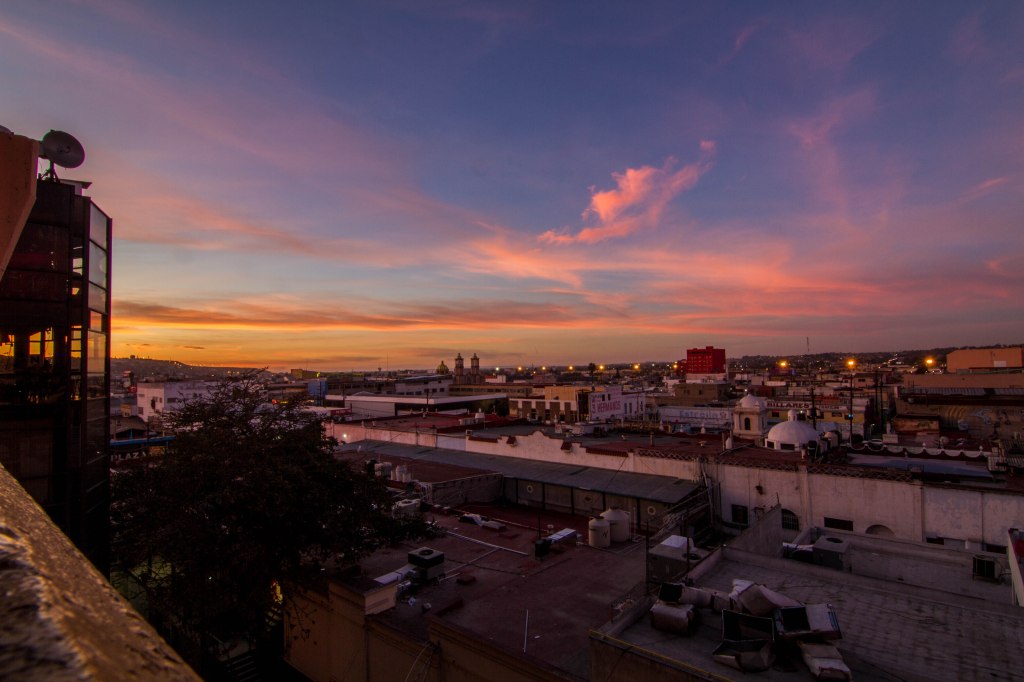 I wonder if I should take my camera.

It could be a great sunset in Playas. It can also be very meh.

And I’m not even sure if I’ll be by the beach.

I want to do more photography shit.

But no more sunsets.

I’m sort of sick of sunsets.

I want more subjects and street.

Fuck it. I am taking my camera.