My girlfriend is packing her bags.

On a jet plane.

Should be back again, around the new year.

I probably will go to Monterrey to visit her. And then come back with her together.

To our new apartment.

To a new year.

Yesterday was that. A lot of walking while apartment hunting.

Breakfast was at “El Tacón Veggie,” a street taco stand that serves vegetarian tacos varios in La Cacho. There were two hipsters sitting on the lonely table outside when we got there. Two other hipsters were behind the taco stand. As we approached the stand, the guys on the table got up.

How many hipsters does it take to run a vegetarian taco stand in Tijuana on a Saturday morning?

Apparently, four of them.

There was a fifth as well.

Tacos were surprisingly good. A birria taco that didn’t taste much like birria. I think the one from Veggies Are Us is more birria like, but this one was tastier. Point Tacon Veggie.

I also got cauliflower “capeada” with egg topped with garbanzo with chile morita (not spicy at all). It was very good as well. I also like cauliflower and rarely encounter it that it makes me happy when I do. Definitely will go back, though it is pretty far. 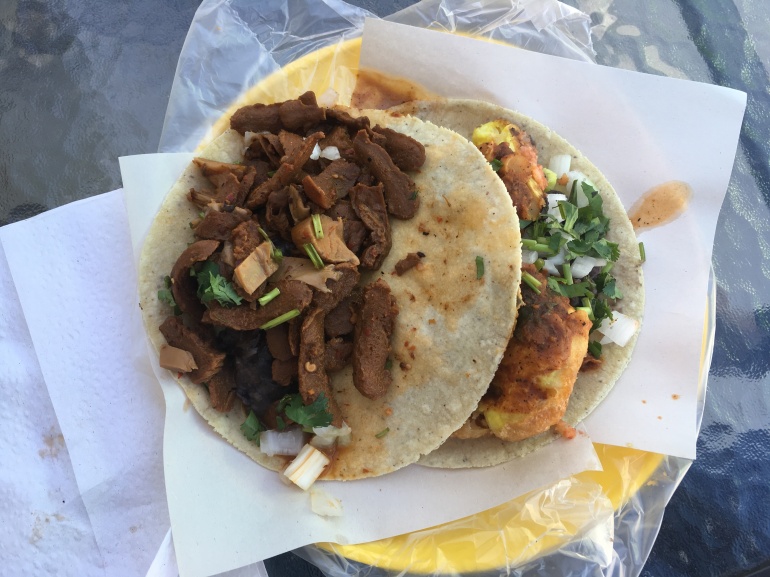 Girlfriend really liked it. So we are definitely going back eventually.

We walked around Cacho again in a different area to see apartments. Nothing was for rent besides the ones we already asked for.

We ended up walking in Colonia Morelos where there is a skate park. We saw a house for rent and we were going to call the number when a person in the car asked what we were doing.

Turns out they were the ones renting the house and were waiting for the painter to arrive to have it repainted.

So they let us in the house. Nice place. Three bedroom small house with a back patio with potential. Only one bathroom. And the bedrooms were quite small.

At first, we were liking it. And then we remember that the Penthouse that I really liked was that price and was way bigger and in a way better area.

That penthouse is gone.

I still wish I tried to get that. It looked so nice in pictures. I have a feeling that it would have been great. And at $800 it was a steal for the area.

But that penthouse dream is gone.

As we walked out telling the landlords that it looked really nice and we were going to think about it, I remember that I messaged some other place to check it out. Just when I told my girlfriend I haven’t heard back from them, I got a call.

It was an older lady telling me she was out of the city and haven’t been checking her phone. I asked if I could see the apartment. She said that same afternoon at 6:00 pm.

We kicked it in the apartment for a while until 5 pm.

They are getting close to relegation.

Szavio the Wiseman came kick it for a while. I’m writing his story. Let’s see how that goes.

And then we did the long walk to Zona Río where the apartment was located (nearby Mision 19). The Señora was a really nice older lady. I think she liked us as renters and saw potential.

It was better than the house. We liked it better. The apartment building is in a nice location and I could see myself in there. Three smallish bedrooms, okay living room, nice kitchen, small outside balcony with water heater (however, no view). I could fit in the shower, but the two bathrooms were pretty small.

Girlfriend saw herself in there.

Again, at first, we were like, yeah, we should.

We walked to Plaza Fiesta since we were in the area (and I wanted to measure proximity). I had a beer at Brew Pub. Girlfriend just wanted to leave because it was loud. But I wanted to think about the apartment and have a beer.

I also got hungry and grabbed a slice of pizza from Napolito. We were going to buy a full one, but they didn’t have exactly what we wanted. So a slice of mushrooms instead. It was okay. Great for the price.

Beers at Brew Pub were on point. I had their IPAs (one Mosaic the other Citra). Surprisingly, I liked the Mosaic better.

We grabbed the chess set from the bar and played.

I beat her in all the games.

Well… one of them was odd. We didn’t realize she was on “check” while we did other moves and then when I was going to “check” again I realized that she had been on “check” for a while. It was too late to go back. She didn’t like that result. I just toppled my king. So technically she won that one.

The others I won.

She wants to play again.

After playing chess and much consideration, I decided that that apartment in Zona Río won’t cut it.

It was just a tad too small.

We came back home and watched What Happened to Monday? (from scratch, since I haven’t seen anything and she still had half a movie to go).

OH GOD! So many shitty loopholes.

Congrats to the actress. That was superb. The bad dude didn’t look that bad. And the premise is interesting… but at the end. FUCKING STUPID. I just kept shaking my head….

Why would you kill dozens of people (and mostly bystanders) just to kill “6 more” that are supposedly overpopulating the earth? And after 30 years of implementing the overpopulation rule, shit hasn’t gotten better? Just worse?!

It was a good movie though. Entertaining. I just kept getting annoyed at all the loopholes. They killed the poor doorman that was just a nice doorman!

While watching the movie, we drank this:

A good IPA and a great sour ale (and my favorite beer so far this year).

The neighbor was having a party upstairs. A party for three people. His girlfriend (and soon to be wife… congrats neighbor!) and two other strangers.

They had free Kokopelli tacos. I wanted to stop by and say a quick hi. Steal a taco and just leave.

15 minute before the movie ended, Juan the brewer of Ley Seca, asked if I was going to the party because he saw on FB that it said I was going. He had no idea I lived downstairs.

He gave me a perfect excuse to go and not just be in a sea of strangers.

After the movie, I went to meet up with Juan, have some beers, and eat some tacos.

I also got a chance to talk to the neighbor for a while (and congratulate him). I still owe them 200 pesos.

That penthouse upstairs is awesome. There were more than 30 people in the party and there was still space.

I left the party after a while. Came back to a sleeping girlfriend. Watched the series Big Mouth (which is still pretty great).

I woke up before dawn with moving in my mind. Moving to where.

I came to the conclusion that….

I came to the conclusion, and what really felt good in my heart and mind the more I thought about it….

At least for now.

I let go of that awesome penthouse. There’s a penthouse upstairs that is my fantasy. I haven’t found anything really convincing. I really like this apartment though it’s falling apart. But it’s nice, spacious, cheap.

And I’m not ready to move. Much less without a girlfriend who will be in Monterrey. And not now.

The con is still that I really can’t have a car here. And I’m not sure if either Joshua or Andy would “move in” here. But this is still better.

I have to talk to the landlord and tell her about my decision. And hopefully, we can talk about fixing up the place. And most importantly. Getting hot water.

So much looking and bullshit just to come to the conclusion that I’m not moving anywhere.

That was dramatic huh!

I’m still going to be looking at places, but much less frequently or concerned. Who knows. I might find something great. But as of now. There isn’t such a thing.

That apartment in Zona Río was okay. I liked it. But that was it. Just okay. It wasn’t amazing. It wasn’t what I really wanted. There is no point on moving, doubling or tripling my rent, and not be happier than the place I am now. This room is pretty big. This apartment is pretty big. I haven’t visited an apartment or house with a bigger room.

It’s my girlfriend’s last Sunday. Her friends are coming over to the apartment. I haven’t showered but shall soon.

This morning after waking up very early, I waited until NFL and I saw how fucking bad I’m at Fantasy Football.

Again I lose. Again I have the least points in the league. Again I suck.

I am no good at this.