I was busy watching sports.

I’m trying to find the chart which shows me which days I have skipped in the year but I can’t find it. It’s been less than a dozen though. I think yesterday was skip #10.

88,868 total views of my web page. Four years of existence. One year of daily word vomiting.

What will happen next?!

The end of the year is going to be really odd.

I just got up and did one push-up. My whole body aches from soccer still. I can barely walk. My wrist hurts a lot from crashing into the fence (the soccer field is fenced in).

I’m sore all over.

I should workout. But can’t.

I did horrible in my fantasy NFL team.

Fifth place out of six players. And most of them don’t take it seriously. Only one of them. And me.

And I did fucking horrible.

I was losing 87 points to 104 but still had more of a chance to win the match.

It all came down to Jordy Nelson. He got injured in the first quarter of the game and didn’t even get to play.

I stayed at 87 points and lost again.

At least the Chargers lost.

I’m going with Raiders this season. I have Derrick Carr as my quarterback and Marshawn Lynch as my running back. I need Crabtree as a wide receiver to be a fantasy Raiders team. But no. Sanchez, the guy I was against this week, has Crabtree and fucker scored shit tons of points. Another reason why I lost.

I need a better fantasy team.

It was a highly entertaining match. Unfortunately, it didn’t pan out for my Gallos. It usually never does.

And neither my fantasy team.

It sucked for me.

There was also some family time. My brother picked us up for lunch (my girlfriend and I). He was with his wife and baby girl.

We went to La Cevicheria Nais. I wasn’t very hungry so I got a giant clamato beer with shrimp and octopus.

It was a deception. I had ordered it before and it came with plenty shrimp and octopus inside the beer. This time it didn’t. Just that big skewer on top.

After that, my brother let me borrow the car to see an apartment in Playas de Tijuana that looked interesting.

A three bedroom apartment for $560 a month, near where my parents live (which is a nice area), included a hot tub and two bathrooms.

From the pics they sent, the place looked really nice.

Like the rest of the evening…. it was bullshit!

No wonder it was so cheap.

This is how it went down.

It had a nice façade on the front. Modern looking building with maybe a bit of fixing to do.

A long tight hallway that led to some stairs. Oh, look. Ocean views. So far so good.

So far so fucking good.

Apartment. Nice. Kitchen with a small dining area. A tiny long room that made no sense and had one sink. It was an attempt to a bathroom and then nothing. The kitchen didn’t have a sink. So that tiny sink in that weird tiny room was the cleaning area.

This is the living room, right?

This is the first room. Well. This doesn’t make sense. To access the other room you need to go through this room, so it’s not a room, it’s a living room.

It counts as a bedroom I guess….

Next room. Oh. This could be a little lounge area.

WITH A GIANT HOT TUB FOR FOUR PEOPLE. A weird fucking bathroom with three toilets. And a couch that was all fucked up.

It was more like an awesome weird one bedroom apartment ideal for parties or for a crazy bachelor. Or maybe a family with one kid.

But it wasn’t a three bedroom apartment.

It’s not a three bedroom apartment when one of the rooms has toilets and a giant hot tub. That’s just a really big bathroom.

It made no sense.

Here are some pictures so you can picture it better:

That’s the “master bedroom.” The wall that doesn’t reach the ceiling is where the three toilets and a shower were. The other door is to nothing. Not a balcony or anything. You can just jump out of the building there.

The other bedroom… which was connected to the gigantic bathroom.

Which was connected to this “other bedroom.” That had its own bathroom… but to get to the other bedroom you still have to walk through this bedroom. Fucking stupid apartment.

There was also a two bedroom apartment available.

The one bedroom next to the kitchen had a toilet behind the door and a shower with a bathtub. So again, a giant bathroom that also works as a bedroom, but fucking weird.

The other room was pretty basic and had a small closet in the corner. I opened the door. NOPE!

Not a fucking closet. The water heater was in there.

There was another door next to the room. A tiny fucking bathroom.

Like they fit an entire bathroom into the closet.

We were thoroughly disappointed and felt deceived. Fuck.

Here are some pics of that place:

Behind that door, there was a toilet. Yep. Just like that. And behind from where I’m taking the picture, there was a bed. So this was a bedroom…. 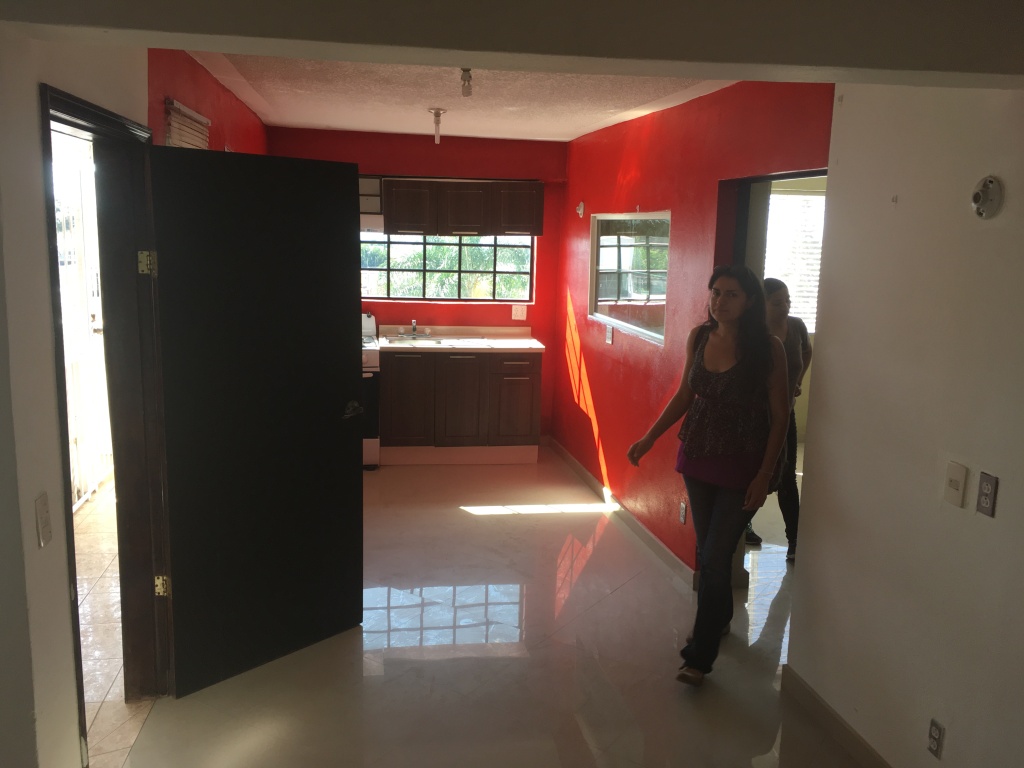 My girlfriend leaving the weird room disappointed. This was the kitchen/living room. Behind me, there was a tiny door that led to a tiny bathroom and another door that had the other bedroom which seemed normal but had a closet with just a water heater.

After that, I gave my brother back his car. We walked to a house that I saw listed online. My girlfriend liked it. She didn’t like the pictures online, but looking at it, she liked it a lot.

But of course, this is a fantasy house. It’s $850 a month. But it’s a five bedroom with an extra study. I really want to live there.

We walked to downtown and my girlfriend loved how close the house was from downtown. It’s a great house. We had one beer, went shopping for groceries, came home. Girlfriend made pesto from scratch. It’s delicious. She also made me a grilled cheese pesto sandwich. It was delicious.

And we shared this heavy beer. 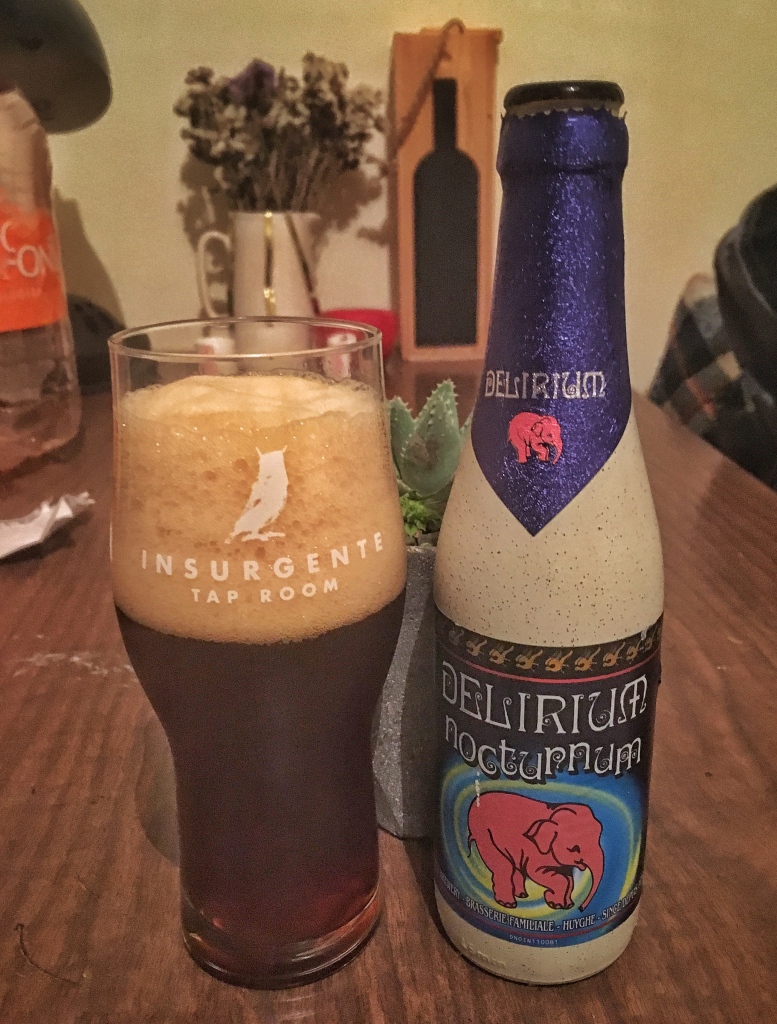 And watched a really shitty movie that she chose called Perfect Pitch 2.

It’s a really good shitty movie. Very well made and produced. It’s about singing fucking acapella which I fucking hate. But some of the covers were really good. Some jokes were alright. And it had a bunch of comedians that I like a lot. But it dragged. And it was fucking stupid.

Basically, the same thing as that cheerleader movie but with acapella groups instead. It’s a great shitty movie for silly purposes.

This one I like. The other three I have to do this week SUCK! Well… one is fine. The other two are awkward and shitty. I have to make a lot of phone calls and emails today and organize the following cover shoot. Let’s see how that goes.

Should be a good busy work week. Better than last week where I just worked in one single piece that cost me some trouble but ended up nicely.

I find out tomorrow if the editor looked at it. Let’s hope he liked it. I liked it. It took me five days to work on that shit. I take too long working on some pieces.

And some… I do in less than an hour.

I haven’t chosen anyone.

Anna Kendrick was in that movie yesterday playing one of the main roles.

I saw her a bunch of times.

Brittany Snow is also in there and her name is super familiar but I can’t remember her face at all.

Nope. Didn’t find Brittany Snow on my hard drive. Found other random pictures of snow from when I used to fucking live in Minnesota and there was fucking snow everywhere. 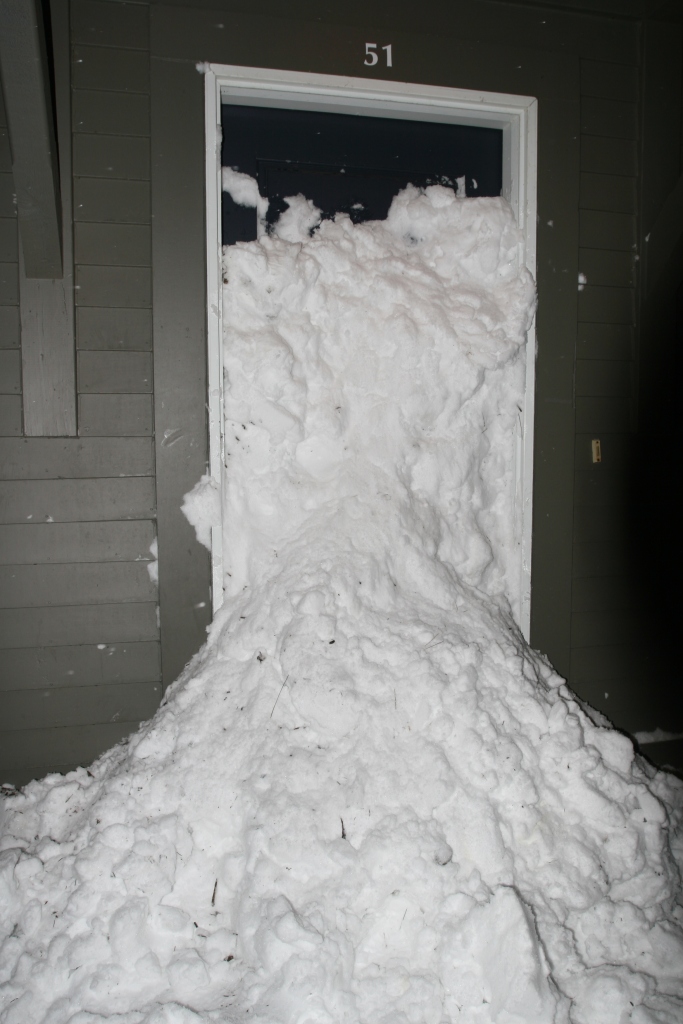 I found that and a lot of other stupid bad pics of snow and college parties. Horrible pics.

I thought I saw her a couple more times, but two sounds right!

She wasn’t even that famous back then. I think back then she was only on Twilight and shit. She’s huge now!

I remember she wasn’t nice. But who cares.

Let’s see what I got.

I don’t remember either shoot. Both sets are meh. I just remember her being the least likable from all the Twilight kids. But that might be because she has a resting bitch face and I had no idea who she was. I like her as an actress, so maybe things could have been different…

The first set is from October 23, 2009. Shitty flash session late at night in Terminal 3. 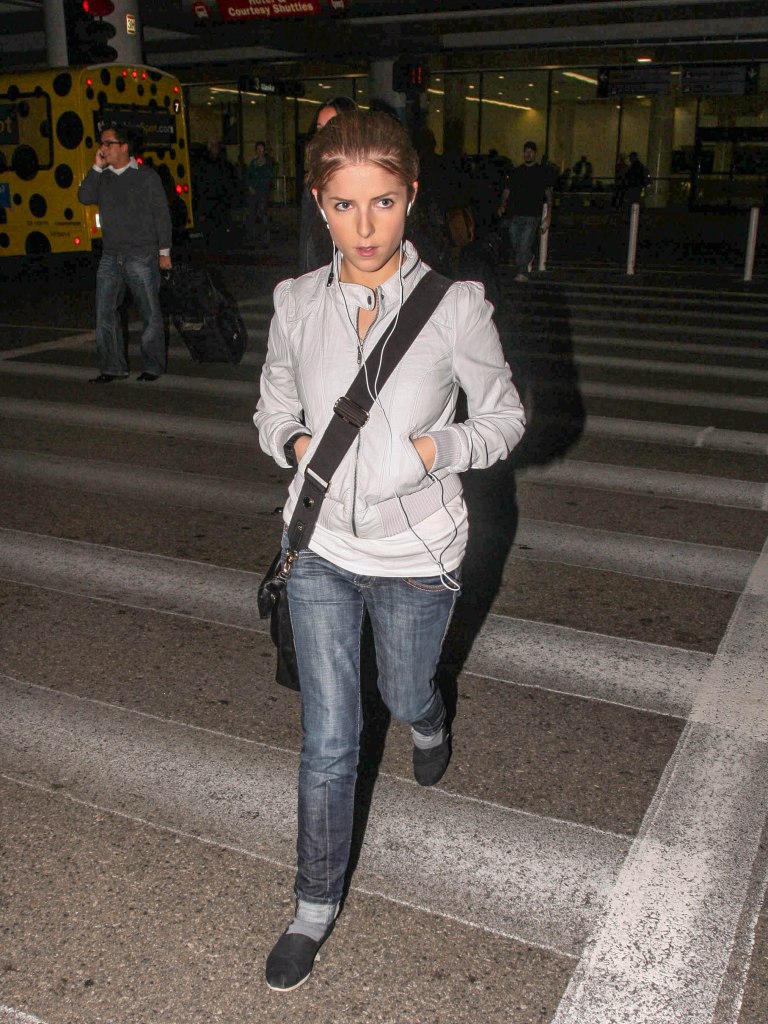 Don’t remember it at all either. 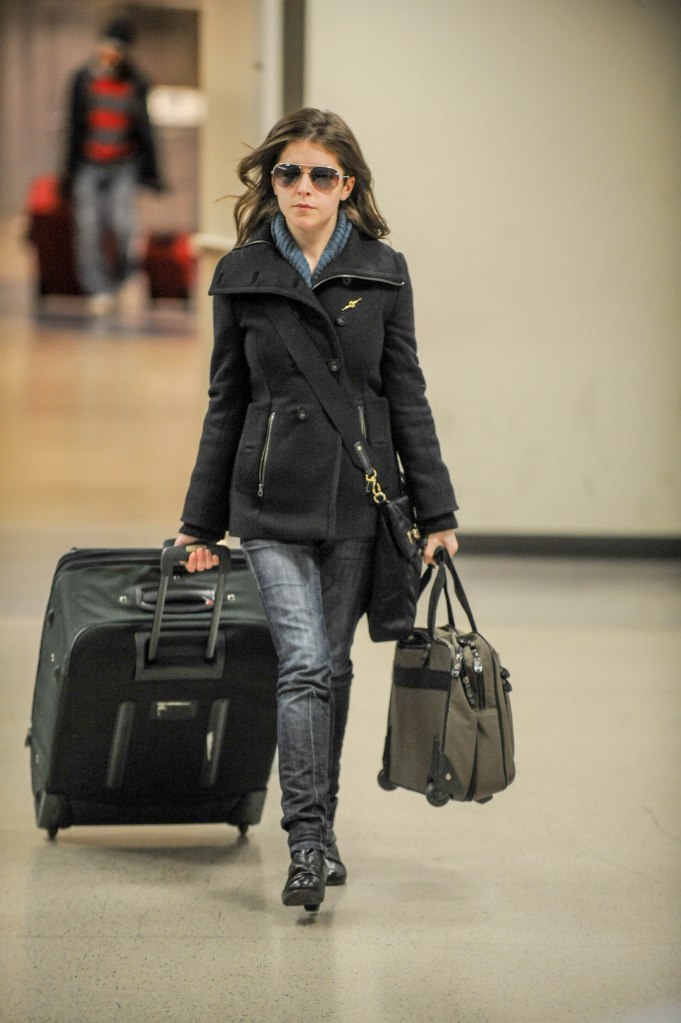 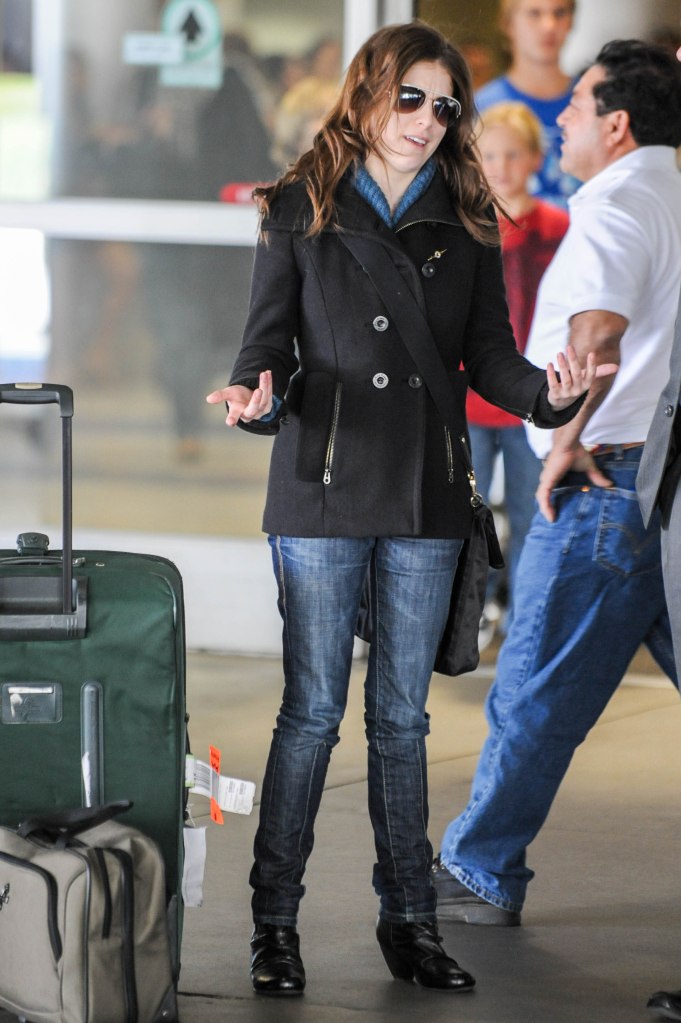 The many expressions of Anna Kendrick waiting for her limo to arrive.

That dude she was talking to is George. One of the other celebrity greeters. George was nice for the most part, but a show-off. I’m pretty sure he talked shit about me behind my back all the time. But every once in a while he would play cool and feed the celebrity to the camera.

I guess it depended on his client.

I haven’t paid rent. Roommate never came home. I have to do that, but I’m way too sore to walk across the border for cash. Hopefully, I can get one more day extension (which would be a nine-day extension). I have the money. I just don’t have the cash.

I’ll make my own.