Tj Violence and Trump’s America (Political Word Vomit) – VIP Tickets to Tacotopia for A Ride to Del Mar (All You Can Eat Tacos and Friends on TV) – Burger Research Continues (Mamut)!

Ever wake up and go straight to reading Trump’s tweets?

It’s not a good way to start the day.

I’ve done it constantly and then I try to ignore so I don’t word vomit about politics for hours. The US is really polarized in a fucked up manner.

Tijuana is fucked up too.

Yesterday, as I was writing about burgers, I couldn’t help myself but write another negative Tijuana story. It’s been over 1,000 murders this year since last week. At this pace, it will be 1,538 murders at the end of the year (four per day).

Robberies, assaults, all sorts of theft is way up as well.

There have been break-ins in the apartment.

The front neighbors got their bicycles stolen from their balcony. Monkey robbers. That building is not easy to climb, much less to take two bicycles from the balcony, and then climb down with them.

Or maybe they did it through the roof. Still, not that easy.

A friend posted that he rather move to Barrio Logan in San Diego because it’s safer.

I want to believe that.

But it’s only sort of safer.

I’m willing to bet it’s practically the same in regards to maybe getting shot. Theft might be less. It still occurs, but not in the way it occurs in Tijuana.

Apparently, criminals can just walk in any establishment and just rob the place and walk out.

During any time of day or night.

If they get arrested, they get out of overpopulated jails in less than a month.

And the cycle continues…

So let’s cross the border and be in Trump’s America.

At least it’s California. Is not really felt as much there. Everyone knows there is already a wall and the border is a bitch.

I still don’t get how hard is it for people to understand that the border is already there. And throwing money at making it bigger/stronger is not going to solve anything. It’s just going to make shit worse.

I remember a tour I had this summer… 8 adventurous guys older than 50 from the Midwest. The guy that hired me, pulled me aside and told me “those three are Trump supporters.”

I talked to them for so long.

They were all really nice. Only one of them seemed to be pissed at everything and didn’t seem to be enjoying the tour.

They requested to check out La Casa del Tunel. We met artist Enrique Chiu and he told us about the old tunnel that people used to smuggle themselves or drugs.

The Trump supporters were incredulous that there was already a wall.

They were also incredulous that you NEED a fucking VISA to cross to the United States if you are Mexican.

They literally thought that THERE WAS NO WALL at all. And that ANY MEXICAN could simply walk into the United States like nothing.

Like they show it in cartoons. A lonely border patrol in the middle of the desert and Mexicans running through the desert like fucking Speedy Gonzalez.

A friend is going to be on the news soon to talk about tacos. The same friend I mentioned a bit ago about moving north!

Going to check it out.

Yay! Two friends were on TV!

I didn’t know what it was going to be about… and it’s about Tacotopia at the Track by the San Diego Reader.

Alyssa was on Tv! She’s the event organizer who I help out with TJ vendors and other stuff.

And Tony Tee. Who is going to be at the event with his food truck Corazón de Torta.

I got excited for the event which is this Sunday. I was thinking about skipping it! Now I think the opposite.

I should definitely go. I have a couple of VIP tickets. If anyone can give me a ride, they get the extra ticket. I might be able to get more tickets too…

All the tacos you can eat in three hours!

And then… of course, a ride back.

I sort of need to go for work as well…

I’m going to be managing the stage the weekend after this one. It’s an easy gig, but might as well shadow my roommate while he does it at Tacotopia to just confirm that I know what I’ll be doing.

And speaking of tacos.

And speaking of tacos and what happens the week after that.

Burger research continued yesterday, though I’ve been having way too many burgers.

It got replaced by a regular burger and a BBQ pulled pork burger. I tried the pork one and it was pretty meh. Okay burger. Cheap and it’s Mamut so it’s okay.

It’s not what I wanted. I was already writing in my head about the 50/50 and just wanted to go confirm it was the same thing. So now I have to change it all up.

It ruined my plans.

My girlfriend had the portobello burger and she said they made it better than what it was before. Instead of mozzarella, they use goat cheese. So she was happy.

We chased the burgers down with a couple of pale ales. Then walked home before Jeopardy. Girlfriend was in bed early as usual.

The intro for that one is already written, I just need to try the burger.

They have oysters. So girlfriend should be happy with that. I’ll meet her over there after her work.

Bisho is acting weird and wants to go outside.

He still has that big scratch on the top of his head and some fleas.

I’m taking him to the vet this week.

I just need to finish with today.

Not even 10 am and I’m done with the word vomit. How about that!

This post needs a picture and a title. That shot of the TV will suffice.

Or how about Tacos?

This was Tacotopia last year:

Here’s a pretty picture of a taco. 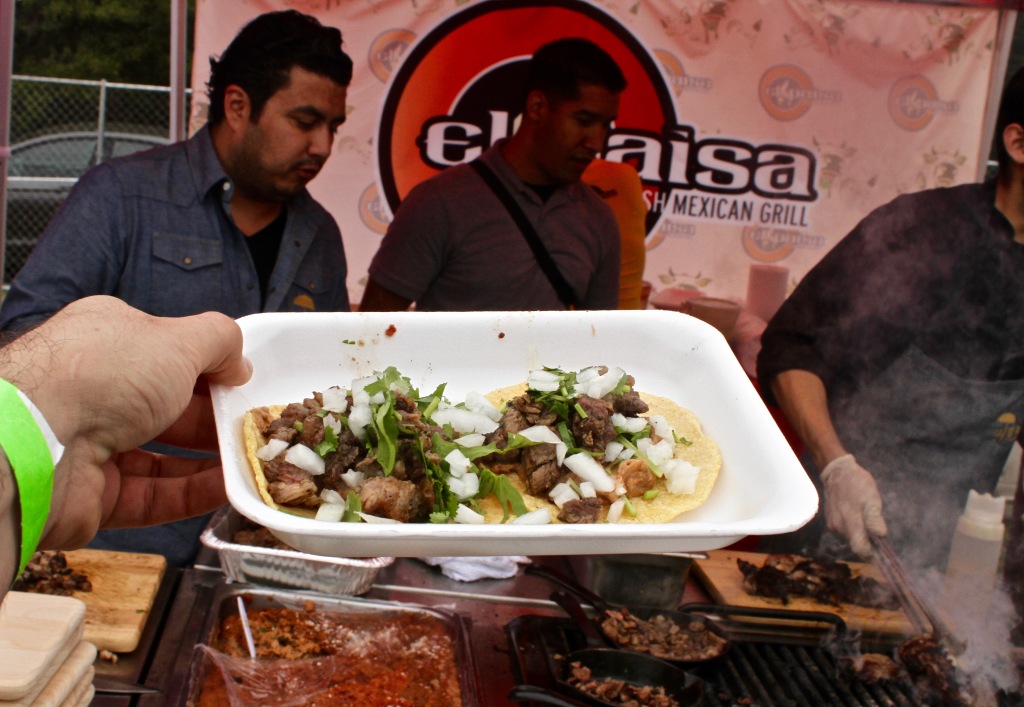 A friend already says she will give me a ride if I find her another ticket.

But we’ll see who wants to go! All the tacos you can eat VIP tickets this Sunday! WOO!