And yes. I skipped the blog yesterday for a good reason.

Right now, I wait for a journalist from NYC to call me to talk about a story she is looking to work on in late September. Let’s see what that is about.

I fucking hate the phone.

Alright. Emailed her and she said she will call me in a few minutes.

I haven’t had breakfast and I’m not sure what I want.

It’s between fish and shrimp tacos or making myself eggs and chorizo….

Yesterday, I left my apartment at 9:20 am barely caffeinated. I didn’t have time to word vomit. I had to cross the border and meet with a Canadian journalist.

Another journalist called me on Wednesday when I was having lunch with my brother at Las Cuatro Milpas.

It was an okay but really cheap lunch (for San Diego). I would definitely…

Alright. That was a 20-minute phone call with a stranger that lives in NYC but is from Tijuana and we are probably going to work on a project together about the border. The phone wasn’t as painful as I thought it was going to be.

I have to send this email that is fresh in my mind before moving on with the word vomit.

Fish tacos will do.

Let’s rewind back to Wednesday.

I had this for lunch with my brother:

That’s $5. Not bad in San Diego. The tortillas were so thick they were basically naans instead of tortillas… I didn’t finish the bowl. My brother got the same thing but without the chorizo + a taco.

While I was eating that, I got a phone call from a stranger. How a stranger got my number, I have no idea.

It was a journalist from Canada for the Globe and Mail, one of Canada’s most widely read paper! And they sent her to the California area to know more about what is going on with Trump and NAFTA.

So if she was reporting on the border, might as well cross the border and find out what is going on… right?

She has never been to Mexico and didn’t speak any Spanish. She was also posted on Reddit that she was going to hire someone. Instead, she hired me.

I picked her up real early for Tijuana standards. That’s why I couldn’t word vomit in the morning.

But hold on. I didn’t talk enough about my Wednesday…

I took pictures of a lawyer. That went smoothly. Basic. His office had nice light so there wasn’t need to do much. It was done in less than two minutes.

We crossed the border together because he had to pick-up something in Tijuana to head back. I only needed the car to go to a location and take pictures of a building. I should have done that on my way back to downtown San Diego, but I thought my brother was in a hurry.

We crossed back to San Diego around 4 pm, I borrowed the car, took pictures of the building, again, took me less than a minute, and I was on my way back to pick him up. But very early.

So as always, I waited at Karl Strauss while he gets off work.

And I didn’t know this.

Another cover came out with a picture I took on the Reader! 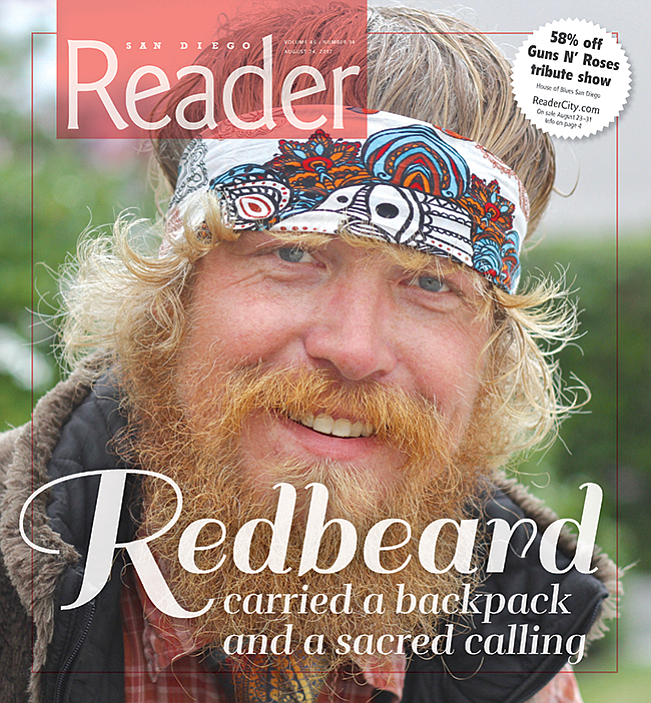 That was one of my first gigs for the photo thing on the Reader months ago. I had no idea it was going to be a cover. It’s nice. If I didn’t have that picture cover, it would have been the second week in a row where I had nothing on the Reader….

Too bad they paid me forever ago for those pictures.

The story is great too. I obviously met Mr. Redbeard. He was real cool. But then we started talking about Jesus. He was still cool… but meh.

Here are all the pics:

And CLICK HERE for the story by Jonah Valdez.

Next few weeks my work will be appearing on the Reader. Both pictures and text.

Speaking of which… I have a bunch of text to finish….

I bought beers on Wednesday because the girlfriend requested good craft beer. I got the Elysian Dayglow IPA. It’s pretty good, but I like their Space Dust better. There’s still one left in the fridge.

Just got a message for a bachelor party tour with 12 guys… TODAY!

I said my price, let’s see if they go for it. If they do. Great! I have a gig to fulfill that will pay me real good money but I also will be partying a lot for work and … well a lot of different shit.

That’s what I did yesterday. An impromptu Tijuana Adventure. Except it was with the Canadian journalist. And the adventure part wasn’t the focus of the travel, it was work.

We met early, I walked her around downtown, showed how Tijuana is SUPER slow during the mornings. Got some coffee. Got some great tacos varios at Tupidos. Then, because it was early and there wasn’t much to do, I took her to Playas de Tijuana because EVERYONE has to see that border wall extending to the ocean. It was just a thing to do.

So yep. We talked about journalism, stories, and what angles she could use.

After that, she had a meeting at 1 pm in Pasaje Gomez with Ollin Cali, an organization that defends workers’ rights in maquilas and more.

We heard the story of Mago, an activist that fights for workers and women’s rights who recently won the Hermila Galindo award.

That interview took around 3 hours of talking in Spanish, translating, asking questions, translating, and learning more. Fascinating stuff. But it went for a little bit too long.

After the long interview, she was done with work for the day. My girlfriend met up with us and we went to Norte Brewing Co for the views and the beers.

Then for more food at Teléfonica because that place is amazing.

A walk to Plaza Fiesta to explore a bit of the business district, and one more beer.

And back to the border.

The journalist parked her car at the mall… and they usually tow cars of people that crossed the border. She got lucky. Nothing happened.

I hope she had a great time and I believe she will be coming back for more.

And that was it.

That’s what kept me so busy on Thursday.

Back to the beginning of today…

And I’m even more conflicted now.

I have a possible bachelor party tour. It doesn’t feel like a Friday and I wanted to work on articles that I need to write. Xolos plays at home so there is a soccer game going on. Toros de Tijuana has the second game of the playoffs against Monterrey…. There is SO MUCH going on.

Go back to workout.