There is a foul smell coming in through my balcony windows.

My street in Tijuana is again filled with sewer water.

Tijuana is always a mess.

My website’s memory is 85% filled. So I’m either going to have to delete old posts/pictures or move shit around or pay extra money.

All I know is I’m hungry and I don’t know what to eat.

I went out with my girlfriend to eat. Tacos again. Oysters again.

This time with the trippy effect.

And without the trippy effect.

Girlfriend also got a salad.

I was still pretty hungover and I didn’t want to drink. We had cucumber/chia water instead that was okay. Girlfriend wanted to drink beer. I didn’t. I told her it was okay if she wanted and then I can see her at home.

This pissed her off.

We walked back home with no plans but to just be at home.

Tijuana was playing against Puebla.

It was a horribly boring match. At least the first half.

During halftime, we watched Hot Ones with Neil DeGrasse Tyson.

It’s a pretty good episode and Neil is pretty likable. But Reddit has ruined Neil for me. He just seems pompous now. In reality, he is likable and says stupid shit every once in a while and Reddit loves to hate him.

You can tell he really loves his food and knows about it. I wouldn’t mind more videos of Neil talking about food.

And then we fought for a while.

The game was boring and I didn’t care.

It’s more like we had a long discussion of our future and what not.

And feelings and shit.

Sometimes I have no idea what I did wrong.

She was still mad that I told her that she could go drink by herself.

In her mind, it’s me being a dick and telling her to fuck off.

In my mind is like “you can do whatever you want and it’s fine with me, I’ll still wait for you home.”

Then we argued over other shit. Mostly of our future which is coming at us really fast.

In one month, her friend Paola will be visiting for a weekend. It will be at the same time as Burger Fest, which I have to work at.

In the month after that, we will be in Oaxaca.

And a little bit after that. Who the fuck knows.

And this scares her.

And it scares me.

After much discussion, we came to the conclusion that after Oaxaca she is going straight to Monterrey.

And we will spend a bit over 2 months apart and reunite right before the end of the year.

Come back to Tijuana.

Continue with our lives.

Complete a year together.

Probably move from this apartment.

Most likely move from this apartment.

Try to get her VISA papers back.

And if not, maybe get married?

It seems so fast.

I already call her my wife every once in a while. But shit. To actually be married…

It’s a little bit too insane.

Sounds very adult like. And I’m still not that.

This is like the first real relationship I’ve ever had.

I guess I’m getting old.

A lot of the other fighting involved financial inequality, dreams that seem impossible, and a rocky future.

But I’m sure everyone has it like that. Or probably even worse.

Shit. I’ve seen several relationships on Facebook, the drama central, where the woman claims her boyfriend/husband attacked him, then the boyfriend/husband defend himself with a very long post, then more drama, and weeks later I see them together as if nothing happened.

We fight. But our relationship seems more stable than many others we can be compared too. Except probably my brother and his wife. I don’t know how they do it.

I didn’t have one drop of alcohol yesterday.

I didn’t crave it until late at night, but then I was too tired so why even bother.

I’m not craving it right now.

It’s nice to reaffirm that I am not an alcoholic. I’m just a heavy drinker.

CAN YOU TELL THE DIFFERENCE?!

It’s Saturday. A true Saturday for my girlfriend.

I feel the pressure to work but not the inspiration to do so. The office seems a mess as editors get shuffled around and there is some editor drama that involves my distant roommate and the food editor. And the editor had the inclination to name drop me.

That’s more than most people can do.

And he butchered my articles.

I’m obviously on my roommate’s side in this battle. I have no idea how the magazine feels about it. I have five food articles in my mind that I really want to write but I do not want to work with that editor.

He had more time to complain about things than to actually edit.

And he sent long email chains with one sentence or only one question for him to keep reading the article and figuring out that his question was resolved.

He is probably a nice guy. I never met him. But through email interactions, he comes off like a condescending fuck douche.

My mint plant in the balcony is looking extremely happy.

I need someone to take care of Bisho and my plants while I’m gone in Oaxaca.

Basel has to be plucked every day or else the fucker grows flowers and dies.

Mint is just happy but takes a lot of water. Watering it almost daily and fucker soil is dry already.

This post needs a picture, so I’m going to take one of that fucker because I’m happy it’s actually growing.

For a while, it was completely dead that I cut everything and started from absolute zero. So it’s really nice to see that it’s actually alive and doing well.

Look at how happy this fucker is. 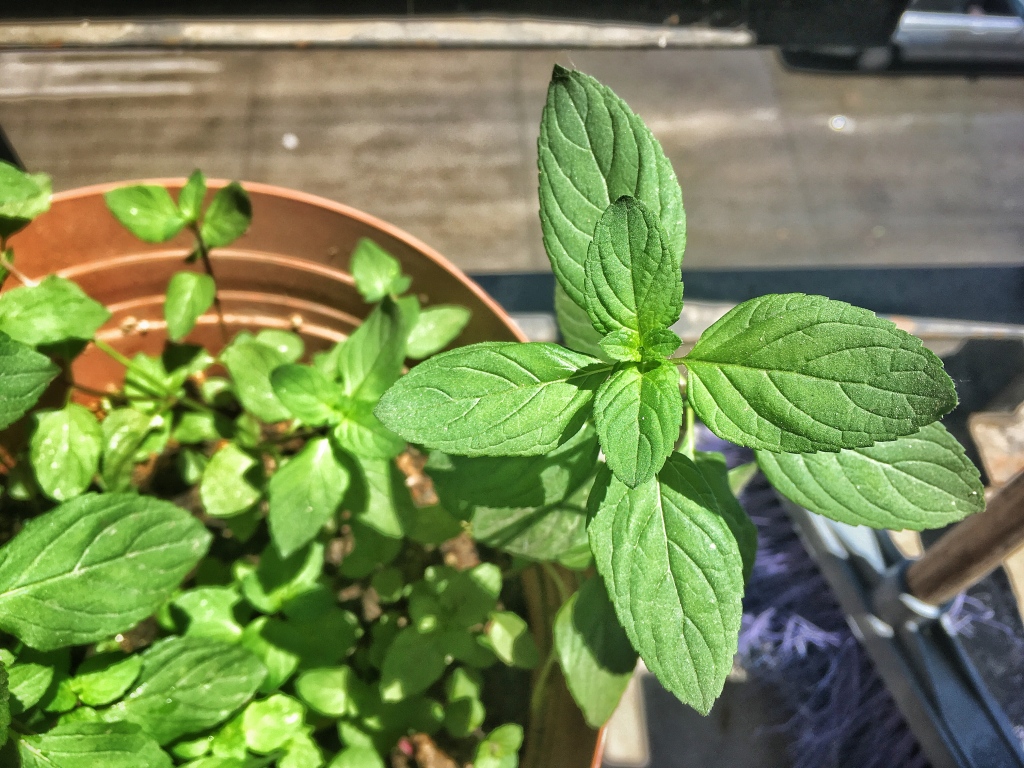 It’s not the best picture. Whatever.

Who would pay a dollar to support my word vomit, my pictures, and my music work?!

Over edits pictures, likes to word vomit, every once in a while I pick up my guitar and noodle.

Many people are doing it. So fuck it. Why shouldn’t I?!

Maybe it will be a real blow to my ego to find out that for months no one would even give me a $1.

I’m going to start working on setting it up after I hit publish on this.

I didn’t workout at all yesterday because hungover. I already did half my routine today. Don’t want to do the rest. But I have too.

Just like I have to continue to word vomit.