And I’m doing absolutely nothing as if it was my Saturday.

It sort of is.

I am done taking tons of pictures of food. And oddly enough, I sort of got burnt out.

It’s an awesome gig, don’t get me wrong. They serve me food. I take pictures. Then I get to try it and take it home. For the most part…

I am taking it easy today.

I feel like I’ve done a great job and that I can relax. I’m also going to ask for a bit extra money for this one. Over 800 pictures of food edited down to 200, so one of them can be the cover and several more can be on the inside. I think that deserves a little bit more money than the usual… Right?  I mean, besides the free food…

There’s still a bunch of free fancy food in the fridge.

Yesterday I destroyed some of it. The meat parts.

A piece of fried chicken, a small piece of different breaded chicken, two huge things of pork adobada, and the fancy rib-eye cuts with couscous.

The rib-eye cuts were the best.

I was going to give the chicken second place because the first part of the pork adobada was just okay. But when I had the second part. That second part was great. It had more of a spicy kick to it. So that gets second place.

THEY WERE ALL FUCKING DELICIOUS.

The chicken is probably the only thing I can actually afford. So I’ll probably have that again. The rest… probably never again.

I chased it all down with a couple of Stone IPAs. The Stone Tangerine Express and the Ghost Hammer to be precise. It’s Stone. They were obviously fucking delicious.

This morning has been nothing but coffee, Reddit, and emailing.

And looking at the pictures I took. Over and over. I’m proud. And they can still be way better (if I had better gear).

So many great pictures of food.

Too bad they will only use like one or two from each place. I’ll email the leftovers to the managers that gave me their card. Maybe they’ll use them for their own social media/advertisement. And maybe I’ll get more freelance photographer gigs.

Sometimes I want to change a lot of what is going with the magazine.

But then I remember I’m just a freelance writer/photographer for them.

Today is my Saturday because I have a gig on Sunday.

The magazine gave me yet another gig for Sunday morning that might become a regular thing.

After posting my late night word vomit yesterday morning, I crossed the border with plenty of time. Got to my brother’s place of work. Got the car. Stopped by the office again to deliver some posters my brother had in the car. And headed to Cafe 21 for my meeting with the owner at noon.

I explained more of what I was doing and told them the plates that the writer mentioned. I sat down outside for the better lighting and they started bringing tons of plates with drinks. Tons and tons and tons. And tons.

And I was super fucking hungry.

But I took pictures for nearly an hour before I disturbed the food.

Finally. After I was satisfied… I dug in.

Exactly what I fucking wanted and I didn’t even know it. A large pan that seemed to only have a bunch of tomatoes and sauce, was actually superb fried eggs with cream and more.

Talking about it made me hungry.

And I still have some leftover from yesterday.

That’s going to be my breakfast.

And I still have a chicken hamburger with bacon, cheese, and a fried egg.

After Cafe 21, I had to hit up another place. A place I didn’t even bother to call. I thought “hey, it will be early and they won’t have a problem.”

They weren’t thrilled about my arrival.  I apologized for showing up unannounced and told him I was going down the list of restaurants.

The manager told me to come back later at night time (and I told him there would be no good light then). And then he was like “okay, wait 15 minutes.”

And he brought the pizza I told him the writer talked about.

Then brought the other thing. And I told him a cocktail would be nice for the picture, so they prepared one (with alcohol, which was obviously not necessary).

When I told him I was done he was like, “grabbing this and putting them back in the kitchen.”

Saw him once again and he noticed that I was taking a sip of the drink. And he said something along the lines of “sure, have that drink if you want.” And then disappeared. I took one more sip just to try it and left it. The bartender threw it away as soon as I walked away. I used the bathroom, thanked him again, and left.

The whole experience gave me a bad vibe.

I mean… what the fuck dude? You got mad at me for doing my job? For basically, doing you a favor?

I went to Lefty’s Pizzeria after that. They were thrilled to have me there. And after taking some decent pictures… the dude in the pizzeria realized we knew each other from four years ago.

Never heard of them. Giving them a listen right now.

I took some pictures of the pizza and pizzeria. Marco offered me a slice or two. I wasn’t hungry. I was going to ask him to give me one to go. But after my previous experience, I thought I shouldn’t abuse the “I’m here to take pictures, give me free food” attitude. It’s not like I do it with that intent. But I mean, why not?

I humbly rejected the slice and headed to the next place.

I also called a different Pho place to see if I could go take pictures. They didn’t seem to speak English and hung up.

Paris Bakery was up next. Small place in a strip mall that is all Vietnamese and disorganized and awesome. Despite the messy look, they had great pictures on TVs above the counter.

The writer mentioned a banh mi from there. I told the nice Vietnamese lady what I was doing. She was fucking awesome. She set it all up. I asked her to decorate with a drink and she grabbed one Vietnamese weird thing. And also grabbed a sweet roll.

Took pictures until satisfied. And then she hurried up and rolled the banh mi and went like “this is your lunch! Enjoy enjoy!” She also gave me that weird drink. Which I really wanted to try.

It had three layers. Milk, soybeans, actual beans, and something else. The first sip I was fine with. It was just sugar milk. But then it had some weird jelly worm gummies that were flavorless. And after that, regular beans. Like the beans I’m used to in my tacos. It was weird as fuck. I didn’t like it.

The banh mi. That was fucking delicious.

The Vietnamese lady told me they had great pictures because her cousin in Los Angeles works as a manager of social media and he did it all. She also told me that the place has been covered by Thrillist and other magazines. She was excited!

The other place I called on the phone that didn’t speak English was just a few blocks away. So I decided to show up. Nope. They don’t speak any English. I explained what I was doing and the waited was just really confused.

I asked for a manager.

No manager until 8 pm. Come back.

No pictures I guess.

I was tired already.

Went to Brozo’s house to kill an hour before picking up my brother. Brought him some of the food because Brozo is awesome and he deserves extra food.

We jammed out for a while and wrote a sweet riff. Brozo has been working hard on his music and I’m fucking jealous. He is fucking good. Like surprisingly fucking good.

And I should do a little bit of a workout and shower. Girlfriend gets off work soon and I’m doing absolutely nothing.

I finally got up not super early in the morning. I moved from bed to couch, couch to bed, only once. And slept till 9:30 am. It is now 12:45 pm. And I plan to keep doing nothing today.

I’m done with the day.

Saturday I’ll do some light work. Sunday I have another gig.

This is a picture with no relation to all the food. 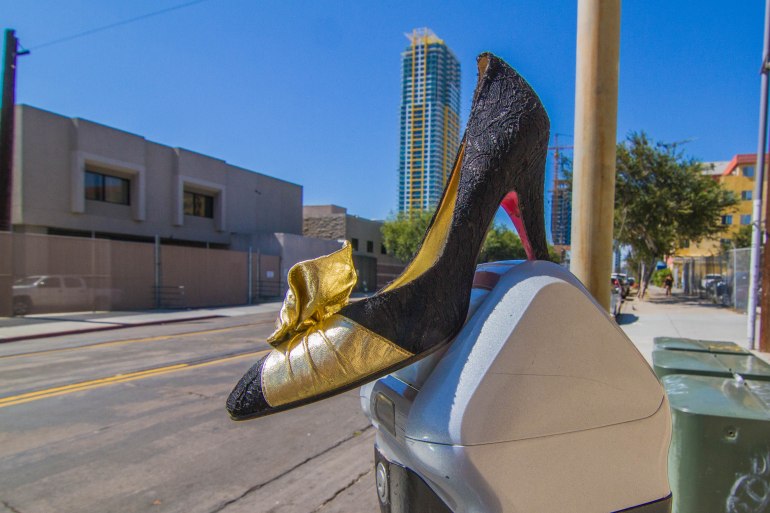 That was the meter I parked at to go to Brozo’s apartment (a block away).

Random shoe, setup just like that on the meter.

Why not take a picture?

When I went back to my car, the shoe was gone. It would have been better because it was golden hour then. But no shoe.

The pictures of food will have to wait two more weeks. A day after my girlfriend’s birthday. And I’ll post them everywhere.

Now it’s time to heat up some leftovers and eat more fancy amazing food. Girlfriend ate a bunch of the food I brought yesterday immediately. If I still have this gig by next year, awesome. It’s a really cool gig and I can get better at it.

That it hasn’t bothered me for me to change it and go back to math rock means I like them. It’s simple. It’s fun. I will watch them live and enjoy it.

Not really my music though.