Yep. I skipped yesterday! I have guests! And I had to entertain!

Guests are still here. One snoozes on the couch, the other in my roommate’s bedroom (sorry roommie).

They are on their way to California to do a seasonal job. A job that I want to do. You can make a few thousand dollars in a month or two. It’s hard labor, but I know how to do it and I want to do it. I have a lot of friends that do this seasonal job and I’ve been meaning to do it for a couple years now. And now I have another contact for it.

And then, if I go to do this seasonal job, this daily word vomit will desist.

Speaking of money. Holy shit have I been spending all my money. And not been working at all. I mean, besides emailing and interviewing people and taking pictures. I guess that’s work. But that’s not enough.

I need to write and do more tours.

Tijuana Adventure’s Instagram is way more active now. I post a lot of food and drinks and food and drinks. I might need to sponsor a post soon. A slideshow. But I want to offer a tour to go with it.

Aguachile and beer from Alga Bien:

Drinking with the aforementioned friends at Alga Bien.

I’ll never get tired of this spicy tuna tostada from Otto’s Grill.

And of course… fucking oysters.

We hunt for those so often… Again, from Otto’s Grill.

And this was around 1 am at La Estrella when I went to the bathroom and found this gem.

Let’s rewind to Saturday, which was a great day and I wanted to blog about it but it extended to Sunday and now today.

I had a great interview with one of the most important brokers in Tijuana. It’s a long ass interview that I have to transcribe this week. I’m going to start doing that as soon as I finish this blog. It’s almost an hour long, but I gathered the exact material I needed for the cover I have in mind.

And I still have to work on all the other shit I didn’t do.

But I’m running out of money, so YES now I am inspired to do some work now.

After the great interview, I met up with my girlfriend.

But about that interview still… I went to the newest buildings in downtown and I was blown away. The renovations are fantastic. They are still cheap. And there are many more buildings to come.

Met up with the girlfriend. Came back home. I was tired, but the Reddit meet was about to happen.

We had lunch at the Korean place in Plaza Friki. She was super skeptical about the place, but fucking loved it! She got a plate of rice and a side of kimchi for like $2… I got the kimchi gimbap for $5. She loved both. I’ve always liked it.

We also got this weird rice cracker snacks directly from Korea.

We got there just in time.

Only one person was there…

He is a cool guy who said he was going to bring a date, he didn’t get a date. 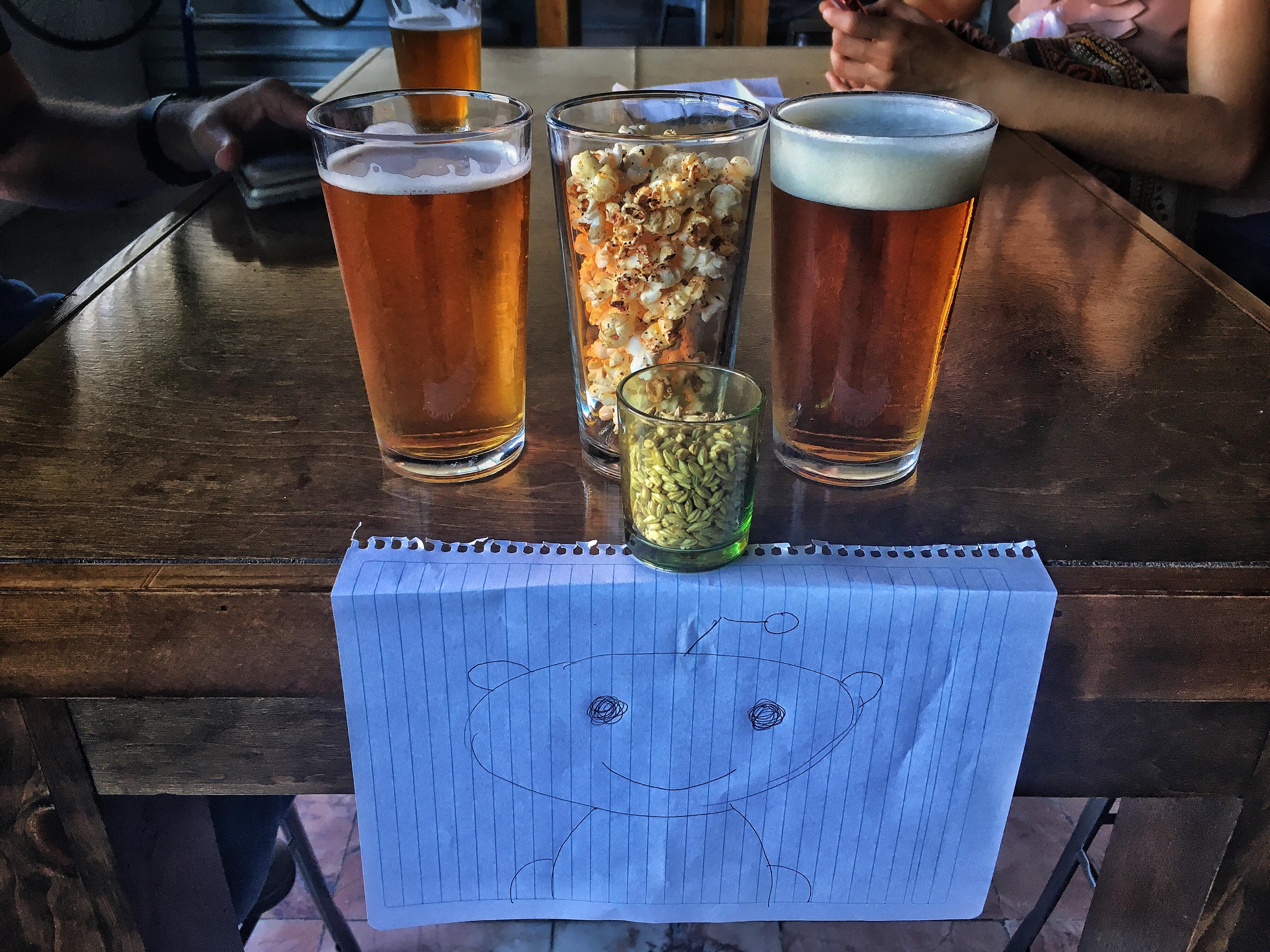 Then two other people showed up. A married couple of really funny guys.

And then… my friends from Querétaro showed up. So it was that group. Not really all redditors, but at least it was a group.

We drank, we ate, we did merry.

It was a long night.

Started at Santuario Brewing. Couple of beers there waiting to see if more people would show up. No one did.

So from there, we went to Norte Brewing Co. First, we got some pizza at Volo.

And yep. Norte. I had guests so I had to show them around. The Redditors joined in because yeah!

From Norte, we went to Mamut for more beers, more pizza, and more food.

The Redditors disbanded after this. I had a free Tijuana Adventure to attend because childhood friends.

Seriously. I haven’t seen Daniela in over 8 years. It was a trip to hang out with her. Remember the neighborhood. The other people I used to hang out. We mentioned her cousins (Los Milla), guys that I haven’t known anything about in years and we used to hang out so much. My childhood’s friend mom still lives in the same fucking house. I had a dream about that house. I spent so many days of my life in that house. I want to visit that house. I could fucking draw the whole house by memory at any time. I fucking love that house. I love it as much as I loved my childhood home. So many fucking memories.

The trip to memory lane was deep.

Girls were hating the bar. So to the next one.

Zacaz Bar. Where my girlfriend and I kiss for the first time though she denies it because it’s a shitty seedy bar.

This was more up to their speed. They liked it, but my girlfriend wasn’t liking it much either. She wanted to dance.

You know how I know I love her?

BECAUSE SHE FUCKING MADE ME DANCE.

I didn’t want to dance.

But I love her. And I have so much fun dancing with her.

Yep. We went to La Estrella Salon de Baile to dance some cumbias and what not (drink more beer). The DJ fucked it up when he started playing some shitty techno music.

That’s where I saw the sign for a CHAT of tequila.

We got home at 1:50 am (according to the Uber ride). AHHH UBER. If it wasn’t for you, I would have no idea what time we got home.

The city was still going full blast when we were exiting La Estrella. I mean, La Estrella was already fucking packed. But we were tired.

Got home. Watched Youtube videos, drank the two beers that were in the fridge, talked about all the childhood memories and what not… and went to bed at around 3 am (girlfriend passed out before that).

My friends were supposed to leave yesterday afternoon.

They didn’t. They are waiting for someone else who is joining them in their California adventure. She was delayed by a day.

So that’s why I was busy all of Sunday as well.

Sunday we started with breakfast/brunch at Teléfonica.

CUE THE TOSTADA I ALREADY POSTED.

I posted the pictures already and now I’m telling you how it went down.

Teléfonica like always was fucking fantastic. I was hungover, but we got micheladas and I couldn’t resist. Beer actually made me feel better.

After that, we went to the cat cafe. No pictures. Just story videos on the Instagrams.

From Cat Cafe, we went to check on their car. It was fine.

We got in their hippy van and drove to Playas.

I haven’t posted a picture of the hippy van. It’s pretty fucking awesome. Daniela pretty much lives in it.

Girlfriend on the side, Daniel and Daniela on the other (yep, I was hanging out with people that both respond to “Dani,” and they are cousins…)

Playas was fucking packed because Father’s Day and SUNDAY. Like holy shit. I’ve never seen Playas that packed in my life. I hate crowds of people.

But we managed to find a table at Alga Bien. Which was stupid busy, but not as busy as some other shitty places that had lines out the door.

It took forever to get a waiter’s attention, but finally. We got a bucket of beers, aguachile, and a cream of corn and shrimp in a bread bowl.

Enjoyed the beach for some more. Girlfriend bought a small cactus.

Headed back home in the early afternoon.

We were all pretty much pooped from Saturday and the Sunday beach. So instead of going out, we decided Risk! It was Daniel who saw it on the table and said oh shit! We should play!

It was a stalemate sort of game for the longest time. My girlfriend and Daniela fought each other over Europe (which is a poor strategy) and Daniel and I fought for South America, Africa, and Australia. We both controlled those continents at some point. North America and Asia were left alone for the most part.

After that, Daniel had a huge upper hand. He eliminated my girlfriend and started dominating the board. I conceded.

Game over man. Game over.

I’m obviously taking them to the camarón enchilados.

Here’s a random picture of Billy Crystal from October 14, 2010. Don’t even remember this shoot. He seemed like he was a nice guy.

Not edited. Not nothing.

Just fucking Billy Crystal walking through the airport and I had that super nice D3 with the 70-200mm/2.8f and I used to make money.

It’s not that hard to make money.

I need to make money.