I had weird dreams. So I woke up feeling weird.

I have one photo mission that I’m sort of nervous about, though nothing happens if I don’t get it.

Grunion run. There’s an upcoming cover story about it.

Grunions are small fish that come to shore at midnight to reproduce on a new moon or a full moon. That means this weekend and in between the 24th and 27th. Again. If I don’t get a picture, they just get a picture from somewhere else. But I want to get the picture.

And I’m nervous about it.

Which stays in my mind.

And I attribute my weird dreams to that.

Because they were related to grunions and the beach.

Here’s the thing. They appear in both Baja and California. Doing it at home sounds easy enough. But it’s at around midnight. I don’t want my shit to get jacked. And Playas can get weird after night. So going somewhere else to do it would be fun.

Or I could do it in San Diego. In IB or PB or one of those other Bs. But then I would have to be in San Diego really late at night by myself waiting for some fish that may or may not appear.

It makes me nervous.

At the same time, it makes it fun.

So after all those weird dreams, I woke up not feeling like doing anything. I didn’t want to get out of bed.

But Bisho was hungry.

Yesterday was fun. I think I write that way too often. But it was.

I got a red star at Nelson!

Those fuckers are really rare. I think this one was my sixth one.

It’s like winning the lottery. Except you just win another beer.

We started at Buda Burgers because I wanted a burger, forgetting that I had burgers at In N Out two days before that. I eat a lot of burgers.

And I emailed someone this morning about burger fest.

Anyway. Buda Burgers was good. The old racist Gringo with the weird eye that was always there is gone. Buda is still being Buda. He likes to talk a lot.

His burgers are good though. Very big and quality for the price. With tons of butter (which is weird). And the brewery is also good. He has no IPAs and doesn’t plan to have any. Mostly sweet beers (oatmeal chocolate stout, cherry brown ale, vanilla porter…) none of those for me. But they also have a Kolsch. That was very nice and drinkable like a Kolsch should be. But with a tinge of sweetness that didn’t favor it.

And he has a sauce very similar to In N Out.

The light is not that good and I didn’t take my camera. Still. Picture up on the Tijuana Adventure IG. I need to push that IG more.

Buda Burgers and Cerveceria Mutualismo are hidden in Zona Norte. I don’t recommend anyone that’s not familiar with the city go looking for them. That place is TOUGH to find. But worth it if you do find it.

Photographer friend was looking for another photographer. It’s to shoot a baptism in Valle. I haven’t really done that. I sent him my price.

I don’t know if he is going to go for it.

And if he does. Then I’ll be nervous about delivery pics of baptism.

He said it sounds great. So I might be shooting a baptism in August.

Lightroom pooped on me this morning and stopped working. Trial version gone. Or the thing that I magically did to make it work for a while. Well. Now it’s not working anymore.

I spent most of the morning trying to fix it.

I can not not have Lightroom anymore. Not not.

My girlfriend didn’t like the environment in Buda Burgers, but the NBA finals were playing and she likes watching games with me for some reason. So we stayed for one more beer and then headed to Nelson.

On my way to Nelson I bumped onto a bunch of people. Wednesday afternoon felt like Friday afternoon. And right before Nelson… Danger Dave and his girlfriend heading into Nelson.

Our outing suddenly seemed like a double date at Nelson.

It was fun to catch up and drink caguamas.

And watch the game there.

When I ordered the second caguama… I saw it coming out of the register. The elusive fucking red star. 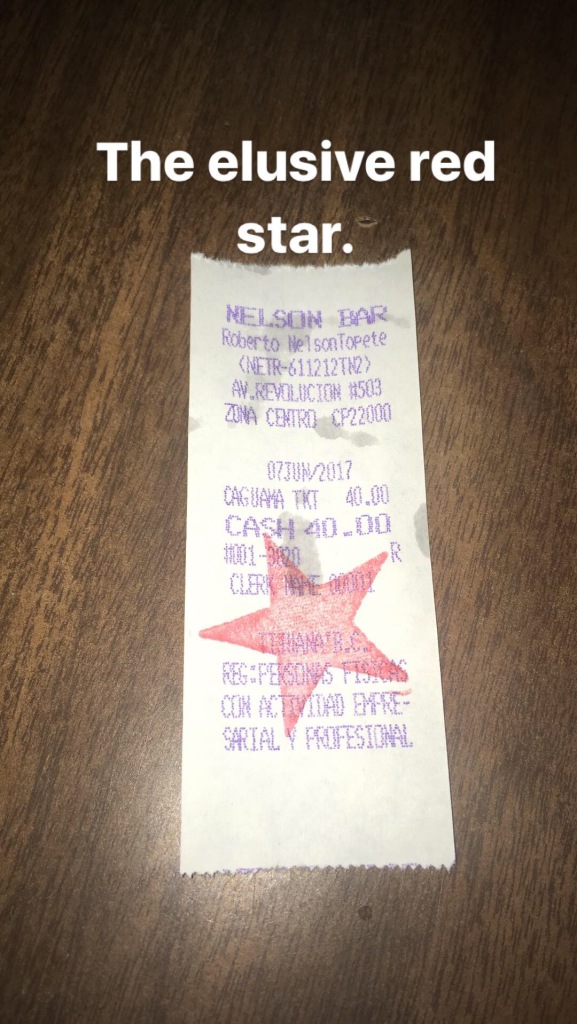 Instagram story cap. Those fuckers disappear after 24 hours and I like using them. And it made Snapchat forgettable. Oh, 2017. You strange. And there’s all the Comey/Trump shit going on right now.

A reason to celebrate. The red star. Not the Comey/Trump bullshit that goes on. 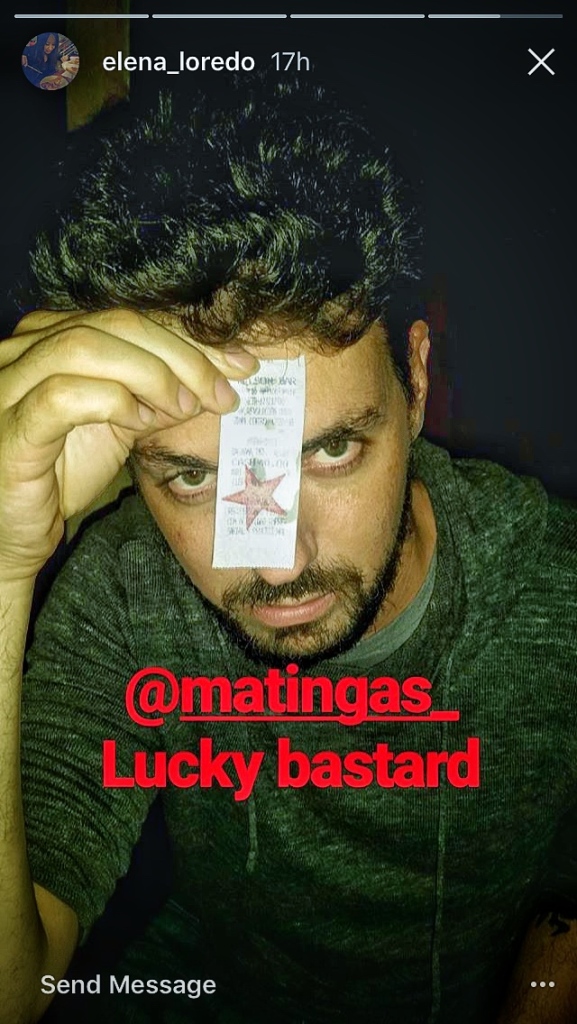 Before all that fun times… I finished the job that I needed to finish!

99% finished yesterday. Sent the email this morning. So that counts as the other 1% and done.

Deleted that shit from my whiteboard.

And there are many other missions to do.

I have a few emails to send. I already sent some this morning.

Having a whiteboard helps so much. But it’s also so very scary. Adulting. It’s hard yo.

I only have shitty coffee left. I went to Oxxo to buy some. It is a noticeable downgrade. Fuck I’m delicate.

Can’t live without coffee though. But I should go buy nice whole bean local roasted coffee soon. Because I’m a hipster.

And upcoming bills to pay. Internet was supposed to be paid yesterday. But Telnor is nice, they don’t really cut it unless you don’t pay it for more than a week.

Rent is due soon. No idea if the roommate is coming home or not. Downloaded Venmo in case I need to shift money through there.

Shit. I just tried to create an account and it doesn’t work. Venmo doesn’t work outside the US.

Doesn’t feel like Thursday. I’m still not used my girlfriend’s new schedule. She gets off work soon and I’m not even remotely done with mine. Haven’t even start it. Nothing is forced work, but just freelance shit I should be taking care off.

Haven’t even done push-ups today. And no. I’m not going to shower today. Fuck it.