My girlfriend is at a job interview right now. It’s freaking far. And it doesn’t look like it would pay much. So maybe it wasn’t even worth it. We’ll see how it goes. If it pays good enough, it might be a better choice.

But she’s excited for the other job that she most likely already got. The only weird thing is the hours. She will have to work from 5 am to 1 pm. And I don’t want her walking around downtown Tijuana at 4:30 am to catch the taxi….

She is thinking about commuting by bicycle to work on the daily. She’s not afraid of the nighttime commute, but more about on her way back because TRAFFIC.

As of now. No job for her. So we’ll still have to figure that shit out. She should work in a kitchen somewhere cool because she’s really good at it. And she is very clean and organized and all of that.

I woke up early but said fuck it, I’m still tired and I forced myself to sleep. She woke up early as well, but instead of doing nothing like my lazy ass, she started cooking and cleaning up the house. And I’m glad I took those extra hours of sleep. I’ve been feeling extra tired the past days, and I finally feel fully recharged…

She basically cooked breakfast for the following week and more. Tortitas de huevo y vegetales. Some sort of flat vegetable omelet. I prepared some for myself a while ago. Made a sandwich out of it and poured some of her salsa and beans. Fucking delicious.

I feel weird because I’m done with my photo missions. I have only one for sure task on the writing missions. The rest just loom over me like “hey, you should work,” but I feel stuck.

The payment for this blog is coming up. I keep getting emails that the blog is about to expire. So maybe I should take care of that now. It’s $18 for the whole year.

There. I have this blog for one more year.

Speaking of money. I’m running out….

Having a girlfriend is expensive yo. Or is more my fault that I want to do shit with her and we are always eating out and drinking out and playing pool and bowling and more drinking and eating….

It’s okay though… We just have to eat at home more. And not drink as much.

Also. I should get paid this Friday or after the weekend. It’s going to be a bit over my usual pay because I worked on my birthday weekend that wasn’t my birthday weekend. And I had other shit taken care off. And I didn’t get paid as much as I should have two weeks ago. Let’s see what happens. Payment surprise. Like always.

It’s still on “processing payment…” And they claim to have fascinating terms and conditions… Oh! WordPress. You silly. Thanks for hosting my word vomit for $18 a year.

If you want to contribute to keeping my word vomit around… YOU CAN’T! Because I don’t have Patreon or a Kickstarter or anything like that to support this stupid shit. I mean.. maybe you can. Just send me money. Venmo?

Hah. No one would pay for this shit. I still enjoy it. And the random visitors from over the world.

Still… processing payment… at around 95%

Yes. All over the world finds my blog and reads silly shit! It’s mostly them googling celebrities and finding this shit.

Today there’s been visitors from Georgia and China. I usually get a few Japanese visitors because my AMA got translated to Japanese. There’s always one view from Romania. And there are a few random ones.

United States and Mexico are who clicks the most. And well duh. That’s where I live.

Oh yeah. Last Sunday I got hit up by an editor of a local website. The owner wants me to write one of my silly articles for them. About how great it is to be a Gringo living in Tijuana. I’m guessing similar to my Border Crosser cover story. That they are willing to pay.

I’m thinking about it. But at the same time, I’m like…. meh… all I want to do is take photos.

This week has no photo missions :(

All I want is photo missions.

I have tons of writing missions and no desire to those… but with the lack of other missions and the need for money… THEN WRITING IT IS.

Just sent a message to an artist to see if I can interview him this week. He has a cool project. And I want to cover it. And obviously, take great pictures.

Fuck am I stuck with wanting to take pictures for work instead of anything else. I should start my next cover story. I pitched two forever ago. One that I really like. This week I should write three Tijuana articles. Haven’t sent much in the past month. Only that one travel story. It’s silly that word vomit makes me feel like I worked though this means nothing.

Whoa. Still processing payment… it’s already at 100% but it says that…

I should have waited until June 12th (when the domain expired). I paid today and it says that it will renew on May 22, 2018. Fuckers stole 20 days from my calendar…

And WordPress is also running out of memory space to host all my bullshit… !!

Back to watching silly videos about video game history.

Seriously. One of my favorite youtube channels is this dude:

I’ve been looking at cheap cars with my girlfriend on craigslist. Nothing too convincing, but again, so many options that I have no idea what to do.

And the driving for Uber still seems like a possibility. But I’m afraid I already do too much and nothing at all at the same time. Photo missions are great. I make so many contacts. I really need to make business cards.

I should write that down on my whiteboard because I keep forgetting about doing business cards.

There. It’s written on there BIGLY. And the writing thing that I can’t ignore. And a lot of other shit, but no photo missions.

The other shit on the board:

Zigtebra, August 5-6th (friends from Chicago coming to visit and play a show).

More recent ones. Delta Sleep, June 2nd. I might want to interview them and take pictures.

The day after that, InKoPah. And might as well take pictures. Was going to get paid, but I rejected the contract. Free ticket and pictures it is.

Yowie with INUS on July 24th in San Diego. Chon and Covet at some point as well…

^^^^^ Those are events/concerts that I plan to go in the following months.

Need to get new strings for my guitar.

It was Correos de México. A packaged arrived for my girlfriend. I ran downstairs to pick it up.

It was the shower curtain she bought me forever ago that was coming from China, then Correos de México said it got stolen… and now it finally arrived.

She seriously bought that over three months ago.

We needed a new shower curtain.

Pictures, then hanging it. This is what it looks like. 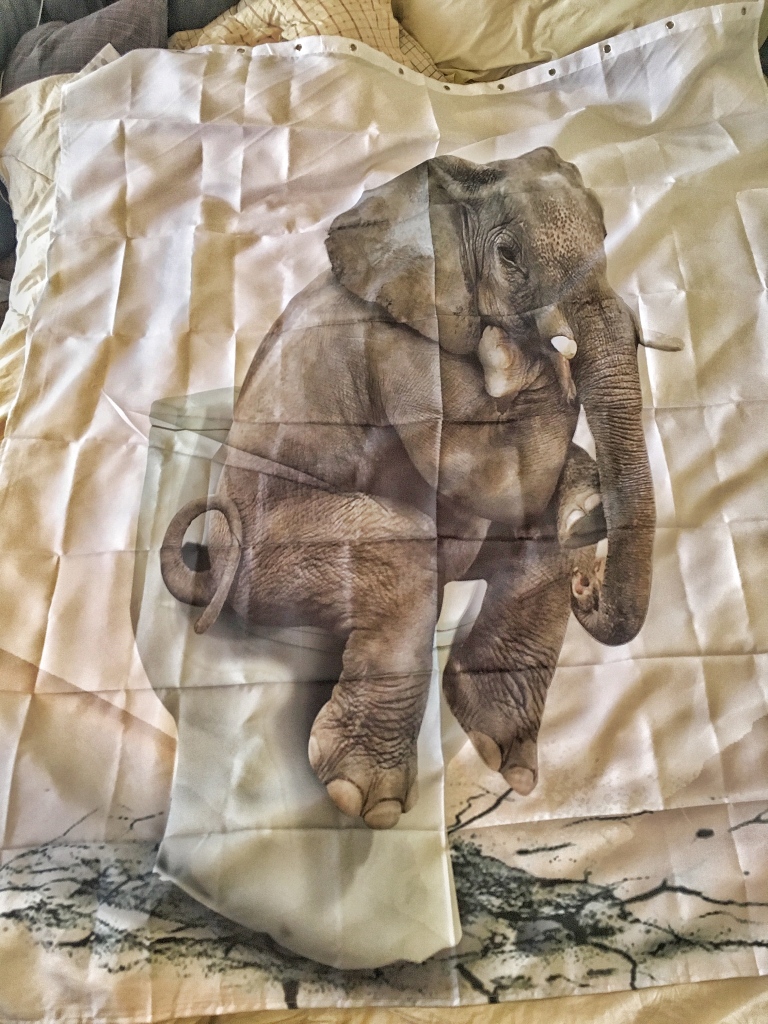 Yep. She regretted it immediately after buying it. We shopped online for new curtains forever. I told her that one was one of my favorite ones (I preferred an octopus one). I had a top 5. She had a different top 5. After looking at curtains for hours, she just said, fuck it, that one. Without really fully realizing that it was an elephant sitting on the toilet. She thought it was an elephant just thinking…

Bonus pic. Bisho on it.

Shitty iPhone pictures because I wanna.

Going to hang this shit up there. Start a business card thing. Fuck around with Lightroom with sky pictures I did before. Buy some shit on amazon. And get my week actually started.