The number of visitors on my blog are down. It’s not like I care much. I will continue to word vomit until something makes me stop.

I wonder when that will be.

I’m trying to reach the end of the year word vomiting daily and then see how I feel (it’s been less than a dozen skips). I’m close to my 300th post (this one will be 297).

That’s a lot of shit posting.

Yesterday was fun. The gig is fun. I just go places and tell them I’m a photographer and then I take their pictures. I feel a tad weird about it. But at the same time, it’s awesome. I continue to second guess all my shots. Took 150, reduced it to 48. I hope this is enough for what the magazine needs. I might have to take more pictures.

I would post pictures, but won’t until the article comes out. There was a long exposure I liked from a bar. And a couple of other shots. But hey. Getting paid for it. Hope it’s good enough. And my picture will again be a cover. And so on. And so on. And so on. I’ll get used to it.

It somewhat makes no sense that I get paid a fixed amount no matter the importance of the shot. A cover shot should pay handsomely, while other shoots should pay less. Sometimes I think I’m selling myself very short again. But then again, plenty of other photographers would jump at the opportunity of what I’m doing.

Many times, the pictures aren’t the difficult part. It’s the scheduling that takes a while. To try to fit it all in a nice tight little schedule. It worked out perfectly yesterday. Crossed the border around 4 pm, and had a photoshoot for every hour there on in different locations. It was fun. I enjoyed it.

The first shoot was at a drug/alcohol recovery place for LGBT people. I got hit on by a big black guy.

At first, he was just like “Hello young man,” as I walked out to the car to grab my camera. I just said “howdy!” Grabbed my camera, went inside to take pictures of what was needed. Black guy was like “you want some candy?!” and pulled out a big bag of shitty candy. I rejected it. He then offered me donut holes. Fuck. I love donut holes. Imma gunna eat some of that. He was all excited that I accepted the donut holes.

I mean… It might have been just an overtly friendly regular black guy (though I was in an LGBT space, and the manner he talked, I know he was gay).

And after taking pictures and just hanging out for a while he says, “when you are done with your photo gig, you should be on the radio, your voice is great. You are also very good looking. You could be on TV.”

I was flattered. But come on!!!

I love me the gay loving though. Gay guys are always super nice to me.

After that, my other shoot was at a place called The Godfather. It looked like your stereotypical Italian mafia restaurant.

Got the shots I needed. Bounced.

US Grant hotel. Fancy stuff. I was there years ago…

I followed Ashley Tisdale all the way from Los Angeles to San Diego (driving) and she stayed there. I was with my brother. We worked in San Diego for that weekend years ago following Tisdale around… Or like how another paparazzo friend used to called her “Jizzdale.” He liked her a lot. I never thought she was attractive.

Before the hotel, I got some Luigi’s pizza. I think I got the same two slices than last time. 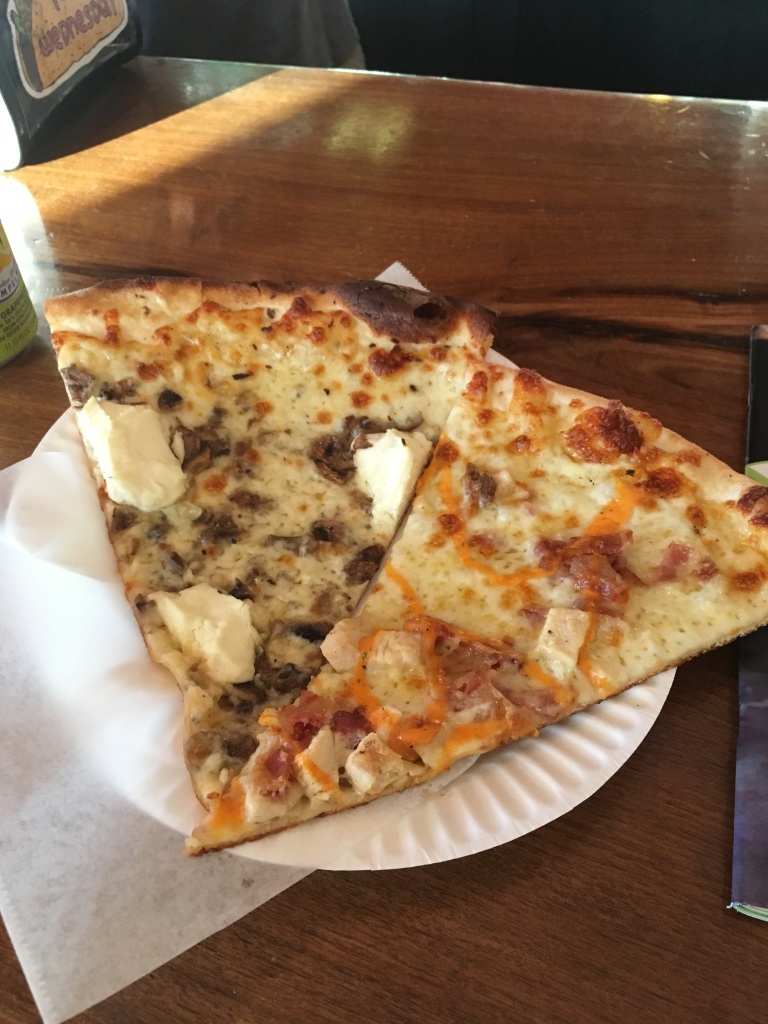 Donatello and white girl?! I think that’s what they are called. Luigi’s is fucking good.

This time, at the US Grant, I was there to meet a piano player named Archie.

Dude was great. I thought he was going to be a dick… I was completely wrong.

I told him I was also a musician, he said he hires guitarists for gigs when needed… So… Uhh… I should pick up my guitar and get to the level I was a few years ago.

Getting gigs as a guitarist would be AWESOME!

That’s what I was trying to do years ago.

Which reminds me. I should really make my business cards. I need those.

Thanks! I got your email. Sorry. I don’t have business cards. Bye!

Getting the same shot over and over. Not sure if it’s what they want. If it’s what I needed. Not sure what to do.

Snap snap snap. Ok. This should be enough.

I arrived early at the Red Fox… and my girlfriend asked me if I was going to grab beers in San Diego or if she should buy some.

There was a liquor store two blocks away. I took care of it. This is the haul:

Joined my girlfriend to help her with the laundry just now. Back to the word vomit.

And I wanted to say… sometimes I feel like I annoy the fuck out of my friends…. Especially the ones in San Diego.

Maybe I should try to stop being a dick….

That Cream Ale by Mother Earth is, for me, the standard of cream ales. It’s fucking delicious. It tastes like sweet cereal beer. I had it before. I had it again. And loved it. And yes. It’s on the sweet side. Dessert beer for sure.

Blood orange IPA by Latitude 33° is pretty great. It has 70 IBUs but it doesn’t feel that hoppy at all. It has a fruity taste. It tastes like an IPA watered down with orange juice. Like a mimosa beer. A very drinkable IPA for those who don’t like their hops heavily pronounced. And definitely a noob friendly beer. I enjoyed it, but not sure if I would buy again.

I had the other two before and remembered that I liked them. But unsure. So I’ll have them again. Those are still closed. And it’s lazy Sunday. So I should open one soon.

I rejected that photo gig with the complex contract. Dude just said “No problem!” So I don’t think he cared much. The contract was stupid and I didn’t agree with it. Much less for just $50. Losing ownership of my pictures for just $50 is a no-no. I would have rather go to the concert and do my own thing than being under contract. It was completely unnecessary.

I just wanted to go camping and take cool pictures of the place and listen to some new bands while drinking beer and shoot shoot shoot. That’s not going to happen.

Took that off from my whiteboard. Took out all the photo missions. Now there are just a bunch of writing missions. And other shit that I say I’m going to do but I never do. Seeing it on the whiteboard makes me want to do it though.