My girlfriend cooked dinner while I did office type work.

The desk has always been like my office… but now with the whiteboard above me, it feels more real. I like it. It shows me clearly what I have to do.

My schedule has always been pretty open to anything. With a couple of dates reserved. Now it seems like there is shit to do every day. And it’s Saturday. Saturdays don’t feel like work days. But I have work to do.

Yesterday I scheduled some photoshoots for night time. The scheduled shoots are from 6 pm to 10 pm. Then there is a non-scheduled shoot because I couldn’t reach the people, but just hoping to go and see if I can meet with them. If that doesn’t happen, I’ll go again soon.

While I was scheduling shoots, emailing, phoning, office type stuff… adulting… My girlfriend was cooking.

Thai rice noodles with a tomato sauce with garlic and cherry tomatoes and more. The sauce was somewhat similar to her breakfast sauce. 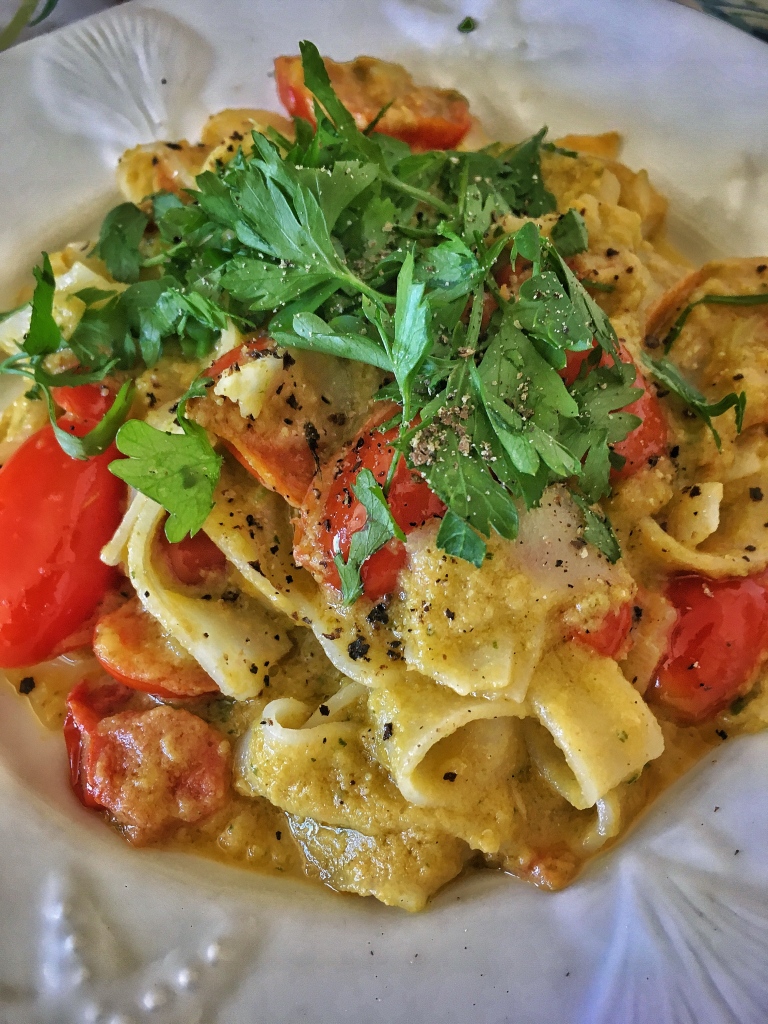 Add shrimp and asparagus (or artichokes) and it would have been extra killer. It was really fucking delicious.

And she was really happy with the cherry tomatoes. A huge big bag of them for 10 pesos from a street vendor. That’s like 50 cents for 2 kilos of cherry tomatoes. And they were fucking tasty. Are! Because we didn’t eat them all.

She’s getting ready to go buy ingredients for breakfast now.

I have to word vomit and get ready to cross the border to work. Should be pretty easy. I’m getting used to the gig. I need my own car.

While she cooked, she drank beer. While we ate, she had more beer. I was hungover, so I kept it on coffee.

So I was going to let her sleep and just go meet up with Bryan for a couple of beers and come back… but she decided to not sleep and come out drunkenly and pissed at me because… well.. I’m not sure.

She probably doesn’t remember much…. but is the drunkest I’ve seen her…. Maybe because I was completely sober, I saw her in a different light. We usually drink at the same pace…

She’s hilarious all the time. But drunk is even funnier.

We met up with Bryan and Chamis (another friend… who I haven’t seen in a long time) at Santuario. The new brewery. 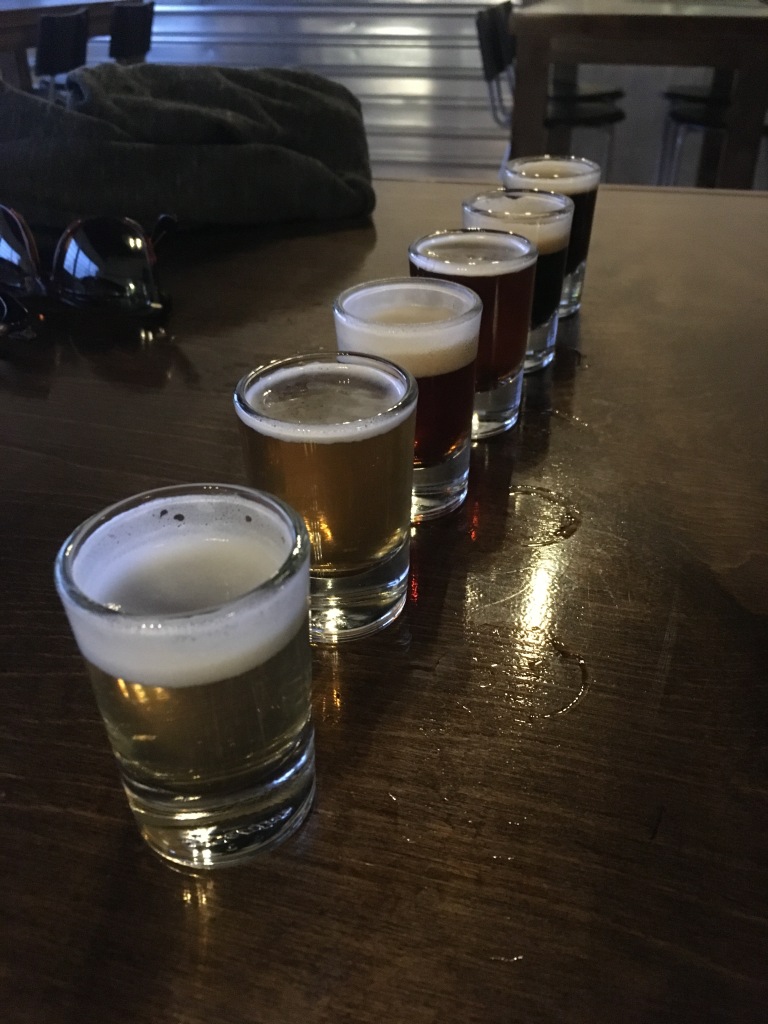 Picture by Karla because she was shouting at me that she wanted to take pictures of the beers. She took like 10 pictures. This is the most decent one (unedited). Those were my beers. She was already pretty drunk, but the walk sobered her up. The beer I bought for her didn’t.

We waited for Bryan and Chamis for a while there.

Got all house beers. For her the double IPA, for myself the Cranberry Tart Ale.

The double IPA was on the syrupy side and the hops weren’t really there. Also heavy on the alcohol taste (9% and very pronounced). Nice lacing.

Cranberry Tart I thought was great. Nice tartness to it with a slight fruity flavor. Girlfriend didn’t like it. It’s hard to imagine people that would that haven’t really had tart ales before.

Then…. because we were still waiting for Bryan… I asked for the tasters of all the others I haven’t had.

First two, Kolsch and Blonde, were simple light beers with little flavor that went down smoothly. Amber ale and another one that I forgot where… well.. forgettable. Then two porters. One was a simple good drinkable porter. Second was vanilla with cold brew from Guerrero. The second one was better. It wasn’t sweet or bitter, but very well balanced between the coffee and vanilla. It would be interesting to see it on Nitro.

This is about Santuario brewery in downtown Tijuana. It opened a bit over a month ago and I must say, they are doing a fantastic job so far. They also had a beer that wasn’t from the house (Silenus double IPA. I like that double IPA better. Mamut’s was fucking fantastic though. They need to bring that back).

I should write more about beer. And take awesome pictures. That felt nice. I know a lot of other people do it, and much better than me, but it’s fun. Though I feel douchey when I ask if they know the hops they used…

Bryan and Chamis finally made it.

They got beers. I got an extra pint of the porter vanilla. Then we went out to eat empanadas at Tucumano.

A few more beers at Norte.

And home we go!

And I wish I can just be lazy all of this Saturday. But I can’t. I am going to have breakfast with my girlfriend, buy cat litter and the big jug of water, grab my brother’s car and away to work!

I was supposed to go take pictures for a concert on June 3rd. Got an email with the contract this morning.

It feels really weird and I feel really bad about it. But I’m going to reject the contract.

I don’t agree with most of the terms. It’s only $50 (and they are throwing the “entrance” for free like if it was pay). They expect me to work all the hours of the show. I don’t get to keep the rights for my pictures. And more technicalities that I don’t agree with, much less for just $50.

Their idea is that I work all day and all night and not partake in the festival.

And I opened the festival last year! I didn’t get paid for that shit. I’m sure bands get paid…

Yeah. I feel super douchey. But can’t be selling myself short.

I want to reject the contract right now. But I’ll wait and see if I can up the money, change the terms, or something. Because there is no way I’m doing all of that shit for $50. I’ve been doing good. The days I work I make over $100 per day. Now if I worked more often, I would be doing excellent. With how I’m doing, I really see myself making around $200 a day. Tours, photography, and writing. If I get the job that I was recommended it for… then I’ll for sure be banking and this blog will most likely die.

My girlfriend is cooking a lot :) It smells so delicious right now.

She’s so fucking good in the kitchen. That makes me so happy.

Yeah. The more I think about it, the more I disagree with this contract. Talked to a photographer friend and he was also like “fuck that!” For $50 I’m selling myself way too cheap. The pictures I was going to get for $50 were going to be awesome as well.

I mean… the art gallery, A Ship In The Woods, paid me $50. It was 3 hours or less of work. I went around taking awesome pictures. And now they use one of my pictures as their main picture on their website. Just checked the website, yep, my picture is the first one you see. There are OTHER awesome pictures there by other photographers, but I like mine.

There might be other better photographers that will do that for $50. But not I. Not I.

When I started writing this, I thought I would turn it really political because of all the Trump shenanigans that have been happening. But I completely forgot about it. But shit. How’s that shit going, huh?! It’s still to surreal…