Yesterday was a blast.

My legs were hurting real bad from bowling. They still hurt. The clients arrived earlier than the hour they said. We were supposed to meet at 10 am. I messaged them at 9:30 am to see where they were at… they were already at the border.

So I ran towards the border to meet them. I had them cross to Tijuana to saved time. Met them at 10:01 am… nothing is fucking opened in this city at the time.

Nelson was closed. La Cevicheria Nais was closed. And they were meeting the Airbnb guy at 11 am.

Tour had a bad start.

We got to Playas at 11 am and did not find the dude. Just some workers of the building, they explained how the apartment worked. The apartment was pimped out and had fancy modern touch screen locks. It also had a full on disco light settings with a karaoke machine. One of those home entertainment systems. It looked like a five-star hotel. Penthouse on the beach. Only $169 for a night with rooftop access. And the rooftop was also freaking cool and spacious. It could easily be rented for a great party.

After being wowed by the Airbnb, we walked around to shitty Playas restaurants. The place that I like by the beach was also closed. Instead, we went to the one I used to use for Playas tours that is okay.

Bucket of beers (2 beers for each of us) and 5 tostadas especiales (shrimp, octopus, and fish) for a total of $34 + tip.

It was okay for me. They liked it as well but didn’t finish it because it was a lot of food for one tostada. They were loving the salsa and the cheap beer.

The guys were cool. Four guys that met each other in their University’s baseball team in North Carolina. Southerners.. Three years younger than me. Which I find weird still, to remember I’m 31. Older than 30 has been a shocker for the past year.

So obviously they were into baseball.

We went to that nice 7-eleven by the beach, grabbed a 12-pack of Tecates, water, and a 2-liter coke.

Another two beers for each on the rooftop of the Airbnb with the ocean breeze.

Late enough to go somewhere else.

At 2:30 pm we got on an Uber towards Norte Brewing Co.

Norte was Norte and wowed with the views of the city and its fantastic beer.

Yep. They were also huge fans of craft beer.

We went to Lúdica/Teorema after for even more beers. Great beers. Drunkish by then.

Walked to Teléfonica for tacos and more beers. Obviously, they were loving it again. Teléfonica doesn’t fucking disappoint. Tacos from La Carmelita and Otto’s Grill are a fucking guarantee.

I was feeling tired. But hey. I got hired to party.

Uber to Plaza Fiesta for more beer. Insurgente was the choice because it’s the greatest beer there.

We covered a shit ton of ground.

Playas to Centro to Plaza Fiesta to the fucking baseball stadium all the way in fucking Cerro Colorado.

Ubers were pricey because long distance and XL. But not for them. So fuck yeah!

Thursday night against the #1 team who beat Toros last year in the final last year. Toros got owned again…. But who the fuck cared. It was shit tons of fun.

Tickets weren’t a problem at all. We got to the stadium 30 minutes before the first pitch. 100 pesos for each ticket for a total of around $28 USD.

MLB tickets would be shit tons more money. Just clicked on a random guy of the Reds vs Rockies for tonight and the best seats are $258.

Girlfriend just got home. She got the job, but not really. It’s not even that much pay and they have to do all these studies to actually give her the job. Makes no fucking sense. This sucks. Tijuana jobs are insane. She’s worried she won’t pass certain tests…

If she does… I guess she starts work in 11 days. Till the end of the month…

But where was I?!

Ahh! I need to start the day. And get over with the word vomit.

And baseball fans, of course, are going to fucking love it.

The cheap tickets were right behind the dugout of the visitor’s team. The second row.

First row was also empty, so one of the guys sat there.

The mascot was eyeing one of the guys.

We walked around. Got more beers. Got churros. And since some seats behind home plate were empty… we said fuck it. Let’s sit there.

No one bothered us to switch seats or anything. More beers!

The game was 8-0 by the third inning. But it was still great. People didn’t leave. There were a couple impressive double plays. Baseball guys were loving it. Called it really good baseball. So besides all the insanity, you really get entertaining fucking baseball.

On the 8th inning, Tijuana final scored. It ended 8-3. With a home run. We were excited and high-fiving and the rest.

And one of them started celebrating.

And was featured on the giant screen.

The stupid story videos I post on my IG.

Not sure why I feel the necessity to show them here.

And the whole time was a great opportunity to push social media on Tijuana Adventure. I can easily make that grow… if I really wanted too.

I gotta email the boss as well.

Ahh gotta finish this and I haven’t even gotten to the good part.

The guy that was dancing was featured again. But he was sitting next to me. And it was on kiss cam mode.

So I pretended to kiss him. Because I did this, I couldn’t see the screen. So I have no idea how shittily that looked.

And after a while… I got featured.

They compared me to Cletus Spuckler from the Simpsons.

They used this photo for half the screen, the other half was a recording of my face and reaction… 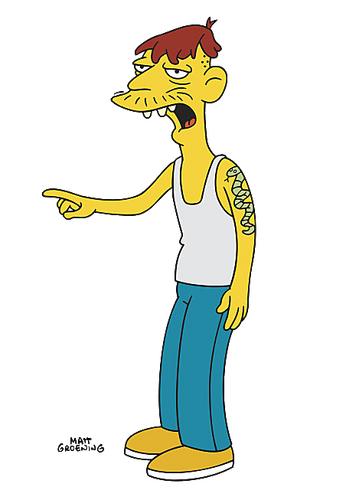 Do you see the resemblance!? Fucking uncanny right?!

I think they did that just because I had tattoos. Or maybe I do look like that. I’m not offended. I think it was fucking hilarious.

So I was featured on the giant baseball screen. Every time I go I wondered if it would happened. It finally fucking happened and I thought it was hilarious.

Around 10% of the people get featured on the giant baseball screen. That’s how they keep the games so fucking entertaining. They constantly troll the crowd. I got trolled.

You know you can follow this shit on my IG @Matingas_

I had to put that shitty underscore.

Oh! fuck this. You can’t post videos on WordPress that easily.

These are horrible videos. Shot vertically because that’s how IG stories are and because it’s a fucking phone.

They don’t deserve a Youtube upload. But here it is.

Those were our original seats.

And this is one of the guys celebrating the home run (his name was also Matt).

And nothing related to anything.

This is my most watched video…

That was after Mexico won a World Cup match…

Now shower. Work. Work. Organize shit because tomorrow I have to shoot that cover and another story. Great!

I don’t like putting things near the deadline, but I got busy this week. At least, I’m erasing shit from the whiteboard… just to fill it up again. And keep working. Work work work.

And I should really get to the writing.

And someone inquired about a Tijuana Adventure for today. Touring craft beers with his wife. I wish I could attend him… maybe I still can.

I’ll push the social media on Tijuana Adventure as well. I need money. So I can get my girlfriend a VISA. And because we like good beer and good food and that costs money. And we want to travel. That also costs money. MONEY MONEY MONEY.

I need like a day of rest after that much partying for work.

Which btw. I got paid more than what I asked for. I’m going to start charging more. My tours are always a blast. I haven’t had one bad tour yet.

After baseball, got an Uber XL and we headed back. I dropped myself at my apartment and instructed the Uber to take them to theirs. That was 14 hours ago. I made it home at around 11:15 pm. After 12 hours of drinking and partying. I’m sure they are alright, they were passing out on the Uber. But probably a bit hungover as well.