Hah! You thought I was going to skip the Sunday blog?

Honestly, I should really skip today’s blog. I was planning on writing it earlier, but I got distracted with my girlfriend because we didn’t spend the night together yesterday.

And I should skip it because this is the first time I feel this way about her.

It’s not a good feeling.

I just don’t get it.

“Baby, you are the best, I love you.” She says that to me often enough for me to believe it. I don’t know if she means it.

It’s like she plays a character. I’m not sure who she is sometimes.

I spent the night in San Diego at my roommate’s girlfriend’s place. Which in reality is like his other place.

I got back a little bit to Tijuana around 1 pm.

I watched the “El Clásico,” Barcelona vs. Real Madrid, on my cell phone on the trolley. Amazing what technology can do. The transmission was pretty good. Especially because I pay for a Mexican plan and it works wonders in the US.

Ever since I got back, I haven’t been able to say anything that hasn’t made her mad or started a discussion.

No matter what I say… It goes to shit.

And I’ve been wrong so many times today, that I got fed up.

Why is she with me?

What does she see?

I think she sees a fictional character.

She puts me up on a pedestal and doesn’t realize it. I don’t have that much potential. I’m not that great.

She hates it if I talk shit about myself. But I am.

I used to listen to this shit in college.

I thought of them because I typed “say anything,” before. Then I remembered I really liked this song.

I remember the whole album. But this is the only song I remember.

Sometimes I miss Minnesota. It’s probably my youth. And college. And the lack of consequences.

“Don’t fuck it up, Matt. Don’t DARE to fuck this up, Matt. It’s the best relationship you have ever been in Matt. Seriously. Do. Not. fuck. This. One. Up.”

It’s fun to fuck things up.

She could leave right now, and I would let her.

I would regret it later.

But right now I don’t care.

I don’t know why I have so much anger.

It created this, let’s call it “shell,” around me that deflects fucking everything. I don’t like “shell” though. It’s more like an aura. A fuck everything barometer that deflects all.

This is the first time it activates with her.

Probably one of the persons that I have the most tolerance with this shit barometer is my roommate Chad. It follows with my Minnesotan roommate in college, Woody. My threshold on my shitty barometer is the highest with them. And yet they both broke the barometer. Moments where I was just like “you know what, you can go fuck yourself.”

Egos that clash. And mine. A delicate flower of an ego easily shatters my shit barometer.

When it comes to women.

That shit barometer of fuck everything is extra sensitive.

I’m actually amazed that my shit barometer took this long to break.

And it’s not that it’s been three months. I could have dated other girls for three months and pretend that the shit barometer wasn’t breaking. I’ve done that before.

It’s been three constant months of being with each other whenever we can. And most nights.

It’s been way more than three months. It’s been many hours.

The most hours I have ever spent with a woman in my life.

And I don’t believe there is any other woman greater than Karla.

(This is the first time I mention her name in the blog.)

I truly don’t think there is.

Or if there is, I haven’t met her. Or haven’t even spent enough time in this world to really know if it exists. But my time of being is dwindling.

Fuck it. It doesn’t have to be a woman. It could be a man.

I came to terms with my sexuality a long time ago to realize I could never be with a man.

But hey gay guys! I still encourage you to try.

My narcissistic ego loves gays hitting on me. 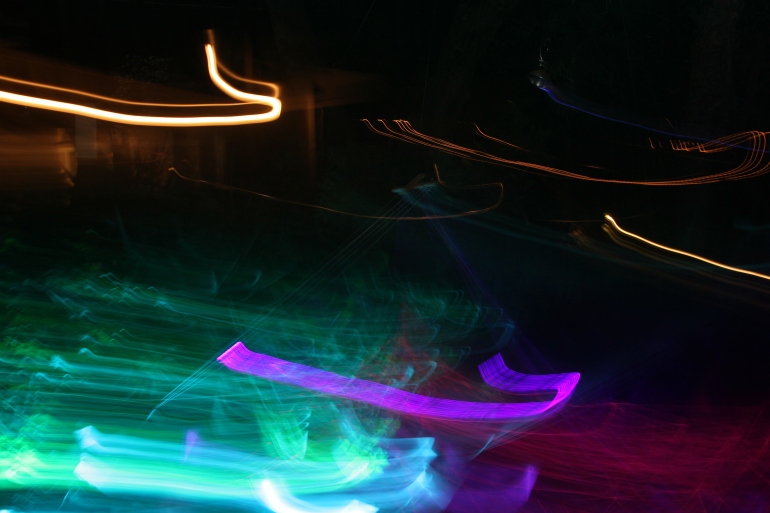 That was one of the worst pics of last night.

It was an art show with artists that concentrate in trippy lights and visual effects in the middle of nowhere California. Some exhibits were really amazing, especially the virtual reality art. It was my first time wearing VR glasses. Again. Technology is fucking fantastic.

The whole thing was worthwhile. I was there for around 4 hours taking pictures and doing other little help. Tons of people showed up and donated. I had a blast. I texted my girlfriend a lot because I wished she could be there.

After that, we went to In N Out and then it was bed time.

It wasn’t that outlandishly nowhere. Just in north county San Diego. Passed Rancho Bernardo. A Ship In The Woods. Amazing house in a state park that had wild rabbits running around and shit tons of insects everywhere.

It’s amazing how little it takes to get away from the city to feel submerged in nature.

And there was a road next to the house…

Not to mention it was nice huge house with a pool, electricity, and crap.

I’m a city type of person.

I always will be.

Maybe when I’m an old fucking fart, I’ll enjoy being in a cabin in the middle of nowhere.

I took a total of 365 pictures last night.

It was exactly that number when the night ended. Nice and round 365.

I’ll get to edit them tomorrow. There were some really great pics that I think are fucktastic. The edit is going to take a while.

But tomorrow is throwback celebrity Monday. So I’ll end up posting some shitty pictures of things I used to take in the past of some asshole that is famous.

I look at the past way too often.

After all this word vomit.

Because I still love her and I don’t want things to go to shit.

Another one that breaks my shit barometer quite easy is Pinche Paco.

And a lot of other people.