My Girlfriend Broke Up With Me – Slow Morning – And No Car

I don’t know what happened. I thought we were fine.

Yesterday she woke up to go to work. Like always we cuddled a bit before she jumped in the shower. Then she kissed me goodbye, and I passed out for an extra hour or two like I always do.

I didn’t hear from her all day.

I figured she must be busy. So I let it be.

She didn’t reply when it was almost time to get off work, and I started to get worried. Not about anything serious, more like worried that she hasn’t eaten all day because she tends to do that from working too much. And because I didn’t know if she was getting off work on time. And I didn’t know where I was going to meet her.

I was about to leave the house when I noticed I had an email from her.

It was a break-up letter. The end of the email read “stop wasting our time.”

It was really well written. She sends me emails from work sometimes. Mostly cute little love notes with some broken English.

This was way better written. And it read like a break-up letter. My heart sank. I didn’t know what to do. I didn’t want to panic. I had no idea what was wrong. Everything seemed so fine. This came out of nowhere.

I emailed her back confused. She wasn’t replying on Facebook. I had no idea what to do next. Not only of the day, but of the upcoming weeks. I kinda saw us together for a while. I didn’t think it would end that soon.

I emailed her again and asked her to call me.

She called me, but still sounded busy. I could hear her talking to office people, and after some minutes of waiting, she told me she will call back again.

When we met, she explained that that was a mistake. Sending that email. She didn’t mean it.

Apparently, she writes me more than just one email when she sends me her love notes. And some of them are not love notes. They are dark notes. And writing them helps her out.

I was never meant to read it. Or maybe I was.

We didn’t really break up.

It felt like it for a moment. But there was no reason for it. She was frustrated with work and with life. She gets like that a lot. And I got an email that I wasn’t supposed to read.

To recap. No. We didn’t break. We’re still together.

She sent me an email today already.

The complete opposite of yesterday’s email.

Besides that cheesy relationship drama, the day went alright.

I realized that this might be just easier to show up and take pictures instead of calling ahead. Restaurant businesses are tricky. It will be an easy shoot.

I also sent a bunch of emails. Many which were ignored. And they are slowly replying today.

But tomorrow. Tomorrow I work a bunch taking pictures.

Writing articles… I’m not sure. I have two stories to work on that I haven’t.

Oh yeah. And the special edition article. I should do that soon.

It was a very slow morning. Of not knowing what to do. I thought I was going to be extremely busy, but I wake up and just stare at my computer thinking to myself “now what?”

But I get distracted by Reddit and other stuff.

I poked my head into /r/The_Donald again just to see what those crazy kids are up too.

Yep. They still believe that Trump is MAGAing and everything is going fine. Things that are not going the way they like, they blame the democrats and call them cucks. It’s actually just a bunch of insulting in that sub. Insulting everyone.

I haven’t even followed it at all this year. Just this last recent quarterfinal games. And I just want Bayern to win vs. Real Madrid. I’m kinda done with Barca, so it would be nice to see Juventus win. And Dortmund is still in the race. That would be cool too.

But in reality, I don’t care.

And just like that… When I finished writing that sentence… Real Madrid scores a goal.

AND NOW another goal by Bayern!

I just realized I have my timeline mixed up.

My brother’s car broke down. He just informed me because I asked him if I could borrow it tomorrow. I hope it’s nothing serious. And this is after I was thinking about buying the car from him (if he even sells it to me). Also, a friend recommended me to go to the Otay Auto Auction. It looks like an interesting choice.

Leasing through UberXChange Leasing is not going to be a thing. I got a weird vibe from it. And I am also getting a weird vibe about working as a freelance Uber/Lyft driver. So I’m doubting myself about doing that. But I would like to have the choice to do it.

I just need a nice car.

This UEFA game is so good…

I forgot what good football is. 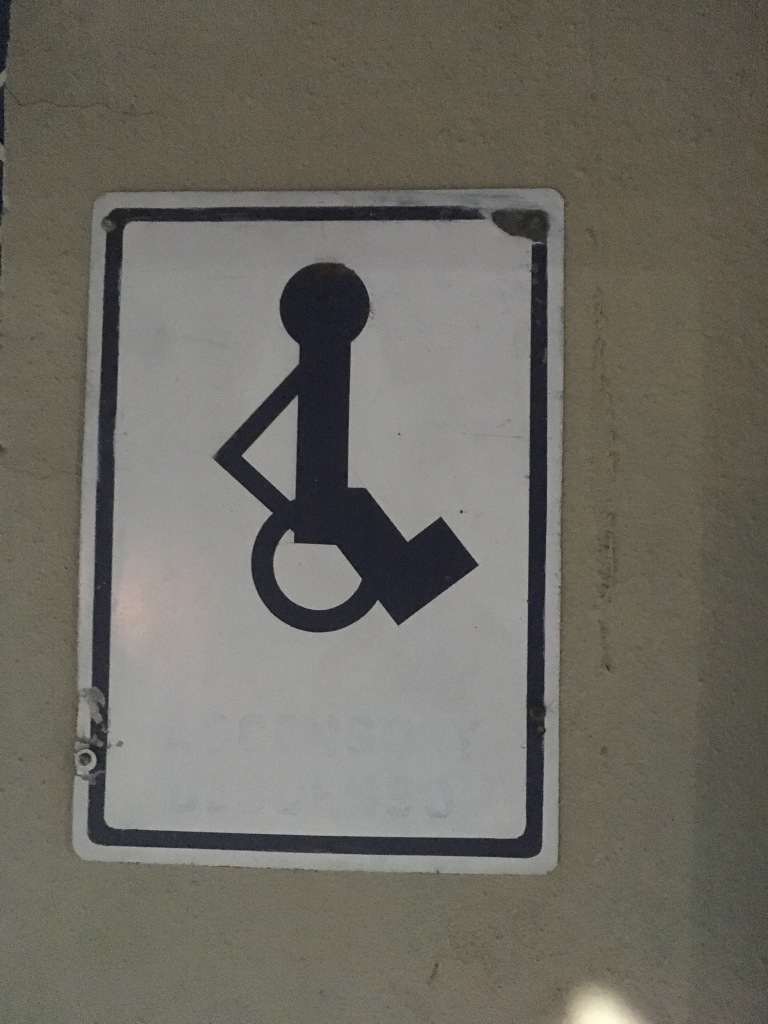 So how about this handicap sign I found near my house. Weirdest shittiest drawing…

My girlfriend is flying out of Tijuana this Friday to go see her parents and to a wedding in Monterrey. I would go with her, but she is just going for two days. If I flew over to Monterrey, I want to enjoy the place for at least 4-5 days. So I’m not joining her.

New to her. Let’s see if she likes it.

I haven’t been playing Zelda much. Yesterday I played for less than an hour. Did the Korok challenges and then found a random shrine in the middle of nowhere.

I still need to beat Calamity Gannon and finish the “main game.” Still tons of shrine and side missions. Tons and tons.