I don’t have much time to word vomit this morning. Adulting is getting serious and my calendar starts to get more packed. I have to run in less than 30 minutes to meet another writer to do some photographs for his story.

I woke up before dawn. I keep doing that. And I keep looking out my window to see beautiful pink and blue and orange and the rest. Explosions in the sky. Is a very boring band. 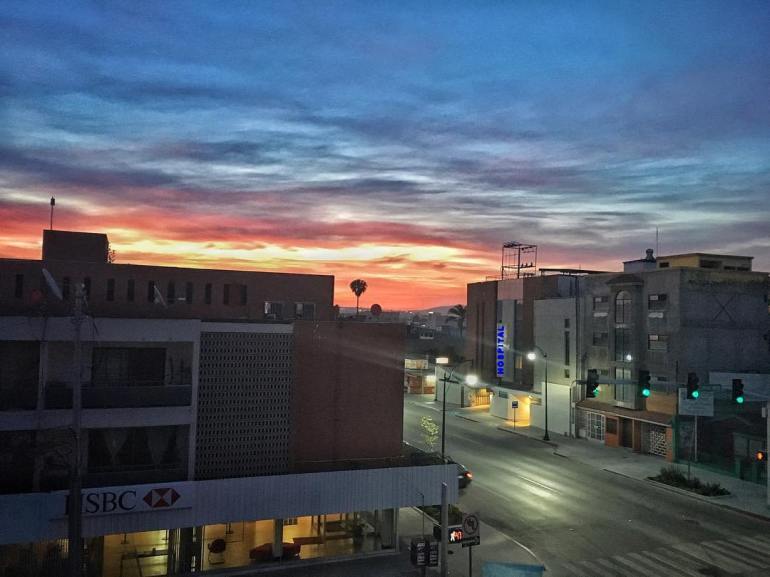 Photo on iPhone from my kitchen window and edited with Snapseed while I was waking up cuddling with my girlfriend.

My girl does her morning routine, while I go back to sleep for another while.

Then she disappears and lets coffee in the kitchen.

I’m drinking that coffee and thinking about her while still talking to her. I love it when it is going great.

This time I woke up to a barricade of emails. And one urgent facebook message that was odd and I had to take care of it right away.

Actually… I have a bunch of emails to send.

There. Bunch of emails sent. And another photo mission appeared! Oh yeah! So much adulting. But I have to run in 17 minutes.

An old college friend just tagged me on a post about Zelda… Oh god. Now I want to play Zelda. No spoilers for me, and something I already knew. The maraca Korok dude is somewhere near the Lost Woods so I can find the Master Sword.

Yes. I have one row and a half of hearts and over 95 Korok Seeds and I still don’t have the Master Sword and haven’t defeated Calamity Gannon.

Last few times I play I just go explore territories I haven’t been before. And there is so much of that. And there are Korok Seeds fucking everywhere.

But my play time has been reduced to an hour or less each day. I barely played yesterday. I’m not sure if I’ll be able to play at all today.

Also, I send a query yesterday. So I have more stories to work on!

Shit. Uber hit me back up as well. I need an American phone to confirm stuff with them and see if they will be able to give me a lease.

And I’ll be in San Diego all of Thursday. At UCSD to be specific. I’m somewhat nervous about it but at the same time I know I’ll be completely fine. They are just people. I used to shoot celebrities.

It’s fine. Pretend to be Andy. People like the Reader. Photographing is cool. More gigs. More money. More responsibilities. Look at me adutling.

I’ll finish this later. I have to go for now. Let’s see how it goes.

Well… THAT TOOK way longer than I expected.

First of all, the person I was meeting was 45 minutes late.

So I wanted to order breakfast at the place we set up to meet (Praga Cafe). Turns out that fuckers don’t serve breakfast past 12:00 pm. I actually arrived there at 11:55 am, but they didn’t give me the menu until past noon. I asked if they could serve breakfast, they told me to fuck off. Seriously!? I can’t get breakfast a few minutes after your time?!

I hate this ideology. It’s like fuck man, you have the ingredients right there and I want fucking breakfast. Why not?! Isn’t the customer always right?!

I ended up having lasagna for breakfast.

Here’s an unedited shot of what my breakfast looked like. Yep. Lasagna was extremely creamy. And yes. It was good. But seriously, lasagnas are usually good. Unless you are a really fucked up restaurant, you can’t make a bad lasagna. Them fuckers are delicious.

That lasagna is all I’ve eaten today. And I’m hungry, but I have pictures to edit.

Once the person I was supposed to meet arrived, I found out that things weren’t going down as I thought they would. I thought he already had the story written. I thought I only had to take pictures and then bounce.

I was so wrong.

More people arrived. Not only the person he was interviewing but the family of the person.

This is a Haitian story.

Something I’ve been wanting to write. But this writer beat me to it.

At least I’m getting paid for the pictures.

It was also an opportunity to shadow an experienced freelance journalist. And make new contacts.

He actually invited me to the next speed dating with editors. Some sort of way to get new gigs. I really should diversify my portfolio. And he is a really nice guy that has been talking wonders about me. So that’s good. I’m all good.

It was also an opportunity to meet wonderful Tijuana people. I am obsessed with Tijuana people and it’s history. The house that we went to had a great Tijuana view. The house was a complete mess since it had been abandoned for 6 years, but it was in the process of getting fixed. I would love to have a house like that in Tijuana.

So we went back to the family home. I sat down through the entire interview which took almost two hours. The interview was also in three languages. I would hate to transcribe all that went on.

Great story. Sad story. Happy ending in a way. Should be really interesting.

I can’t wait till it comes out to see the end result. And see my pictures in there.

My girlfriend is almost done with work. I should meet her where always. I need food. She needs food. We need beers.

Yesterday, she had a craving for oysters. And apparently, she really liked the restaurant that I surprised her with two weeks ago (Lionfish). So we walked there. We got oysters and a big fucker molcajete of seafood. Also, tons of chiles, because that’s a rule wherever we go out. And obviously, craft beers (Astillero IPA by Agua Mala).

There’s a video of me eating a chile. It wasn’t that spicy.

That video was uploaded to IG stories. So yeah. If you wanna see stupid videos that last ten seconds of my everyday stupid shit, you got to follow me on IG.

Then we came home and I put the show “Love” on. She didn’t like it. She said that now she knows I like soap operas. And I guess it kinda is. I like that show. It’s funny. And it reminds me a lot of my days in LA. And … of course… about the silliness that is love.

I like almost anything by Judd Apatow. So yep. I’ll continue to watch it. I guess when she’s not around…

I’m hungry and I have pictures to edit and beers to drink.

I will be more and more busy each day. More busy. Busier. Whatever. I’ll have to somehow find an hour or two a day to word vomit. That’s how long it takes me to word vomit. Daily word vomit.

You are the one that reads this shit.