Let’s get this Monday started!

Push-ups. Shower. Mexican pizza for breakfast. Babe is at work. She had to fire someone today, but the girl quit before she could fire her. She got called a horrible boss and a bitch. She’s fine though. The girl that she hired (from what she tells me) was a horrible employee.

I don’t want to get this Monday started. Or the week. Yep. Just want to play Zelda. 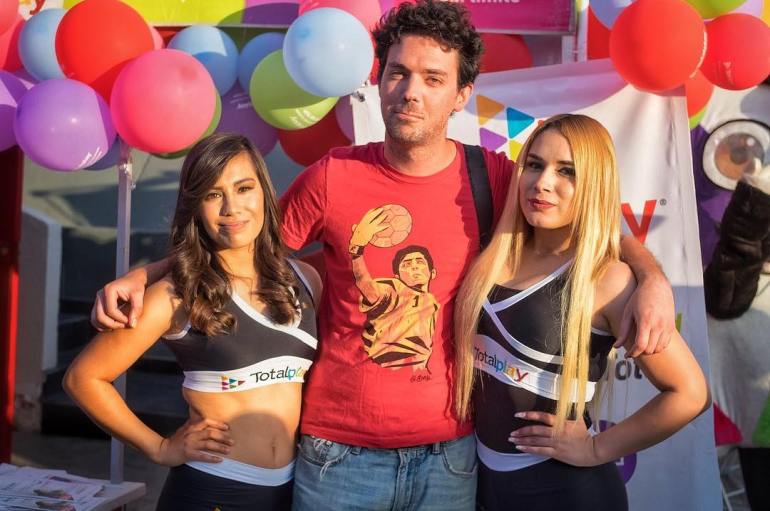 I look so horrible in photographs…

My brother thinks this girl looks like Amanda Peet. 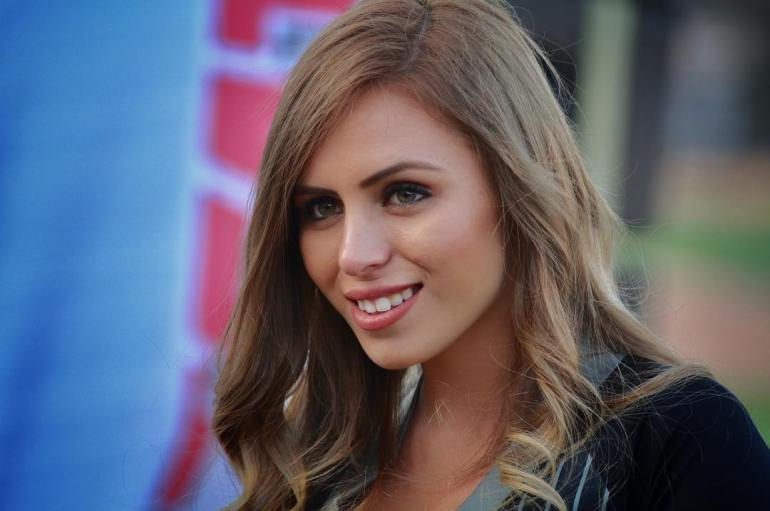 She doesn’t. I saw Peet a lot. She was never fun to shoot. And she always looked dreadful.

This girl, besides the horsey face, is way prettier than Amanda Peet.

Yesterday after my little shitty boyfriend drama I went to Nelson Bar to cool off and watch the game.

It was pretty stupid.

In front of my face. “Why do you change the channel for ese pinche güero?!” I just laughed and shrugged it off.

I just laughed and shrugged it off.

6 regular customers at the bar got mad at the bartender for switching the channel. Threw a hissy fit. Left their drinks on the bar, and fucking left.

Fucking idiots. They are going to be back soon.

By the time they were leaving the bar, the baseball game was over. No one bothered to check the score or look behind their back. They threw a hissy-fit just because they didn’t have it their way and the bartender put his foot down.

Fucking 50 and 60-year-old dramatic idiots. Seriously. The bartender just switched the channel, and they were so fucking dramatic about it.

My girlfriend invited a friend that I know from crossing the border to the movies.

She knows I don’t enjoy going to the movie theater. Much less to watch Beauty and the Beast.

I came home and passed out early because beer and I was emotionally drained.

Not only I had my own personal brain drama, that shitty Nelson drama was pathetic. It made me even feel more pathetic.

And here we go!

Shit! It’s already April! I have been with my girlfriend for 2 months.

This week… nay this month has, pretty much, an empty calendar. No tours. Not much to work on. The taco article and help with Tacotopia in general.

I have to pitch stories.

Two articles are on my mind. One is about food. The other is about Haitians. The latter one has been in my mind for over three weeks now and I don’t write anything about it. The food one. Well… Meh. Food article. I want to write it for fun, not really because of money (because it’s not much), but just because I want to write it.

I should check my status with Uber. Having a car would help a lot.

I’m running out of money and I’m still doing nothing but playing Zelda.

At least I have rent money ready and bills are paid.

But shit. I just took out money a couple of days ago, and… IT’S GONE. Yep. Opened my wallet and there is no more cash.

Toilet was not really fixed. It is still leaking a lot. I have no idea where from.

Girlfriend came home from the movies with her new friend and brought some beers. I played Zelda while we chatted. I also ordered pizzas. That’s why I have a couple of slices left for breakfast.

I still haven’t beaten Calamity Gannon. I don’t really have interested in doing it. I’m just traveling the map finding Korok seeds and hidden shrines. Wherever in the map, there’s a lack of blueness, that’s where I go. Until I cover the whole map.

I killed a centaur. Those fuckers were tough. But that I can kill one seems like I’m getting cozy with Link’s power.

Game is so good that I want to start another one just to play it differently and to be weak again.

And yet again… found a stable that I was probably supposed to find at the very beginning because the people in there started explaining how to ride a horse and there are horsey courses and shit. Yep. Never explored that part of the map at the beginning.

I saw her more than ten times and she was never nice. I tried different approaches. Long lens, short lens, niceness, complacentness, fuck it, that’s not even a word. I don’t know. I just know whenever I had Amanda Peet on my list I would give a long sigh and be like “oh well, let’s shoot this chick who is next to worthless.”

The only memory that I have her on movies is her showing her tits in some Matthew Perry comedy that I forgot the name of. Her pictures barely even sold.

And it is becoming customary to say “fuck plugging in my hard drive” let’s see what my iMac still has. It has three folders. They are all crapshoots. I mean, two of them are not that bad because I’m a good photographer and got the material I needed. But Peet was such a pain I’m not going to bother either editing her pics or choosing were she looked best.

That day I also saw Adrian Grenier and Sissy Spacek. 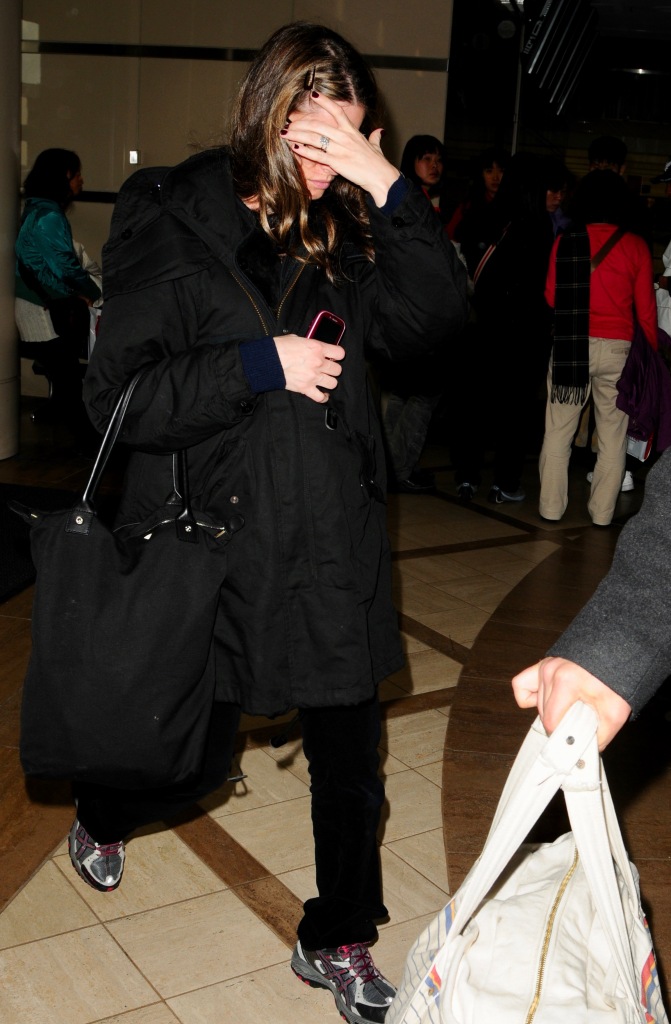 Yep. She covered her face. 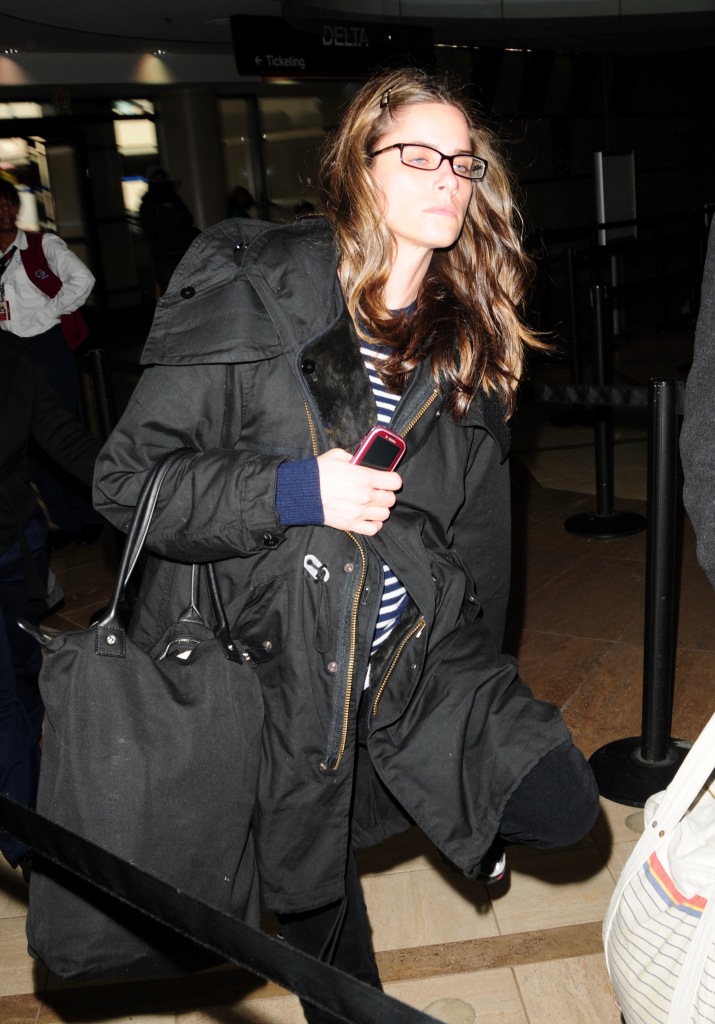 And this is a horribly overexposed picture.

I have way better pictures of her.

I remember a set where she didn’t even see me shooting and she was playing with her daughter (or son or whatever). A good 90 pics of her playing au nauterelle (not naked but like a normal human). It was on Air France, and she didn’t see me. When she did, she became a bitch. I’m not going to dig those photos up. She doesn’t deserve my precious Zelda time.

It’s funny that the pic is from 2010 and the phone that she is carrying looks like 1994. Technology is crazy.

So. Back to Zelda.

And this week I can’t just be a lazy fucker the whole time. I will work. I swear I’ll have 2 different articles written and sent by Wednesday. This is getting ridiculous. Just writing in my shitty blog and ignoring what actually pays me. I just fantasize about work and never do shit.

I just got an email about a Tijuana Adventure bachelor party for August. That’s a long time from now. I’m horrible at business.