There is no pay request.

I feel worthless/useless. And a tad sick.

I have no desire to work.

And I haven’t been at all.

I sent a reminder that I have two stories pending that they already paid. But no pay request. Because Zelda has been rendering me useless.

At least I made good money the past few weeks that I can pay bills, rent, and still live merrily drinking and eating with my girlfriend for another while.

All I want to do is play Zelda. But I can’t be doing that forever.

I made it to Gerudo Valley. Link has to cross dress to make it there. 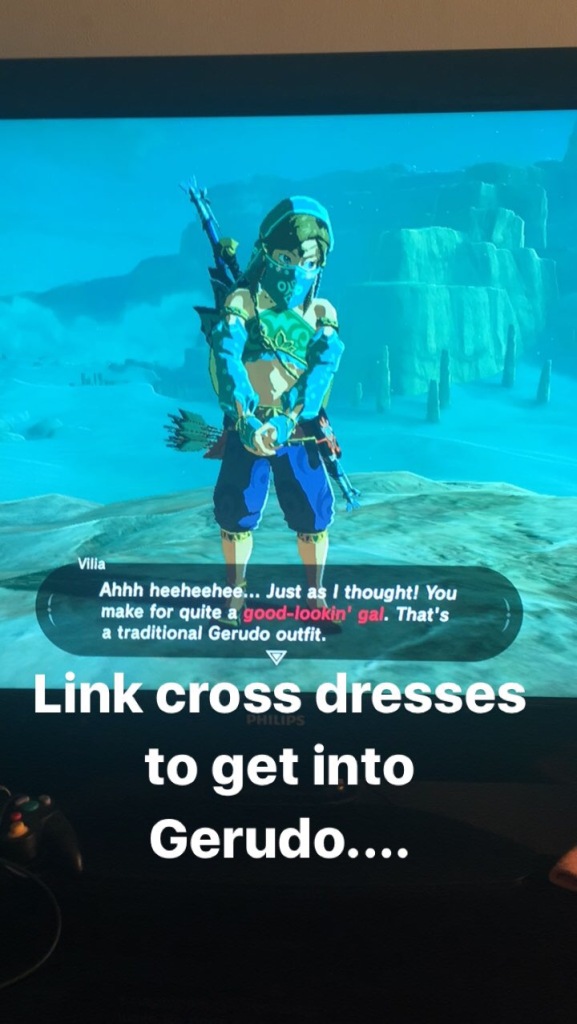 Mipha, the Zora Champion, is all about being in love with Link.

In Rito Village there is a compromised marriage that you need to fix.

A life of Zelda has made some of them riddles quite simple. It’s still insanely fun. And the map still feels gigantic. So many damn missions. Will it ever end?!

I have a thing for collecting almost everything that you can in all the Zelda’s I played. Down to the very last 1/4 heart that are hidden in extreme remote locations. Or the stupid big sword you get in Ocarina of Time.  Just googled it. It’s called Biggoron’s Sword. And this is all the stupid shit you have to do to get it. LINK!

My girlfriend made me a portobello with beans and cheese torta yesterday.

It was really good.

But I didn’t finish it.

She got mad/sad at me for not eating.

And I really liked it.

I’m going to have it for late breakfast as soon as I am done with this.

She also didn’t like the new Dave Chapelle special on Netflix.

Given, she doesn’t even know who Chapelle is. And that’s a big one. For a stand-up comedy fan not to know Dave Chapelle…. sigh.

I liked the new special. It’s not insanely funny like older Chapelle. Or maybe comedy has changed. But it has a lot of insight. And after not being around for almost a decade, it’s good to see Dave back.

I hung out with Dave for a brief minute long time ago.

The guy I worked with at LAX as paparazzi told me he saw him all the time but never shot him. Because it never sold. And because Dave is a chill guy.

So one time Dave was just hanging out in Tom Bradley international smoking a cigarette and I was with my buddy. He just straight up told me, “let’s go talk to him.”

We just went up to Dave who was sitting on a planter by himself and they had a cigarette together. I didn’t say much at all, just that I was a fan. Since I don’t smoke and seemed nervous, I was just kinda there on the side. They just chatted about life while they smoked. Yes. As in life in general. My buddy told him about his wife, Dave talked about his. It was the most casual conversation. Dave seemed tired. But he was chill. It was brief. Just one cigarette and then said he had to go.

We didn’t take his picture.

I uhhh…. should work.

I treat this blog as work though I know it’s not. This is pointless and I say it in almost every post.

It’s funny that people read me though.

Maybe someday it will become something not pointless. It would be nice to adventure every day and write about it every morning and get paid for it. But nope. I just sit at home and play Zelda so there is not much to talk about except Zelda.

And the toilet is broken.

After fixing the sink and fixing the toilet cap thingy…. Now the tank leaks.

I don’t even understand how it’s happening. It’s like if the tank had a tiny puncture making it leak slowly. But I don’t see anything. Just the droplet landing on the floor every few seconds. Making a puddle on the bathroom floor.

Roommate came home just to leave. He is going on a camping birthday surprise trip with Stu. I’m a bit jealous. I wanted to go camping.

Maybe this weekend, on a Saturday I might be able too, with my girlfriend. Glamping in Valle.

I know I’m busy on Friday, which might alter the whole weekend.

And I’ve been emailing for press passes and extra tickets to make it a San Diego Reader party at the stadium. No response so far, but I have a friend on the inside that told me that they will respond soon. So it should all be good.

And I also have to take care of some stuff about Tacotopia. Which is in a month and a half.

And so is my birthday.

And I’ll I want to do is play Zelda.

Little me would be proud.

Little me didn’t understand why adults didn’t like video games.

Little me and I would get along.

I turned out a bit to what I pictured. Sort of.

I am somewhat free. I do what I want. I play Zelda all day. And I have a triforce tattoo.

I also have a fantastic fucking awesome girlfriend.

And for some reason, she likes me a lot. I don’t get it.

Sometimes when we fight or when I feel like I made her either sad or mad… I got to remind myself “don’t be a dick, this is the best relationship you ever had, you love her, and she’s amazing. Don’t lose her.”

For the first time in our almost two months together, she saw how hot-headed I truly am. I told her since the beginning that I lash out at people for stupid nonsense.

My friends sort of know this. My family knows this. Talking to me is like walking on egg shells.

I fucking hate everyone.

And I need time to cool off.