I actually wanted to write things and stuff about stuff and things.

But I woke up a bit late and I had a tour at noon. At around 11 am my client told me they were already getting in the Ubers.

I thought I was going to be late for that, so I ran to the border.

It was a great tour. I don’t know if I’m lucky or life is just good with me sometimes. It’s quite good.

I’m trying to remember what happened Friday night, but all that I remember is that I hung out with my friend Bryan at my place. And I played Zelda while he watched. And I tamed a wild horse. The strongest horse I found so far. It’s a black horse, so Bryan chose the name Blak Dude. Creative.

He thinks it’s weird that I talk a lot about personal shit here. Like my finances. And this is what I’m talking about being lucky. I thought I was going to be broke soon, but a tour comes and saves me, and it makes finances alright. I have rent money and more. Beer money. Food money. That’s what most my money goes too.

I should get a car. I should start saving money.

For now, it’s still survival money. I don’t know if I will ever make money like when I was a paparazzo. But maybe. Maybe I will. It wasn’t that much after all. And I’m getting old.

Oh yeah. My cover story is still out. There is one weird comment in there now.

Let’s see if any letters arrive about it.

I remember I met my girlfriend where always, and that we had Mamut beers. But I don’t remember what we did about food….

Like always. Girlfriend wanted the ahi tuna tostada. Bryan joined us sans his girlfriend. We watched the Mexico vs Costa Rica game there. Good game.

Then we bought a growler of Double IPA at Mamut and came home. Girlfriend fell asleep as soon as we got home. And I played Zelda while drinking beers with Bryan and discussing life and shit.

I think this is one of those shitty ones.

This was my tour.

Those turn into insanity.

Nothing will ever outdo the partying I did with the two South Africans, but this bachelor party also got pretty fucking wild.

That’s my job I guess.

To get fucking wild.

Like always. I didn’t know what to expect. All I knew was it was a bachelor party, the bachelor had some special requests and that dude that emailed me was Chinese. They were all a bunch of cool guys. Almost all of them went to Pepperdine University. I wanted to go that University. I applied and got in. But no money for it. Mother fucking campus is in Malibu. Shit is so fucking expensive… There was no way I could ever afford it.

We started at Nelson Bar because that’s always a good pit stop after the long walk from the border. First round of beers on me. From there to Norte, because views and beers. This is where I think I won some of the ones that had doubts about my abilities as a tour guide. One of them said that they would have never found this place, and they were loving all of it.

And then to Teorema/Lúdica tap room for even more beers!

And again, one of them who was having Tijuana doubts, had coffee from the shop next to Teorema and he loved it. He started to believe in Tijuana.

The gang was hungry. And though the bachelor requested Teléfonica, I had to take them to KoMe Korean tacos. And we snuck beers into the restaurant and continued the party.

It was one huge ass fucking party.

The bachelor was drinking fast. He was trying to speak Spanish and he sang Mana’s “Rayando el Sol” at the restaurant. It was hilarious. It was only 4:30 pm.

And we did go to Teléfonica after the Korean tacos. Place was packed. The group split into two, and we merrily ate and drank more. And drank. And drank. 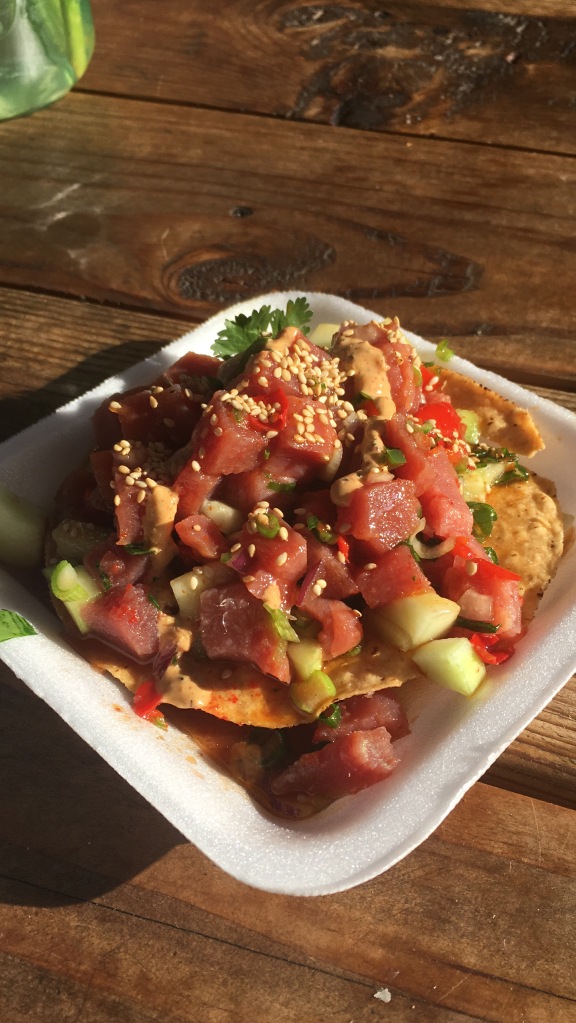 I got the tuna tostada from Otto’s grill just to send the picture to my girlfriend and let her know everything was going awesomely.

And that though the bachelor had requested no strip clubs… it was the consensus of the party that yes strip clubs.

We ubered back to Nelson. Made our way to Zona Norte. And into the legendary Hong Kong.

The adventures that go in there, are not for sharing. At least not in this blog.

But it was insanity.

I actually for the first time in my tours… LOST A GUY!

The group split for the second time here.

One group handled the bachelor that was stumbling all over the place. And I took them all to the border.

The other half of the group stayed behind looking for the one guy that went missing. Apparently, they found him at the bar later as if nothing had happened. And he ended up staying extra hours even after his other group abandoned him.

And there I was.

And for the first time in a serious relationship.

But hey baby, it’s my job to show the guys a good time.

So I did partake in the bachelor animalistic and misogynistic non-sense that us humans and society do. Yep. Bachelor parties.

I just partook a little. A girl in a white sheer thing with purple hair was hypnotizing me.

Damn women. I like them so much. But I have a good thing going. A great thing going. I’m in love. As cheesy as that fucking sounds.

So to try to ignore all the naked women surrounding me. I played Pokémon Go… at the strip club. I shit you not, I caught a new Pokémon I haven’t seen before (Skarmory).

I mean… I also took care of the bachelor party the best I could. Everyone was in different places. I was just in charge of the big table we got and made sure none of their shit got stolen (they left sunglasses, clothes, and even a wallet).

Okay. Goddamn. That was one crazy ass bachelor party.

And it ended at 8:00 pm. 8 hours of crazy drinking and Tijuana Adventuring.

And I wasn’t done with the drinking and the Tijuana.

It was still Saturday and my girlfriend wanted to go out.

So after all of that, I still met up with her and went out with her and her friends… and again to Teléfonica we go.

I was drunk as fuck. And coming out from a crazy bachelor party.

But somehow I have the strange superpower of looking and acting sober even when shitfaced.

And I couldn’t stop drinking. So I drank more and more beers. This time with her.

Came home and drunkenly started to play youtube videos of music that I like until we passed out.

Woke up early and without a hangover.

We went to have breakfast in a place inside the sobre ruedas of Zona Norte. We discovered that, besides serving quesadillas, they also do gorditas. That thing above is a gordita de huitlacoche. Fucking delicious.

It’s Sunday of being with my girlfriend except she hates how I don’t have pants that don’t have holes in them.

She wants to go somewhere new to eat…

Oh yeah. She got a new backpack. It was 80 pesos. It’s such a shitty backpack. It even had a warning from the state of California that the backpack was made with hazardous materials that could cause cancer. Like… wtf?! What backpack is made with cancer materials?

But she liked it.

So she got a new shitty backpack that will probably break in less than 3 months.

And so continues the crazy life. And the moot daily word vomit.

I want to use the word moot more.