License is Here – Nothing to Pitch – Depression, Cover Story, and a Girlfriend

I’ve been waking up late.

And then I get depressed. 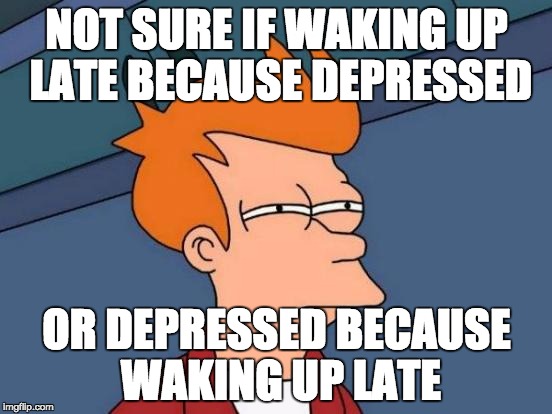 There. I made a meme about it.

In reality, its lack of work.

Because life is good. I have an amazing girlfriend that I love. Who is at work right now.

Roommate is also cool. He will be home for the first time in a month tonight.

Money is okay for now.

My license is in the mail and I should get it soon.

I should get the new Zelda for the Wii U to be happy.

It’s just waking up and not being sure what to do.

And I have nothing to pitch.

I have to take care of the pictures for the cover story. Okay. Have around 2 weeks for that. And it’s just pictures. That I’m not getting paid for….

I have two stories that I pitched and are quasi-accepted. So I should do both. Haitians are in my mind. So I should write about the Haitians. Editor asked for something specific, and I was going to go the whole other way with it. So that’s why I need a backup publisher. Because I know what I want to write it’s great, but not that the editor might need now.

I’ll start working on that next.

The other was for a feature or cover story, but the story has been covered, and it’s not that exciting anymore. I should also just work on it. I mean. Both stories got quasi-accepted on the pitch.

And I have nothing else to pitch.

Murders are up in Tijuana. The dollar is going down. I could create a list of shit to do in the city. It all just started to feel the same. And in San Diego… I have no idea what is going on in San Diego. Except I got my license.

I ate a bag of Doritos nachos chips with Panela and Monterey cheese in bed last night. Yep. A bowl of that. In the microwave for less than half a minute. That was my dinner.

Girlfriend was already asleep. And when I woke up she was already gone. I’ve been acting weird, and it’s my fault. She’s been acting awesome and gives me so much love. I just feel stuck.

This happens to me when I have a cover story coming out. I’m just really waiting for it to come out. See the reactions. Live the moment. AND THEN finally let go of it. Forget about it. On to the next.

Getting a cover story is like reaching the front page of Reddit. It’s a thrill. It’s just fun. I’m not doing it for the attention (probably subconsciously). It’s just a thrill that pays me. But I want it to be over already…

This was my last cover story by the way. The Spanglish one. Next one carries a similar sentiment. And I’m really nervous about it. The few people who have read it really liked it. And I mean… the editor chose it for a cover story. That should be enough to warrant me the feel that “it’s a good article.” But nope. I am still nervous about it and can’t wait for it to be fucking over.

I should have the same attitude about the story. But I don’t.

Yeah. It’s silly for me to feel depressed. It’s more about feeling overwhelmed.

This will be my 3rd cover (4th if you count a picture). And it’s for the same San Diego alt-weekly. A lot of people read it. But I wonder how the fuckers in the higher ups feel. Those getting the cover story in the New Yorker.

Then I also think how them fuckers at smaller mags from smaller cities feel. Like the ones writing for City Pages in Minneapolis (what a shit mag). Westword for Denver was a really cool mag. Both are smaller cities. And I bet people getting the cover for those feel great.

Let us (me) not forget that my pictures have appeared worldwide when I was in Los Angeles. HAH! That shit was silly. From ages 20 to 25 I was a paparazzi. Getting the cover there or a picture there was way less important. No one knows who the photographer is unless you read the TINY TINY TINY TINY fucking print inside the magazines. YES. It gives credit. It’s BEYOND TINY.

This world is silly.

Talking about my own depression made me feel better.

It’s more than anything, I’m not sure what to work on, and my girlfriend is slaying at work.

I had that sandwich yesterday. It wasn’t very good. And the dude took like 18 minutes to make it. But it was 50 PESOS. FUCKING 50 pesos. That’s less than $3 for a big sandwich.

It was composed of shitty carne asada, mushrooms, some cheddar cheese that had no flavor, and chiles that barely made a presence. I tasted some mustard, but it could have been my imagination because that sandwich needed some fucking mustard. Just read the ingredients. It did have mustard. Some more and some kick to the chiles would make this a better sandwich.

The place is called Anthony’s Sandwiches. It just opened. And you can tell they were not even ready to open. The menu has silly names for the sandwiches. I got the “Wacha.”

You know what. Fuck it. I’m going again today and trying a different sandwich. I said it wasn’t very good, but it wasn’t bad. And I should start writing about food again. But when I think about that editor…. *shudders*…

This review would be a fun review.

I’m already having fun writing a review in my head.

I wish there was a Caffrey’s here. Yep. My wishes are fucking crazy. I want a Minnesotan specialty sub sandwich in Tijuana. This place was so good. And I love the crazy after party ambiance they had. I would eat there again and again.

And I’m still playing that Leo Brouwer song. I am doing that ALL the time now! Still, the same one page+ I have memorized. It’s going smoothly, except a slow melody part that makes me stutter. I should memorize the second page today.

In moments like this when I feel stuck. I have Nelson. I would just be there drinking. Moving time forward. Until the time is done and I can start on my next story. But now with a girlfriend, I feel stuck. I don’t like drinking without her. If she’s at work, I should be doing work. But RAHHHHHHH. I’m a freelance, and I can do whatever the fuck I want when I want.

So I’m going to shower, do push-ups, have breakfast, play Pokémon Go, and start getting drunk.

Sorry baby. I love you.