I have to go to the DMV.

As in soon. Shower. No push-ups. No breakfast. Some coffee. And I am out.

I had a great day yesterday. I was working, when I decided fuck it, I’m going to walk around for some Pokémon. Tired of being inside the house.

After just a short walk and some gym battles, I came home to a disarray of good news. Right and left good news. Good news here. Good news there. Everything that I had planned that wasn’t sure was falling into place. When I feel my work goes unnoticed, suddenly in less than an hour, it gets rewarded.

So I have no worries for the rest of the week. Except I have to finish an article. And start working on what is going to happen next after I finish that article.

She didn’t have a great day though. Her day was sort of shitty. Well… anything work related with her is shitty. Her job is shitty. Her boss is the devil incarnate. Very demanding. And not that well paid. But she does it because she wants a challenging job. And she does a job to stay with me.

After I met her at our usual spot when she was done with work, we were going to have dinner. But it was more like her having dinner with her iPhone while she handled her boss.

It wasn’t that bad. But her boss was texting her stuff non-stop. Stuff that she could have done in the office. Dinner interrupted, over and over again. And she stressed out.

We had to come home earlier than when I wanted because she had to do some work for her boss. Stressing out a lot.

So it’s like she didn’t even leave work until 9 pm.

And after that, she didn’t want to go anywhere. I insisted. And I’m glad I did.

We went to grab a couple of pints because TAP TUESDAY and we both fell better.

That’s when the double cuddles come in.

Couldn’t even fucking move because I didn’t want to wake up either of them.

But I had to go the bathroom.

Sorry Bisho. I had to move you.

Here’s a picture of Bisho I was going to edit and post but then never did because it’s not that great of a picture but this blog needs a picture: 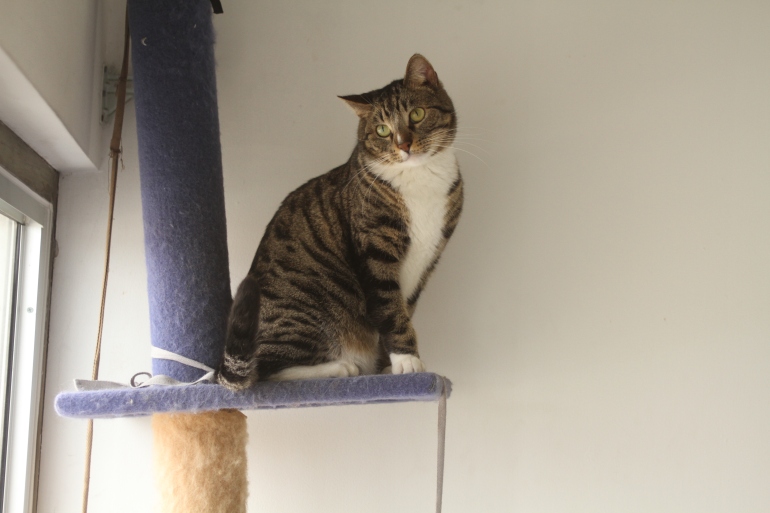 And of course in the morning she woke up early and didn’t let me sleep because she’s annoying. And I can’t oversleep today because well… DMV time.

Shower, no breakfast, no push-ups, coffee, cross the border.

I don’t think I have crossed the border since Trump has been in place.

But here I go.

I did the practice tests.

If I fail. Then it will be another DMV time some other time.

Fucking leap year kid. Point is. He has his birthday either the 28th or the 1st. Leap year kids.

Dinner with the family later tonight.

One of the good news I got yesterday was that I hooked up my brother with a big job. Yep.

And many other little good news.

I thought the editor was going to send me an angry email, it was the opposite.

I still have 8 more minutes.

It seriously gets easier and easier to word vomit almost 1000 words a day.

But look at me go!

I keep filling this thing in until I see the word count hit 1000 or more.

Speaking about how I can word vomit forever.

Do I have too?

Ahhh.. It’s a picture of a dead soldier.

Let’s look at this dude’s profile.

Ohh.. he has been posting the same picture of the same soldier in various subreddits including the_donald.

And people are giving him karma. His titles aren’t even creative. They basically say “this dude died and he was a soldier, upvote me.”

Oh god. Yesterday Trump gave a speech. I forgot about that.

No time to catch up on it today though. Gotta go to the DMV.

And I only have 5 more minutes.

Imma gunna have some of that disgusting Jack in the Box breakfast.

Most likely extreme sausage #22 yo!

Then probably some other fast food for lunch. Maybe In N Out.

That’s what I do when I go to San Diego. Eat shitty food. Nice food is expensive. I can afford it now that I had a great week. But still. There is no reason for it today. Just DMV. Shitty food. Come back.