That was my first attempt at a Little Planet photo.

I photoshopped a different one first while waiting to transfer this. The other attempt was too horrible that I don’t even consider it an attempt.

This one was also not perfect.

I dislike how it doesn’t end in a perfect circle. So I will make another attempt at a different location.

If you are wondering how to do it. Google it. Seriously. Just google little planet photography and there are other people who have written about it and done a better job describing what to do.

That’s what I did.

Fuck. You can learn almost anything by googling shit.

Don’t want to google shit and keep on reading?

First. You take a panorama picture. The more you cover the better. So 360° is better.

Holy shit. I completely guessed where the ° was and I was right! Sidenote, to type that on a mac it’s shift + option + 8 and TADA! °°°° Degree symbol mothafuckas! °_°

Second. You go on Photoshop and click “little planet.” DONE!

I’m kidding. You got to square the picture. Let it deform. Do not correct.

Third. Flip that fucker upside down.

Fourth. Go to distort, hit polarize, move the scrolly thing until what looks goody to you, and TADA motherfucker! Little planet picture.

Now go do it kids.

I also did other fuckery with levels and what not. You know. Google. Play with shit.

If you were wondering. This is what the image looked like originally in my iPhone.

I need to buy an extra battery for that fucker, because between Pokémon Go and taking pictures, I drain that fucker in less than 5 hours.

I woke up extra sweary today.

I guess because it’s fucking Friday!!!

Finally sent that bus article yesterday. Hope they publish today or this weekend. Here are the pictures I took:

Text explains more of the whole bus experience. Tl;dr = it was pretty good. Pointless, but pretty good. Nice tour of the city.

I also started transcribing my friend’s story. I did 5 minutes of transcribing (a page and a half) when I got distracted and saw that there weren’t many clouds in the sky so I could do little planet photography.

By the way! It’s better to have clear skies than a cloudy day for little planet stuff.

I have to finish that transcription soon and start working on the story.

Finish it this weekend.

And weekends sort of start to mean weekends now. Especially Sundays. Because it’s the only day my girlfriend gets the whole day off. She has to work half-days on Saturdays :(

So Saturdays are also kinda the weekend.

We’re already like an old couple that has been dating for ages. Not in a bad way. In a good way. In a great way.

We come home, we watch Netflix, sleep early, and go to work.

We are watching Black Mirror. Show is great. But episode 1 for season 2 wasn’t that great for me. Episode 1 season 1 is still my favorite one. This one felt like it dragged a bit too long. It was very well acted. But… I don’t know. She fell for the trap too soon (you got to watch it). And she is unseemly rich out of nowhere. She can afford super insane advanced technology with no questions asked. If she can afford the technology, it would mean shit tons of people could too. And it would mean the whole world was occupied by these robots everywhere. But it makes it seem like she is the only one that can access this is insane technology that is expensive but apparently she can afford it no questions asked.

Fuck. Okay maybe it is in a bad way that we’re old. But we have plans for fun stuff! At least the little hours we have together. And weekends. Too bad I work some weekends… Ahhh relationships! We’ll figure it out.

Before Netflix and sleep.

I saw her where I usually see her when she gets off work, by her taxi. Well kinda. I was a bit late and had to stop by the bank. She bumped into a friend of mine, then they walked towards where I was.

Another friend invited me (us) to eat at where he used to be the chef.

Victor ‘Brown’ Rangel was the original chef from Bresca. When it opened, that cafe was awesome (the coffee was okay, but the food was great). With time, it turned the other way around, the coffee got good, but the food got real bad (overpriced and really meh!).

Well Mr. Brown is back to try to revive the food scene in the coffee shop. So he invited me (us) to munch on pork between breads.

This was mine. I accompanied with a Perro del Mar IPA by Wendlandt.

Gf thinks the photo looks to pornographic. That’s the point of the #foodporn hashtag. It’s like the sandwich spreading its legs to show the meaty inside. I either made that sandwich sound delicious or disgusting. Your pervy mind can decide.

My older brother is a fan of nudity. He shared the picture and wants that sandwich (all the way from Ibiza).

About the sandwich. Very tasty though slightly dry. A salsa that they brought us later it gave it a nice extra kick.

It was pulled pork with basically a bánh mì type topping. The bread wasn’t very bánh mì like, I liked it, soft and buttery, would be great for a burger or sloppy joe’s (or the sandwich I ate).

I actually wanted to it again right after. But it was a free sandwich, I wasn’t just going to ask for another. I should’ve and paid for it. But then I wouldn’t enjoy it as much (not because free, well maybe because free) but paid and get the same thing. No bueno. I also ate part of my girlfriend’s sandwich.

That was her vegan sandwich. It was composed of the same thing, except this one had big slices of sweet potato, beets, and apple instead of pulled pork. Then topped with the same bánh mì like thingy.

It was also a great sandwich. Albeit, a bit too sweet for my girlfriend. She likes her food extra spicy. The salsa they brought us was very good in the sandwich. Sliced jalapeños or banana peppers would have given it an awesome extra kick.

I bought her a Lupulosa IPA because I knew she likes em. 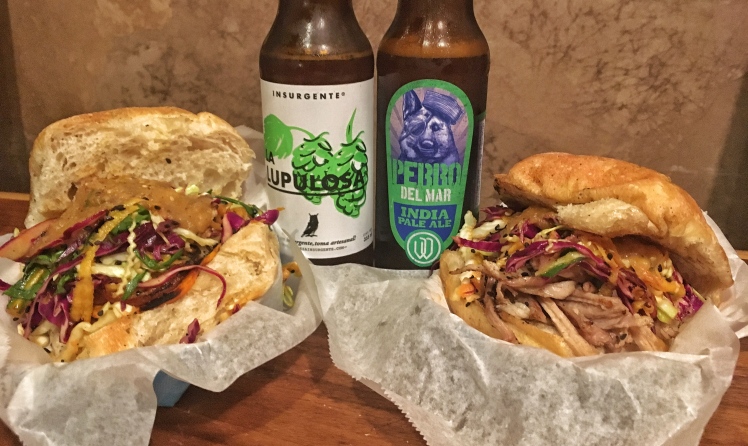 And that’s our sandwiches and beers together! (again she beat me and drank hers faster…)

And yes. I had a photoshoot with my food before eating it. I’m one of those fuckers. Get over it.

At least it wasn’t with the 7D and the massive Tokina 28-70mm/2.8f. It’s not massive massive. But pretty big to be hauling around for just food pics.

All photos were with iPhone.

That’s it you fuckers!

And it’s Friday! And I’m happy!

Kinda. Because I’m a bit broke. That will change in a week though (I’m hoping).