Thanks to everyone congratulating me and telling my girlfriend is beautiful.

I’m still in awe in how pretty she is. And how comfortable I am with her. With us. Seeing her every morning makes me really happy. Waiting for her to get off work is a pain though.

I finished work at around 3:30 pm yesterday.

Because I still have infinite work to do.

But finally. That long ass article is done and sent.

Only a few people have read it. My girlfriend, my mom, my roommate (who edited a bit), and a couple of friends. And my dentist. Because she is part of the story.

They all told me they liked it.

It took me months to write. I hope they take it. And as is. There will probably be more editing. But that took me so long. That’s the problem with the freelance world. I’m not even sure if they are going to pay me for it.

And I feel tired. Exhausted. Like I completed a massive work and now I get to rest. But it’s Thursday, she is going to work, and so should I.

I did some laundry yesterday. I’m not good at cleaning. Everything is dirty for her. So I’ll attempt to clean more. And do more laundry today. Since I’m the stay at home dad with Bisho and I work from my computer and she is of to work to be the high assistance supervisor of some fancy business thing in a fancy building place. She looks so pretty in her fancy business suit.

Her work even gave her a phone already, an iPhone 6. Basically my same phone, but slightly bigger. And I wanted to buy her a phone… Though it would have taken me forever. I don’t make much money. I should make more money.

After work and laundry, I went out for a burger and some beers and to wait for her. We had some more beers with my friends who were near her taxi stop, and then went home to Netflix. We were watching that new Netflix short movie “Girlfriend’s Day.” It was going good, but we got too sleepy. We sleep early in the weekdays now. That’s why I’m awake so early. That’s why my blog posts are done before 10 am.

Australian dude/model that came on a tour and his main mission was to get boots made in Tijuana, just asked me if I think Trump is going to get impeached.

These are the boots by the way… 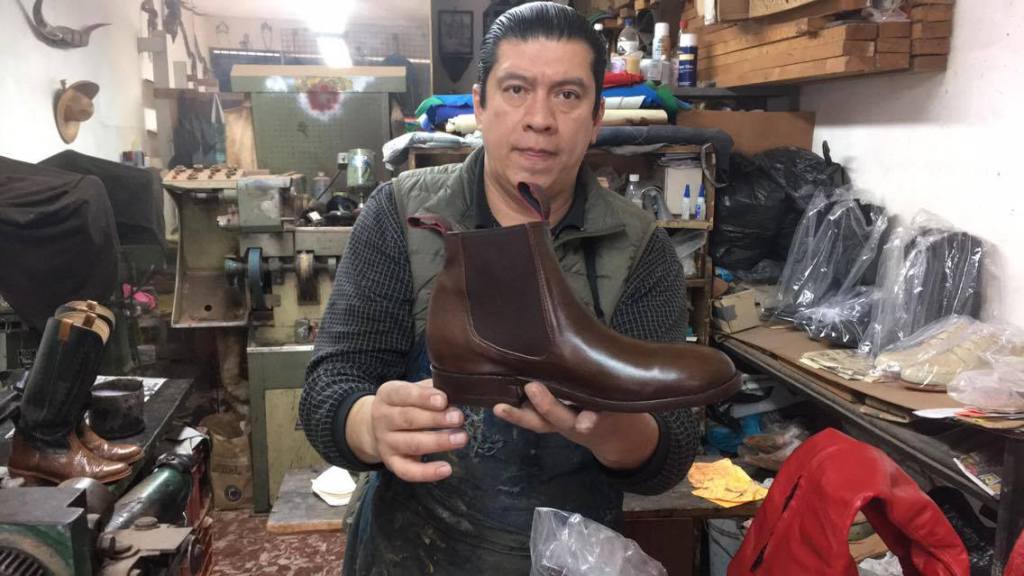 Apparently this guy is a boot making legend. And he is only a few blocks away from my house. Them boots were around $115 + shipping which he ended up paying around $200 or so. But the Aussie really wanted them boots. I hope they fit awesomely. It made me want to buy some nice boots/shoes. Definitely when I need something custom made that’s fancy, I will go to this guy. That boot looks cool as fuck, less heel because I’m already a tall motherfucker but…

Boot guy has nothing to do with Trump. But if you need nice custom made shoes… I know the guy (La Casa de la Avestruz).

Now. The Trump train for god emperor know it all is still going… somehow.

Somehow… I still don’t get it.

Trump supporters are still…. believing everything he says.

Fuck man… I’m still baffled by this. Why? Why would there be fake news?

Ohh… I know what your answer is.

“Libtards are mad because Hillary didn’t win so they are making up fake news to discredit Trump so…” … wait… wait… what?! Why?!

I still obsess over Trump and his supporters. I read Trump’s tweets way too often and go inside /r/the_donald to see what is going on. It’s such a strange parallel. And they still hold on to what little they have. They still think somehow at the end of this, Trump will show the world he is the awesome god emperor leader that he said he was.

Fuck man. That’s not what a leader looks like. Just fucking get your head out of your asses. And really think about it. Fuck. That’s way too much to ask.

OK. One thing Trumpsters (though I doubt anyone reads this non-sense). Just release his tax returns. Just that one thing. If there is nothing there. You win. Like you love to win. Winning is all that matters. I love to win too, I’m competetive as fuck. Gloating and saying fuck you to the rest is not the way to do it too. But seriously. Just the tax returns.

But even then… they will not be convinced.

Maybe they all really know Trump is the puppet and that the agenda going through with Bannon and the rest is exactly what they have hoped for. Most Trump supporters are either rich assholes who don’t give a fuck about killing anyone for money, or really ignorant bastards that are just happy to see that it’s not a black guy or a woman in the White House anymore.

And I’ll be called a libtard asshat like my roommate got called. I’m not even a complete liberal. Yep. My Peace Studies Bachelor degree might differ, but hey… at least in class I was the least liberal of them all. Except that weird dude that was way too religious and he took the class because he was forced too, not because he wanted. Almost all the rest were way too hippy (except a few friends). Teachers were also awesome.

Point is. I went to a liberal arts college, I’m a liberal per default, but not your average liberal.

Fuck… They made socialism into a dirty word. Liberal now carries that same connotation. Liberals are the enemy. YAY!

All opinions here are my own. I hope they don’t get me in trouble…

My latest sent article is all about the border lifestyle. 4,180 words and I didn’t mention Trump once. It’s not even about politics at all. I actually haven’t crossed the border since Trump is in office. I have too soon. But it sucks that my girlfriend got her visa taken away. Hopefully we can fix that soon.

She wakes up early. I wake up early. This blog gets done WAY before it used to get done. Now I have the rest of the day to… work?!

Keep writing. I guess that’s what I’ll do. Not here though. This word vomit is over for now.