I’m still recovering from this weekend.

Yesterday I barely moved from the couch. I pretty much couldn’t. Rain continues to fall. Rivers of caca are my streets. I don’t have nice boots to brave the rain. If I go out, it’s a guarantee I’ll get wet.

And I still feel somewhat hungover. I didn’t have much of a headache yesterday, but I do today. And my ankle hurts. My back hurts. And I hit my hand on the door like a stupid idiot and now it’s also swollen.

It was too much partying on Friday and Saturday.

Too much fucking partying.

The weather didn’t even affect the party at all. And it has been storming non-stop.

Nope. NFL all of yesterday. The teams that I wanted to win didn’t win.

I also watch a Gallos Blancos match. First one I watch this season because I’ve been busy. It was a horrible shitty soccer match. The slowest 0-0 game. And my team hasn’t scored yet in the three games this season. How great is that?!

I don’t comprehend how I am thirty. I’m still just a child. But I’m breaking. My body is breaking.

And I feel confused. I am doing nothing but somehow made more money this month than I had expected. And I still have two stories I’m working on.

I kinda stopped working on them. I just haven’t felt the inspiration. Like that’s needed. It’s usually money pressure. If I’m running out of money BAM! I get to work. But here I am with rent for next month already at the ready, and more than enough to keep on living the Tijuana life.

And here I am. Cheating.

I don’t like cheating. Always disliked cheat codes in video games. I always hated cheating in a board game of any sort.

I cheated on this blog. Though I make the rules. I have posted every single day except one.

And the push-ups. I haven’t been doing 100 a day at all. This weekend barely did any. If I had to average how many I’ve done a day this year it is probably around 70. So yep. Not that bad. And my word vomit keeps getting extra vomity.

I started writing everyday to keep my sanity. Now it feels like doing it everyday is my demise. Because I say I’m going to do things, and I don’t do them. I’m not even closed to getting my license. Much less start driving for Uber. Time just fucking happens. And there it is. Suddenly is the end of January. Well… LAST WEEK!

I wished I knew what I was doing.

I have the whole week to do whatever the fuck I want.

Problem is… I don’t know what I want!

I want some shrimp tacos right now. But the rain is a guarantee that Los Compadres is not there.

5 days to do nothing. Then I have a Tijuana Adventure at the end.

I’ve been drumming a bit.

Just to realize I suck at drumming.

And that I need a teacher to get better. Youtube tutorials for drumming were dumb. I need to find a good one. Jazz drumming would be fun. I should play more music. But again, I’ll probably end up doing nothing!

And the future is uncertain.

And I should stop starting paragraphs with the word and.

And I don’t care.

Andy should come hang out. He hasn’t in a while.

I remember seeing them together once. They were DRUNK AS FUCK. And it was like 11:30 am. They were coming from a New York flight I think. Both Busey kids.

My hard-drive says I saw Gary another time. I don’t really remember it.

ANDDDD I’m lying. I didn’t even plug in my hard-drive. I’m too lazy to edit all that. It’s funny how I feel like I’ll never run out of paparazzi stories. But the more time passes, the more I forget who I shot and what my experience was. At least photographs don’t lie.

The first set is from January 7, 2010. It was just Gary Busey. It seemed like a funny shoot, but I have no memory of it.

He didn’t even look at me, but gave me a thumbs up (the few previous pics before this were pretty meh). 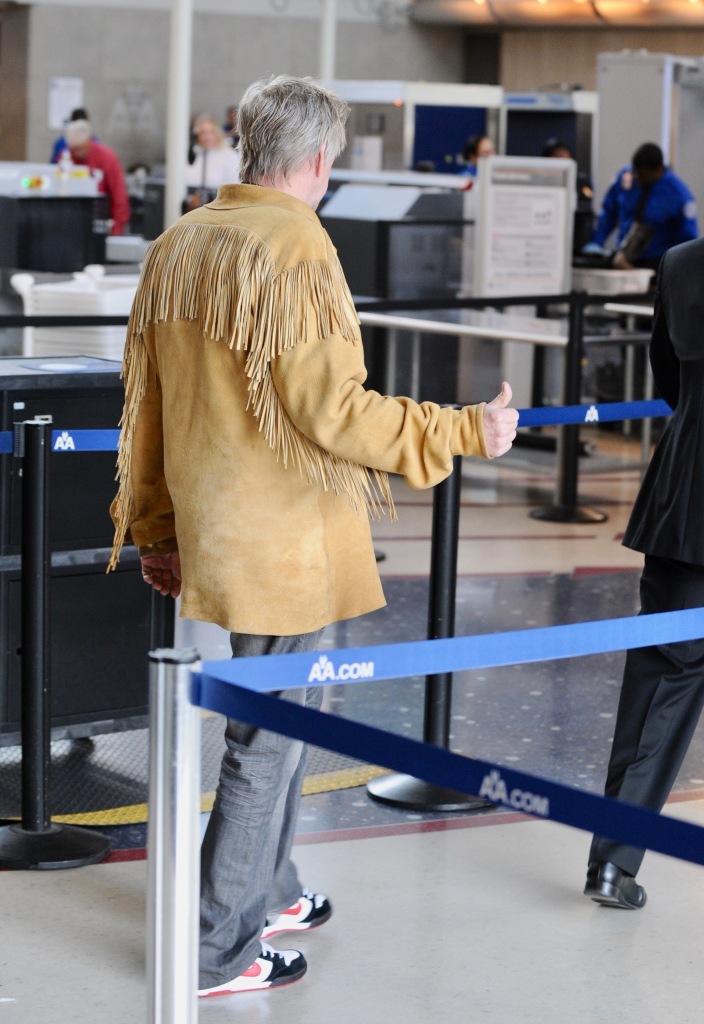 But my friend was there with the camcorder so we can have more material. He was usually doing video because I disliked it quite a bit. I still dislike conducting interviews. Shitty that it’s the only thing I know how to do and pretty much my life depends on it. 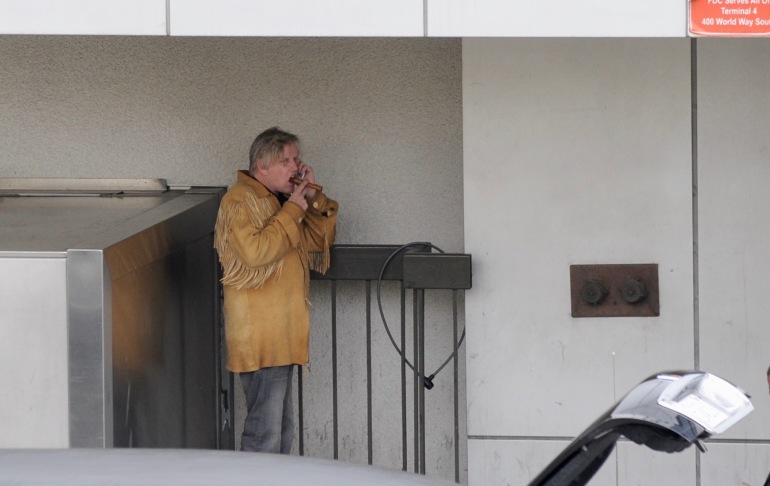 And then I went back?!! Some pictures from the parking lot show cops talking to Gary, so must likely I ran back because of that. 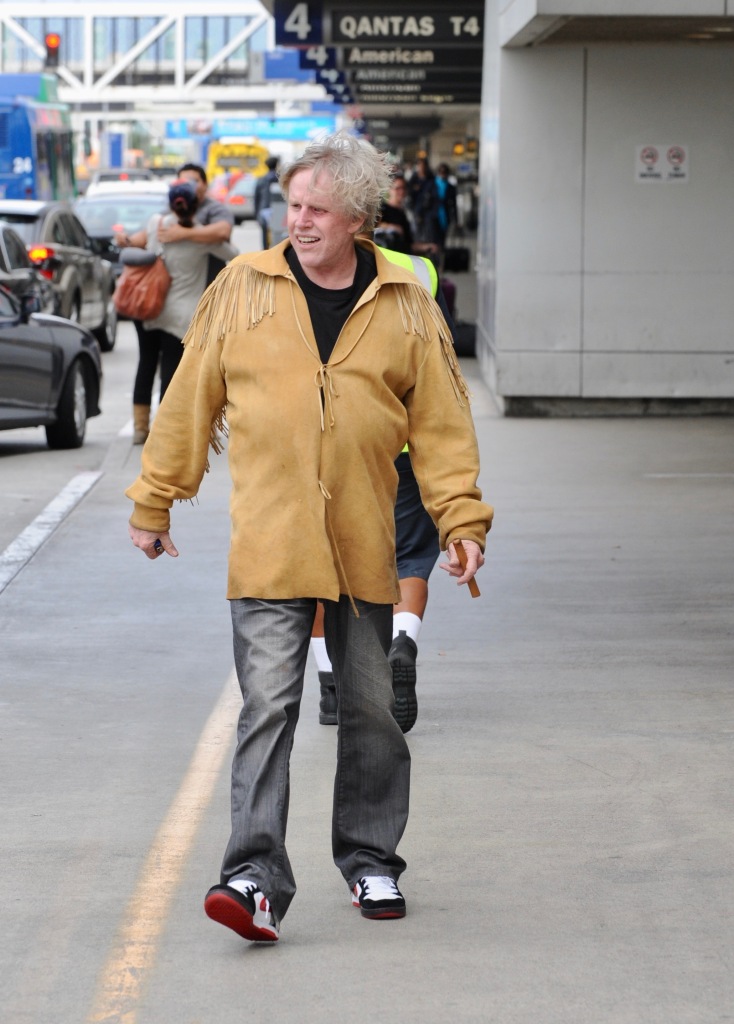 This one I remember.

Because it was hilarious.

And you can smell the alcohol on both their breathes from a few feet away.

Again, split between stills and video.

Looking at some pics… I wasn’t that great of a shooter… I guess my heart wasn’t in it anymore. But for a Nikon D3 I could have done better. LAX has horrible light downstairs, so that’s my excuse.

But see… even my flashing is shitty. Here’s my other excuse. I had a D300 with a really shitty kit lens. Also, flashing white people in a dark scenario makes it overexposed unless you know how to meter the flash and fuck with it properly. Hint. I don’t. I still don’t. Flashing is hard y’all.

I don’t remember what they were saying. But we talked to them for like 20 minutes. Even when we were done taking pictures and video, they just wanted to keep on talking. So talking we did. They were so drunk.

I didn’t give a fuck about Gary. But I remember telling Jake that Starship Troopers was one of my favorite movies as a kid. I’m pretty sure it was one of my first movies ever where I got to see a naked lady.

Hopefully I don’t end up as crazy as these dudes.

Now I get to do…. what?! I already have all the material for my next two stories. I just need to write it. But I’ll just sit here and look at the rain and think about food.