The grumpiness got the best of me. I started fighting with everyone, blocking, and deleting people.

I am always saying I need a vacation, but that’s not going to happen any time soon (or is it…?) A friend invited me on a road trip, but not about timeline. But it might be done.

What I really needed a vacation was from my own ego and narcissism that is easily provided by Facebook. And it’s not my own. Everyone on Facebook plays a character for likes and a lot of people simply shitpost.

This is how Facebook feels most of the time. And I’m not going to be a hypocrite. I do the same thing. I create events and send invited and take pictures of my food. But the thing is, I try to tailor my posts and only invite people to events that I know they would like. I don’t spam post. I don’t shit post.

My dad says he uses Facebook to work… and he does. I do as well. And so does my brother (who handles social media for a company). But the thing is, there is much more to internet than just Facebook. Yes. I spamwhore all my articles (or this blog), but other than that, most my posts are x-posts from Instagram. Every once in a while I have a witty comment/showerthought that I want to post, but I don’t…

Quitting Facebook was a bit odd. The first two days I kept checking my phone/iPad for notifications. Then I stopped worrying about it and I felt better. Less stressed out. Less worried about shit I shouldn’t be worried. And with much more time in my hands. I realized how much time is wasted just checking notifications on Fb. I rarely go through my newsfeed, but when I do, I feel the urge to comment on shit I shouldn’t  comment. That’s what I gotta stop doing. Also. Deleting all sorts of notifications. If I want to go to your event, I’ll look it up.

I used softer drugs (social media) to help me wane out. I’m an Instagram addict, so I used a lot of that. Also, obviously, a lot of Reddit and Imgur. Twitter I still can’t do much with. Many years on that, rarely post, still don’t get followers.

Overall, I feel way better without Facebook, but I do need it. There was more than a couple of occasions that I needed to contact someone, opened my phone, and realized FB is not there and I can’t message the dude. The other good thing I realized was that friends who are friends, actually called or email. People that really want to contact me have my phone and email. Same with people I want to contact. But there are so many other casual people on FB that I have no idea what their number or email is. So FB is just a large collection of contacts that I might need at some point.

But a lot of people simply just shitpost/repost all day. Something very frowned upon in other places on the internet. How to know you are shitposting:

– U kaN’t sPell Sh1t korrecktly and type like that (I can’t do it for very long).

– You are sharing shit from 9gag or other content stealing page.

– You are complaining constantly about your personal problems or other shit.

– You are posting a lot of shit in a row. Minute after minute. Posting your shit.

– You shared a picture you took that is potato quality.

If Facebook worked like Reddit, shitposting would be so limited. Alas, it is not, and it will never be like that. FB is losing popularity (at least with me), but I do need it for work and for whoring my articles. So I’m going to go back at it after this blog post (and whore this!) But more than anything, I’m going back to use it as a messenger. Tired of shit posting, so deleting all notifications (that can be done, right?) Also saw that there’s an option for FB messenger only. No more posting. That sounds interesting as well.

Enough with the FB rant though. It’s time to reactivate and join this social media that plagued the world.

Now about last week. Like every week, I say I had a wild crazy week. And I did. I also had a shit ton of work (another reason I deleted FB).

Tuesday I went to Balboa Park to interview Chet Harrison. A very good guitarist and very interesting (and super likable) character. It was good interview, it was good times, there were a lot of people playing Pokemon Go.

Seriously. Chet is a very nice guy. A gentle soul. I’m still working on the article, but I have more than 50% done (and I already got paid for it). SO I NEED TO FINISH IT SOON.

That night, I went out for Tap Tuesday and this is when I started getting frustrated with Facebook that I said FUCK IT DELETING THIS SHIT.

Wednesday my feature story about electric shocks vendor was published: 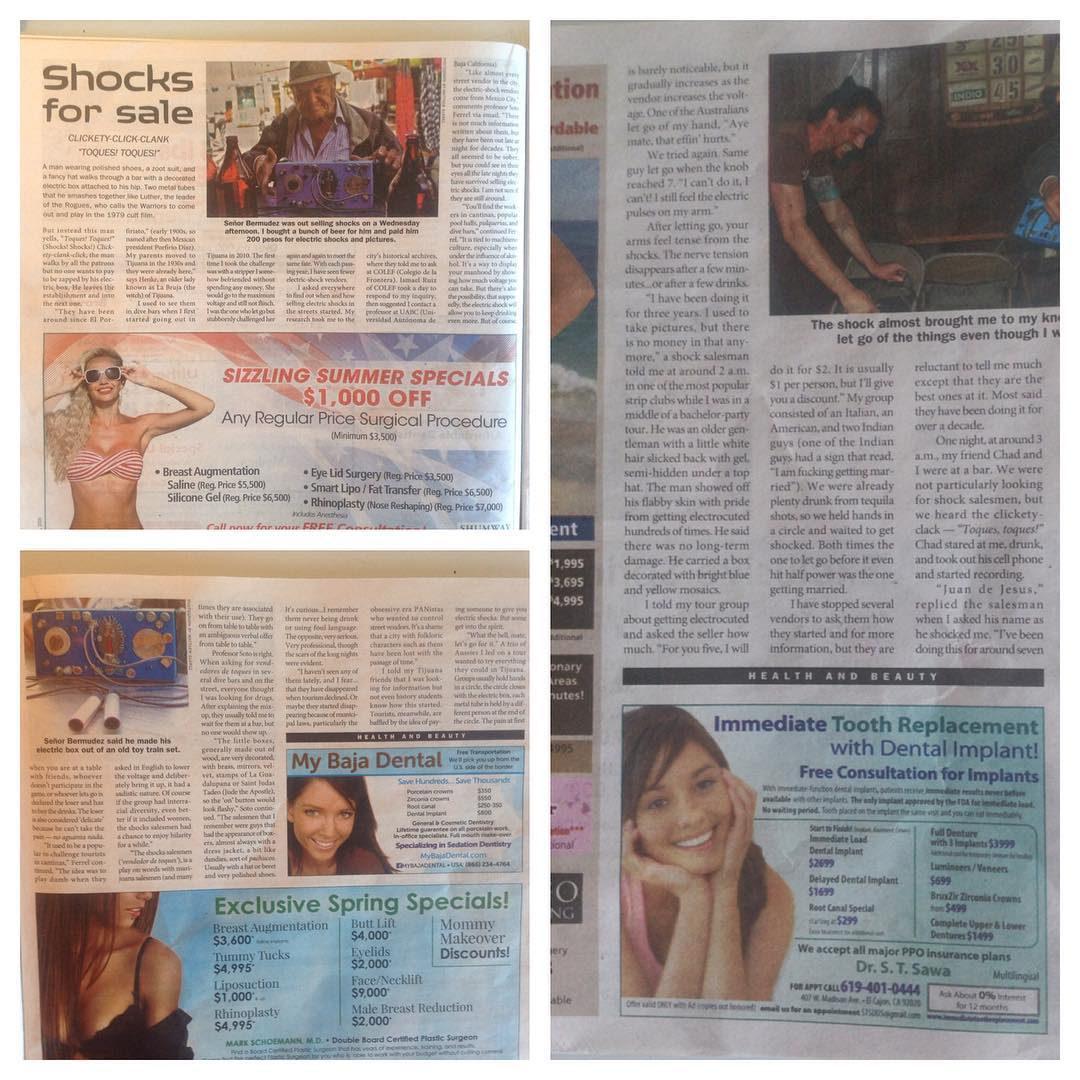 I also x-posted this to Imgur and Reddit and it was actually quite well received (didn’t expect that). Here’s THE LINK to the story.

That Wednesday is when I woke up and realized I had no FB to whore my story out. I don’t remember much of that day, but I knew my roommate got home (he is barely here). So I did a bunch of work and went out drinking.

Thursday was a similar pace. And that day I realized that FB is not really that big of a distraction since I Reddit a lot still. I started at blank document for hours, typing stuff, then deleting it. Not finding what I wanted. I ended up going to Norte Brewing with my roommate to work from there. I progressed way more in the 2 hours I was at the brewery than the 6 hours I was at home just staring at my computer.

Friday was on a similar note. Couldn’t do any work from home, so I went to Norte really early and started work. It was much faster and the story is more than 50% done. Now I only have to transcribe some shit, inject a few paragraphs, and do the final edit. So I will send the story in time! I also have another story to work on…

That night I just played videogames. I downloaded Mario Kart SNES on the virtual console on an impulse midnight buy. It was a good decision. It was also around midnight when a friend called me and told me he was picking me up to play soccer on Saturday morning.

Saturday I woke up at 8 am to go play soccer. I almost skipped it. I haven’t played any sports the whole 2016. I played good. Way better than I expected for not playing in forever. But I pushed my limits. I ran way too much and did way more than my body could handle. I went home and tried to take a nap because I had a tour bachelor party with Tijuana Adventure that same day.

Oh fuck. Couldn’t nap. Like all my tours, before they start I feel weird about it and I don’t want to do them. But at 4:30 pm I head out to ORYX fancy restaurant to meet the 11 guys I was going to take around town. What can I say… IT WAS FANTASTIC!! We covered a lot of ground, drank a lot of beer/cocktails, and of course had bachelor party fun.

I just can’t do that many bachelor parties a year. They kill me. I got home at 7 a.m….

Sunday I slept all day and when I awake, I was watching EVO. My whole body ached. Every step I took was painful. I ordered pizza and I could barely eat it from the pain of working out extensively under the sun, being awake for 24 hours straight, and partying excessively. I’m done with tours for this year I think. At least bachelor parties… we’ll see what happens.

Also. I got published on Sunday about the place in Playas that sells this magnificent Açai bowls:

My body is still achey as fuck. I’m going back to Facebook soon and I have two stories to finish. It will be interesting my return to FB. Or it might not be. I also need to work out more. So hopefully there is more soccer or other sports in my near future. I’m also down for tennis, volleyball, and basketball (golf, bowling, and others as well). But it would be nice to have a tennis friend to play every other day. I don’t even know of any good tennis courts in Tj…

The thing about deleting my FB that I didn’t realize was how much online activity is linked to my profile. Like my Spotify account, and many others where I get lazy to create an account and I just click “join with FB.” So instead of making another account, I’ve been streaming full albums on youtube. Of course I streamed a lot of math rock (especially Covet and the wondrous Yvette Young). But I also went throwback to late 90s early 2000s and started streaming RHCP and SOAD and other shit.

In that spirit (and because a friend is obsessed with Anthony Kiedis), here are my pictures of when I saw Kiedis. I have two albums of Kiedis, but I remember seeing him a few more times than just twice. But albums feature Everly Bear (his son). Both sets are from July, 2008. 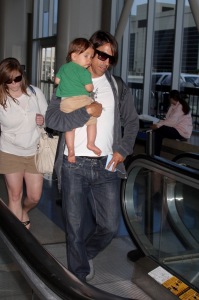 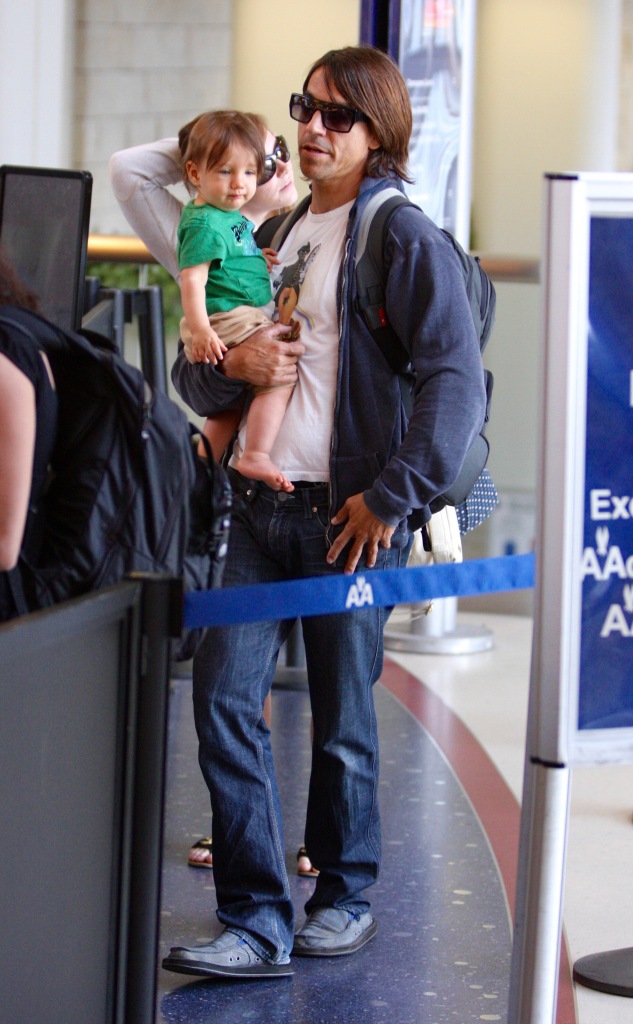 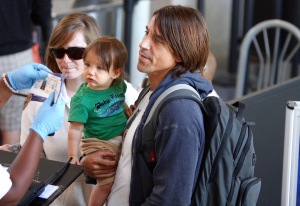 That set was exclusive and it was early in my career, so I am sure I was star struck and didn’t say much to Kiedis. He was nice overall.

This other set is two weeks later from July 20, 2008. There were other paparazzi around, but no one noticed Kiedis and Everly Bear. So I hid behind some pillars and took pics. Obviously Kiedis noticed me… and some fans noticed him. But I tried to keep it so no one except me, knew that he was there. 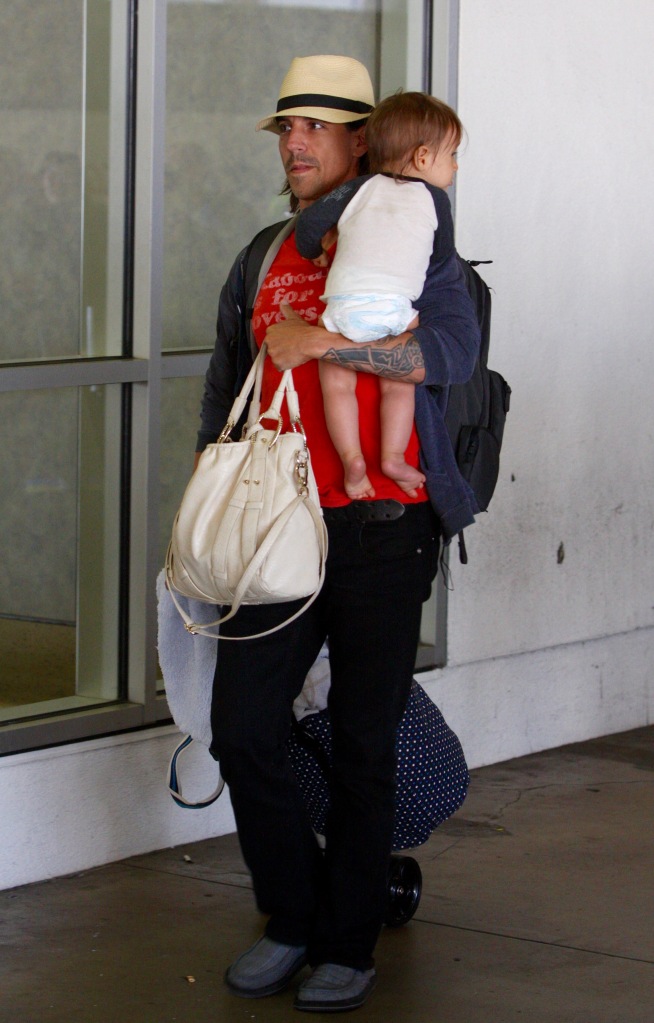 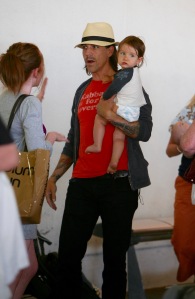 The other paparazzi figured it out after a while… But only I got the shot with Kiedis holding his baby.

Look at how fucking young I was! I was barely 21…. Obviously, because I am on the picture, I didn’t take this one. I forgot who I was working on, but I can take an easy guess. He always made me do the edit, I didn’t mind. 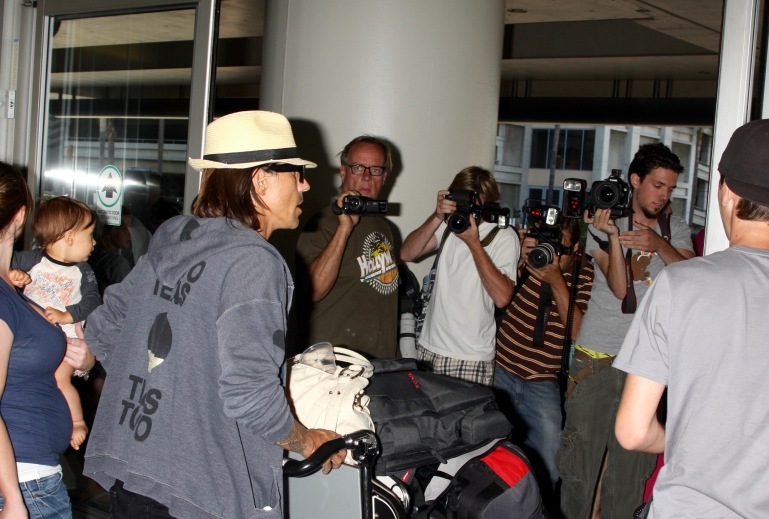 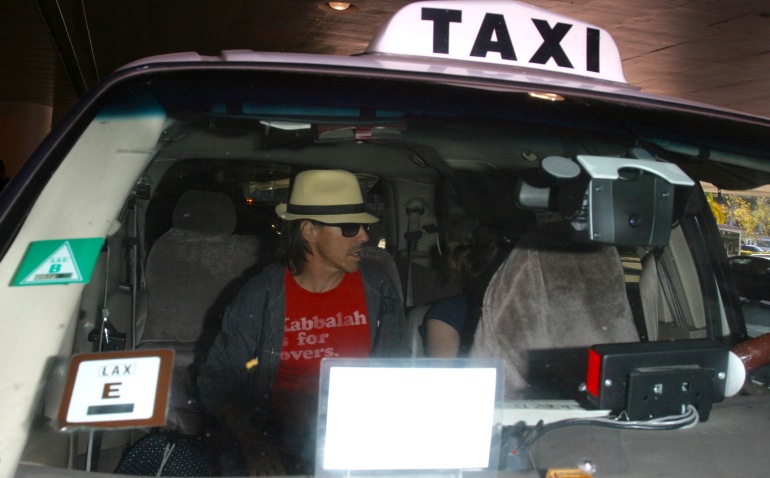 That’s all I have for Kiedis in my folder. But I remember seeing RHCP members again, and Kiedis again. But like I mentioned before, some pics are not in my hard-drive.

AND YAY! MONDAY GO! TIME TO WORK! Eat some pizza, shower, then do some real work because I got paid to do it and I’m almost done. Should be a busy busy busy week. Now I return to Facebook. Let’s see how it goes.