On my birthday, I got a couple of semi-job offer thingys. It’s been a game of patience to see if I’m getting in or not. And I am not a very patient person. I have been very anxious to get to work more so I can make more money and lock myself in my apartment on the weekends, work on music and play video games (assuming I’ll have money to buy new toys). So I have a lot of work in front of me, and I couldn’t be happier. I spent all morning working and I can keep going.

I spent too much time editing pictures and narrating stories for myself without pay. I might somehow make my latest set of pics profitable, but we will see. In the mean time, I’m loving the camera. More soon.

Happy Birthday wishes on Facebook lasted until 2 days later of turning 30. On Tuesday, I did a job for a perhaps new job to see if I get a job in my new job that has a job. Ok. I don’t really want to talk about it because it might bring me bad luck. But if I am in, I would be so happy.

Anxiety and Tap Tuesday made me leave my apartment in search of beers to comfort my impatience. I’m still anxious. I typed what I meant to be an article for Tijuana Adventure on my phone. Chad and Bobby Bray joined me drinking in Plaza Fiesta and I stopped. I promised myself I would finish later. I haven’t.

Wednesday and Thursday I worked on a story that I finally sent on Friday and got published today. The march against homophobia prompted me to look for sources to complete my article. This is it. I also did a lot of redditting those days because I can’t stop trying to get at those imaginary sweet karma points in my forever attempts to get at the front page and get that shot of internet adrenaline.

On Friday I also had a Tijuana Adventure with a client that found me on Reddit and messaged me on Facebook. Though I keep saying I am changing my tours, it’s hard to deny a private tour request. I did ante-up my price and switch the way to give a tour, I should carry my camera every time. I will post the album and story on Tijuana Adventure when the client responds if I can publish the pics.

Like always, it was fun times and the money I got from the tour was very needed for the next day camping at In-Ko-Pah. After the tour I sat down for a couple more beers at my favorite place, read Vonnegut before headed back home to get ready for camp time.
Saturday was pretty wild. I crossed the border early at 9ish am to be in Golden Hill at 11 am. I had one of those wondrous shitty breakfast sandwiches from a gas station because I love the taste of burnt rubber in my mouth and started my trek up to 30th and Broadway. There I met up with the roommate, his girlfriend and Justin, our Uber driver.

Pictures in this case help narrate the story better instead of just rambling about what we did:

The location of the festival was amazing. A bit north of the US border, between Tecate and Mexicali are the In-Ko-Pah mountains. A crazy place with tons of gigantic rocks. The major reason I wanted to go was to take awesome night photography which is my obsession right now. I was ill prepared for what came that night.

The festival started with Some Kind of Lizard, a band by some friends here in Tijuana. The bass player was stuck at the border line and it didn’t seem like he was going to make it to the show. Since I subbed for him months before (though we only practice once), I subbed again. I played a small music festival! By accident!

10 minutes before the show I jotted down the chords on my cellphone and … improvised the whole set. It went well except for the last song where I wrote the wrong key and took me a while to figure out wtf I was doing. Also… I’m such a wanker (as my roommate would say). I added so many extra notes and even did some tapping in what is slacker punk rock. I almost slapped da bass in one of the songs, but decided against it (whewwww).

The rest of the line-up seemed promising, but heavy winds worried me. Everyones tent was blowing away, a lot of people slept in their cars. Instead of enjoying the bands, I kept busy making sure my tent didn’t fly away, thinking that the wind might die down eventually. It never did. It just kept getting WORSE and WORSE. So I missed a lot of the festival, but the little I could enjoy was great. I dealt with the cold with alcohol. I couldn’t take the pictures I wanted. I tried sleeping around 1 a.m. but it felt like wind torture. The winds, blowing over 50 mph in every direction, made it seem like I decided to camp in the middle of a busy highway intersection.

The only thing keeping my tent grounded were the heavy rocks I placed in each corner and myself. A tiny bit of fabric ripped in one of the corners. The tent resisted, but it was a difficult sleep. It made me want to go camping again and try harder to take pictures. There are nature photographers that go through worse, and I am ready for it, this time, I was ill prepared and didn’t imagine the cold harsh wind.

Sunday night was awesome. Day… not that much. It was just picking up camp and headed back home with an achey body. I napped. And napped hard. Woke up to some tv and then to go see a show. INUS, Angel Peralta Project and Horse Lords. All of them were amazing great music. Or the type of music I like. INUS in particular was insanely awesome and I am glad I’ll get to see them a lot in the following days. I wanted to take my camera last night, but I was SOOOOO tired and already had over 700 pictures to go through.

I worked all day. Many emails. Many writings. Trying to not get absorbed by reddit. Which reminds me, I posted about the next reddit meetup, which is this Thursday. I am trying to do to many things at once. It’s cool, but a bit overwhelming. I know I can do this.

I am tired and already went through so many pictures and written over 1,000 words in this blog post. But I must publish more celebrity stories from my past.

Last post talked about how I got along with Nikki Reed. Well, my brother got along with the McCord sisters. I did as well, but my brother was better at taking the relationship to the next level. I saw a post on TMZ about Rachel McCord, well, this is about the trio.

I got along with AnnaLynne, the most famous of them all. I remember she was trying out for Twilight but didn’t make the cut. Then she started dating Kellan Lutz, who also was always a very nice guy.

I have this set with all three sisters. I have many more folders with pics of AnnaLynne, but I am not going to go through all of them and edit that shit. That’s too much work and I am already in dire need of getting out of my apartment and getting a beer to maintain my sanity levels.

Pictures are from January 13th, 2009. I have little memory in how I ended up following them. I think I was working with my brother in his car back then. I was a shitty shooter judging from the pics… 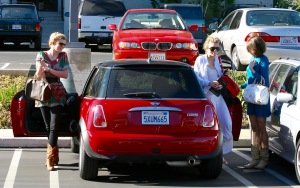 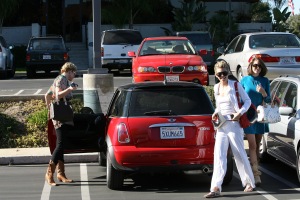 So instead of going through a lot of AnnaLynne pics, just two sets, the one above with the whole trio and another one with just Angel I never really talked to Rachel and IMO, she is the prettiest one. But this story is more about the oldest (I think) and least attractive (IMO) McCord sister, Angel.

I woke up early one day in West Hollywood when I was still living with my brother to find a topless Angel outside my door. Oopsie. She was doing her own make-up on the hall next to the bathroom (it had the nicest mirror). I wasn’t supposed to see that. I apologized and went to the bathroom. After coffee, I figured out what was going on, my brother that forgot to warn me, he was having a shoot with Angel. I tried not have to do anything with this craziness, but ended up taking “behind the scenes” photos of the photos. Ever since I started taking pictures, I like taking pictures of people taking pictures (dumb, I know). 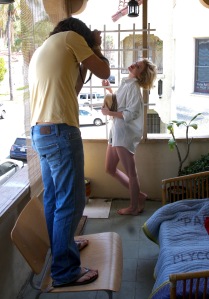 After taking those pics, I remember I had to go to work. I have this pic in my hard drive I don’t know why. But I guess it was my brother’s pic of the shoot. Angel almost naked, B&W, way bright and holding a terrified cat.

Ok! Now I am hungry and I still have a bit more work to do. If I keep up the pace, I will have steady work influx soon! Goal to write 2,00 words a day. Seems feasible! Until next Monday where I will narrate more of my chocoaventuras.