I feel like a senior in college the night before he has to turn in his last thesis. Except this time I’m not turning in 50+ pages of random liberal crap like I used to spout for my Resolution of Conflicts minor… I wished I saved my senior theses, I bet they were horrendous. I wrote two different 50 page, one 30 page and one shared 50 page with a team of four, fuck working in teams (it was about saving the whales).

April looks promising. There is a lot of good stuff that will be happening (I hope and I am sorta nervous for all of it). I haven’t seen this much work laying on my desktop in a while. It’s a bit of a clusterfuck, but I’m getting it done one by one. It will be a very busy month. I have a lot of ideas for larger articles and I plan to do major changes to Tijuana Adventure.

March was difficult, but March is also almost over. I spent most of it being broke and stressed while working and looking for a job. It wasn’t until this last Tuesday that I finally got a decent paycheck. I paid a little debt that I had, enjoyed myself, and did some work. Unfortunately, the work I did was rejected and the other research I was doing prove to be more difficult than I first though (and I have more difficult research to do this week).

On Wednesday, I spent my morning doing some fruitless research and decided to go out. Found out that the awesome artist Teak (who happens to be my neighbor) painted me in his mural. His mural is about immigrants in Tijuana, Teak himself being one (and of course, myself). The mural is in Pasaje Rodriguez and it will feature video interviews of the characters painted. Later that day I witnessed Dinner in The Sky on Revolución and took a lot of pictures.

Thursday I worked on more fruitless research, that I ended up deciding switching my focus to the events from Wednesday, the Dinner in The Sky shit. Also started collecting info and pictures for a food review of a vegan place.

Friday I sent what I had work on so far on the week, sadly, this was my aforementioned rejected article. That afternoon I got more vegan food and went to Plaza Fiesta to get an interview for a re-write (more of this in upcoming weeks). I got day drunk thanks to a Quadruple Belgian beer (and others) but got great material and pictures for more work.

Saturday the same, more work. I’m glad there wasn’t soccer matches on the Mexican league this weekend, otherwise I would have done nothing but watch soccer. I went to a different nerdy/awesome restaurant to again, collect pictures and information for yet more work! I think this is the post that I have typed the word “work” the most. Then I did more nerdy stuff by going to the Plaza Friki to play Street Fighter V with my friend Ohh Wow (I kicked his ass). Got more interview material and pictures at night for more and more work I’ll be doing this week…

And guess what I did on Sunday?! I worked! I transcribed, wrote, edited, restructured and organized more WORK! Now I wished all this worked paid, but I guess that is where I’m barely getting at. Working and suffering to build a career (that hopefully is nothing like House of Cards). Tired from all the work, I napped on the early afternoon and woke up near midnight. Realizing it was Monday already and knowing that I have a lot of work to do on the week, I wrote the Monday blog post before dawn just to get it out of the way.

On my years chasing celebrities, I had a top three celebrities that people always asked for that I almost never saw. Brad Pitt, George Clooney and Johnny Depp. I never saw Depp, but I did catch Pitt and Clooney for a very brief moment each. Seriously, all I got were like 10 seconds. These people are busy. So I shouldn’t be complaining about how busy I am. I still have time to go to a nerdy plaza to play videogames…

I saw Pitt on February 5, 2011, that same day I also saw… Paris Hilton. And yes, if you are wondering, I did see Angelina Jolie (stories later).

Pitt arrived on Terminal 2, so I’m guessing he was coming from Air France. There were dozens of paparazzi waiting, but he snuck by some “not so secret” doors and only a few caught him (I had a great position). Anyway, here are the pics of the only time I saw Pitt. 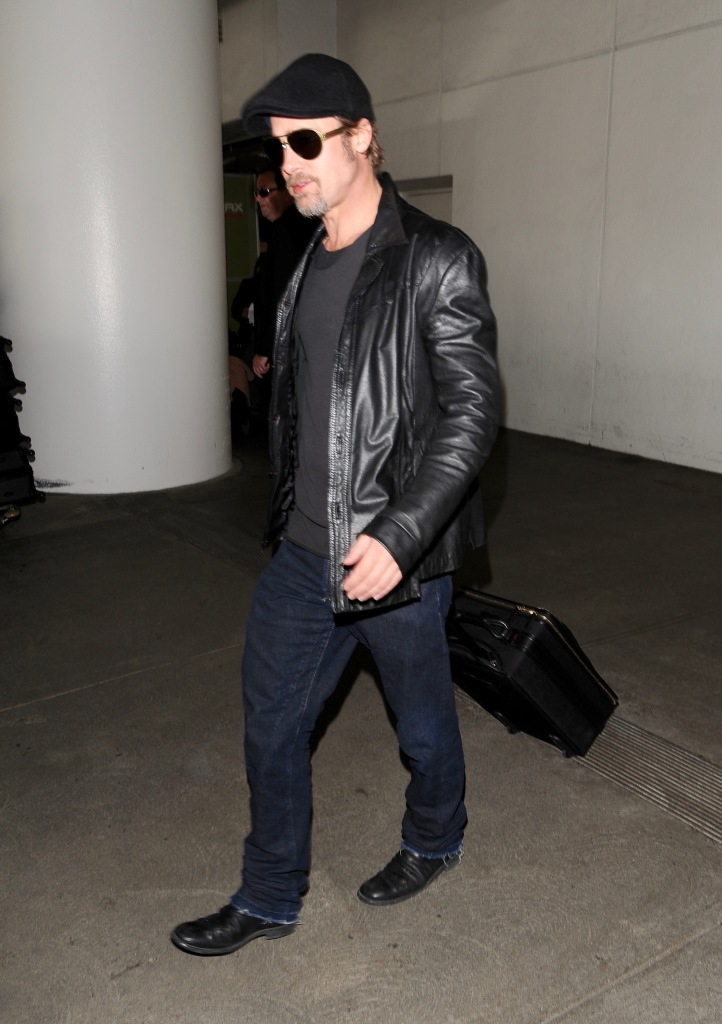 And now that I am done with my blog… I can go to bed (it’s 2:57 now) so I can wake up and do more work. I’m kinda hungry, but I’m sure that eating at this hour is not a good idea. Napping for four hours during the afternoon is also not a good idea, but I guess this is the life of a freelance.