I was supposed to have a beer tour on Saturday, but it ended up getting canceled. The San Diego Reader not only announced my tours, but it also got printed in the magazine. This is my chance to make TijuanaAdvenrture grow and to further  my career as a writer.

-Blurry picture by my roommate.

I had an awesome week in which I sort of work. A Kiwi girl visited means stayed on my couch on Tuesday. We went to Plaza Fiesta and other breweries to enjoy Tap Tuesday, when beers are cheaper than usual. It was that night that I talked to Jmar, this year’s organizer for Tijuana Rumble Fest and frontman of Some Kind of Lizard, about playing bass for his band on Saturday since his bass player was gone for a couple of months.

Jmar, Cynthia (the drummer) and myself practiced the songs only one time on Thursday. We were going to practice again on Friday, but heavy traffic disrupted the rehearsal. Instead, Jmar and myself went to jam at his friend’s house. It has been a long time since I jammed, I enjoyed it thoroughly. I forgot the beauty of playing simpler music, instead of my usual complex crap. Without really even rehearsing, the show on Saturday went great and I had shit tons of fun playing slacker punk with Some Kind of Lizard.

This next Saturday is Tijuana Rumble Fest. The Friday before it, there is a San Diego Reader holiday party. From now until then, I have to finish a bunch of articles I have been working on. I have been working on a beer guide for Tijuana for 2016 that will hopefully get accepted. Since my rommate was out of town, I also returned to using his SLR. I went to Plaza Friki for a nerd cosplay party to take pictures and write about the place. Here is a gallery with the pictures through imgur:

Finally, the celebrity post of the week, Salma Hayek.

Salmita was never nice to me. Talking to her in Spanish wouldn’t help either. I mean, why would you be nice if your husband is worth $15 billion. I also saw Mr. François-Henri Pinault, he was actually nice. These pictures of Salma Hayek and her daughter, Valentina Paloma, are from January 19,2009:

I took the pictures, she got in her car and I got in the elevator. She thought I was gone, but I was hiding, so she got out of the car to have a cigarette. Celebrities hate it if you take pictures of them smoking.

And then she played an adorable game of peek-a-boo with Valentina (while still smoking).

Salma arrived from Air France on March 11, 2009 but I barely got any pictures. It was more important to follow her so we could find out where she lives and what cars they drive.

After that LAX shot, I was sent to cover Salma for a while. It was one of those rare occurrences that I wasn’t working at LAX but actually doing real paparazzi work. You know, real stalking. The house of Salma was on a closed street in Bel-Air, so she was easy to follow. I worked this job with a guy that worked as a paparazzo for only 6 months, but it was too stressful for him so he gave up and decided to just work as a waiter. 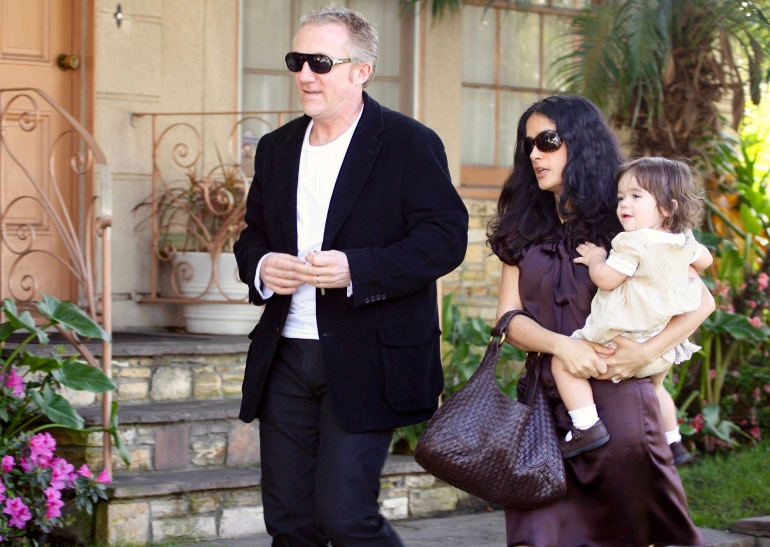 The last time I saw (from what my hard-drive tells me) was on April 8, 2009. She was flying Air-France with her sleepy baby on her arms.

The blog was one day late! But on Monday I was working on writing stuff that actually pays me $$$ instead of my silly blog.