I hate work, most people hate work and I am like most people. However, I am by far on the side of people that enjoy their work, except you know actors and rockstars, I still simply prefer doing nothing. When I lived with my uncle for my senior year in High School, he told me I had potential, but I had to promise him not to be lazy. I couldn’t keep that promise. I am a lazy guy. I am so lazy, that somehow I figured out how to make a living being lazy. It’s not a good living, but you know, I get by.
The last post was about how I am lazy, I have work piled up and still do nothing. This last week I only send one article in and barely worked on the others (and now I have so much work this week!). At least my lazy week of barely doing any writing job got saved by a TijuanaAdventure, my other awesome job.
I was never planning on being a tour guide, it just sort of happened, just like the rest of my jobs. Never thought I would work as a lazy security guard in the art gallery, or the multipurpose dude at the kitchen, to end up at the music department office as an errand boy. Those were all my college jobs, so they do not really count. Before graduation I was already a paparazzo… After that, what I do now, writer and tour guide (+ some random other jobs). Hopefully someday soon I can add my other passions, music and photography (and others…)
Speaking about being a tour guide, I had another wonderful day of touring around Tijuna and showing a couple from San Diego/Australia around. Whenever I do a tour, I always have a worry about what if my clients aren’t cool or weird or something, I am always so wrong. It always turns out to be really interesting people that I would love to hang out with any given day…. PLUS I get paid!?!?! To be honest, I always hate that part, charging people to have fun with you seems really unfair, but most people are usually so appreciative that they feel like I actually don’t even charge enough….

Our adventure started early, ended late, and got interesting right from the beginning. At 10:30 a.m. I was already at the meeting spot, and they were already there. During the brief introduction Wendy’s accent gave her away as an Aussie, her husband is from North County San Diego. First place we stopped by was to a new mural by Panca and Half-asleep. The neighbor of the mural, an angry old lady, started yelling at us about how the mural was horrible and she wanted it remove (I probably will write an article about this).

After that interesting encounter, we walked to Caesar’s Hotel to check-in and after that to La Cevicheria Naiz for breakfast and beers. That place never disappoints.

From there, we Ubered to Playas de Tijuana (aka Playami). As we arrived, we saw a commotion on the border wall. Apparently someone tried to cross the border by swimming across, more Tj adventure madness!!! We strolled on the boardwalk and then had beers at a beachfront restaurant. Playas is still lacking quality food/bars, except a pizza place, but no tourist wants to eat pizza in Tijuana…

Ubered back to Plaza Fiesta, aka Plaza Brewery for more beers. This place is amazing and I will certainly be writing about it for the Reader soon (if they accept my pitch…). We drank at Fauna, El Tigre and finally at Madueño, a place getting ready for their grand opening, so we were literally their second customers in there (and they had great beer). 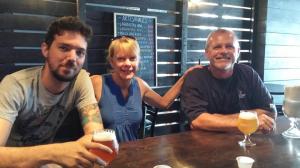 We ubered to Telefonica, a food garden with a variety of food choices and of course, more beer. After eating like kings, a walk was in hand to relax a bit, so we trotted back to downtown.

More beers are Mamut, which by now is a classic Tj brew stop. Then some more beers at BajaBrewLabs, a hidden brewery with a ping pong table. We strolled Zona Norte (the red-light district) just to check it out (didn’t stop at any bar) and headed down to sexta, the main party street.

And like always, Tijuana on a Saturday was going heavy with parties everywhere. We went to La Mezcalera for a whole series of mezcal shots, then went through their backdoors to unveil the new bars. This place also never disappoints, and is always a good way to either start or end the night. We chose the latter. Twelve hours of partying in Tijuana and not only they were tired, I was already to crash. We ate street tacos at Las Amigas, which is also always a hit and walked back to the hotel…. I thought of continuing the party, but I decided to simply walk home.

Wendy and Wayne were really awesome that they did me the favor to email me all the pics of the adventure and you can also check them out in their travel blog here: http://www.travelpod.com/members/waynenwendy
To see all pictures or book a tour with me in Tijuana, click here.

And finally…. Chevy Chase. Who has nothing to do with whatever I’ve been saying except that I am lazy. I feel like no one has it better to do nothing and be lazy like famous people from the 80s. I saw Chevy Chase a few occasions, and he was always a bit weird. I didn’t choose this week’s celebrity. I was leaning more towards choosing girls that were incredibly beautiful in person, like Victoria’s Secret models, but I have a lot of pictures of that and I got lazy, so instead I asked a random. The random, who happens to be Dan Brozo, said a celebrity I had no idea who he was,  then his second choice, Chevy Chase.

Watching 80s movies on Netflix is one of the best ways I procrastinate, so I have been seeing Mr. Chase in movies lately. In person, he was always cool. The only set I remember it was weird and goofy was when he pretended he was pissing on a garbage can for no reason, however, I didn’t find these pictures. I found these two sets that I really have any special memories about.. I mean, I was shooting like 10+ celebrities a day…These pictures were taken on October 5th, 2009. TSA scanner checked Chevy Chase as if he was the next threat to national security. Seriously… I watched TSA for 3+ years everyday. Such a waste of tax dollars. 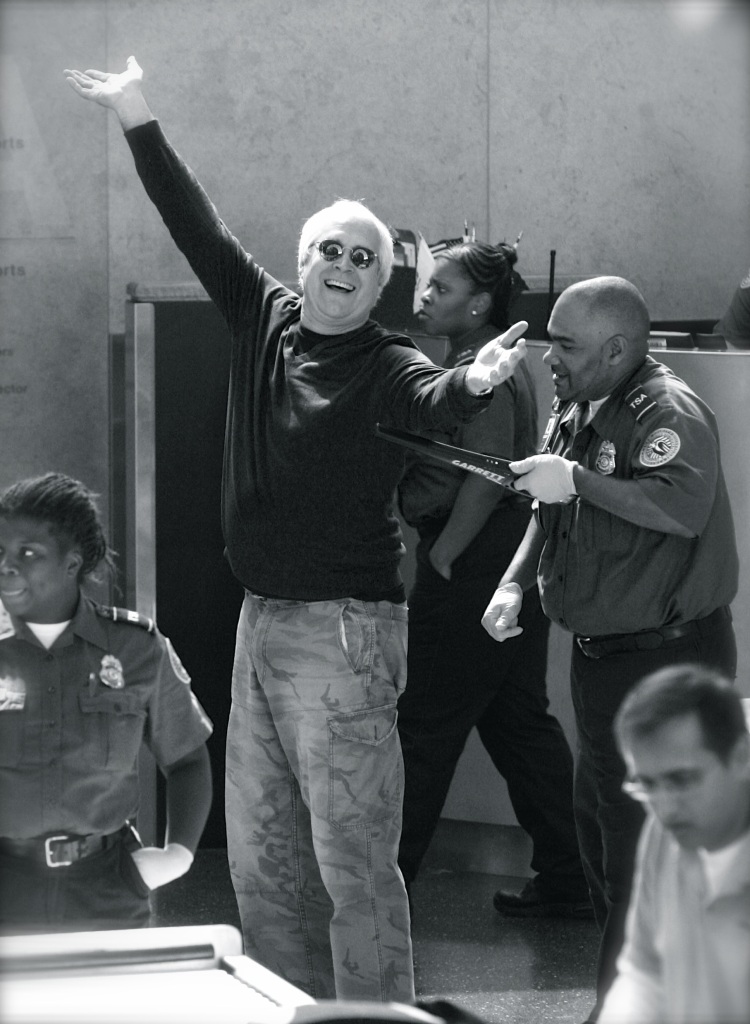 The other set I have of him is from November 28th, 2009 and there is only one good pic! I am sure I saw him more times but like I said before, sometimes I would not bother to save all the pictures in my computer and I would just send my memory card straight to the office…

Again, I was one day with the blog post… sorry about that me! I have a lot of work ahead of me this week so I better get at it!