2015 is around the corner. My thirties are coming up soon. And I am still wondering what I am doing with my life.

That’s what my life looked like on February 2011, a few months before quitting my job. That was the last month I had LAX duty and after that I relinquished to freelance street status. I checked many online magazines and blogs daily to find my pictures and screen cap it. Then I would check every publication to find it on print and would buy the magazine. I stopped doing this after a while unless it was a major print. 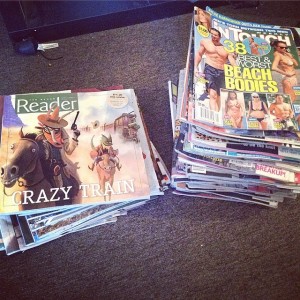 The pile on the right are all tabloid magazines with printed pictures that I took. The one on top has my Lindsay Lohan cover from Hawaii.

The pile on the left is the San Diego Reader who has been publishing my articles as a stringer for a little bit over a year now. (profile: http://www.sandiegoreader.com/staff/matthew-suarez/)

I never really thought I would make my living off of magazines.

Facebook tried to summarize my year in a single post. It was nothing like what I remember 2014 being. So much shit happened this last year. Though it was a rough year, I am optimistic about 2015.

– In the beginning of the year I was really excited about being a published writer that I was writing about anything. I even got published in Spanish for the news blog – B1mas4 (a non-paying gig). I also did a bit of ghost writing. I was a bit heartbroken, working a lot was a great distraction.

– In April I got my cat who is sitting on my lap right now. Mr. Andmew Meowricio Pollock Bisholino II:

– In May, I was one of the three main organizers for a music festival, the Tijuana Rumble Fest. It was one of the toughest and most stressful things that I have done in my life. Also, my nephew was born… 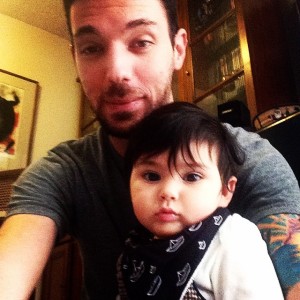 …and now he is gigantic!

– In June and July I did nothing but watch the World Cup. Got a little money from getting published and also from giving tours with Tijuana Adventure. I met people from the UK, Australia, France, Nigeria, Hong Kong, Japan, Scotland, Israel, Canada, and of course, plenty people from all over the USA.

– In August I kept meeting people from around the world, but living as a freelance writer got a little bit harder when the SanDiegoRed told me they could not pay me anymore (SanDiegoRed is a news blog based in Tijuana that also published me).

– In September I got a job in the USA in retail at a soccer shop in San Diego. It is my first regular job since college. I have to cross the border 4 or 5 times a week to get to Sport Zone. So far, I have enjoyed working there and it has given me a better understanding of border living.

– The highlight of October was that my college roommate came to visit for his own TJ Adventure. We learned that we cannot drink as much as we did in college, but holy fuck did we have fun. He recorded this video of some Tijuana biker crashing on Halloween night.

– In November, I didn’t shave.

– December is now and it is almost gone. So much has happened that my paparazzo days are almost forgotten, but then I receive a letter from an actor “with a big following on Instagram…”

It helps looking back, just not the way Facebook presented it to me. Reviewing my past just help me decide what to do in the future. Maybe I can do this once a week and actually post on my blog on a regular basis. After all, I pay around $20 a year to keep this site, might as well juice it. There is no one editing me and most people that read me are clicking on that same reddit IamA.

Music has been a bit left behind, but a couple of shows with my band Donkichow did happen. Classical guitar is going to be a bit ignored while I concentrate on writing more math-rock songs because playing live is the fucking best.

For those who read, thanks, I do appreciate it.