And I found out about it because Orlando Bloom was on the Colbert Report. That’s how out of the loop I am and how bad I can be with catchy celebrity news titles. But hey, this is not about the celebrity, is about the experiences I had with them, so yeah, it’s about me.

As a huge fan of Lord of the Rings, I love the work of Orlando Bloom as Legolas. I even enjoyed the Pirates of the Caribbean movie. I know its movies, but I saw the first one and never saw the rest.

I’m also a huge fan of Victoria’s Secret and all the models that work in there. They were all very nice and I got to take pictures of them and chat for a bit. Miranda Kerr was one of the nicest ones, but Alessandra Ambrosio, Adriana Lima and even Gisele Bundchen were very nice. Even Tyra Banks was cool when her wig was on straight.

Anyway, I saw both of them multiple times. Orlando and Miranda together were hard to get. They didn’t like to be seen together, at least Legolas didn’t.

When they were together, they liked to walk separately or never be in the same frame. So I never really got a good picture of them holding hands.

I saw them together again a couple weeks later. Again, they walked separately but for a brief moment Orlando stopped to grab Miranda’s hand. Unfortunately, he wasn’t looking forward and only got the side of his head. Picture is worthless. Of course he smiled once he was in security and Miranda wasn’t nearby. 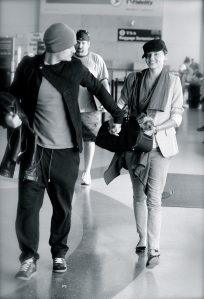 The first time I saw Orlando was completely by accident. He was what we in LAX called a “wild animal”. He was walking by himself from an arrival flight towards baggage. I took a couple pictures and told him I was going to leave him alone so he could do his thing. I followed him, he ran and disappeared. Till this day I wonder what he did… 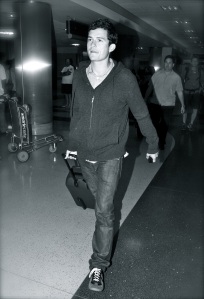 A lot of paparazzi were here for him this other day. He kept it cool.

I really don’t remember this particular day. I had just switched agencies and I was working by myself. Which meant I was on the shy side and not really being that invasive of the celebrity’s space.

This was him arriving to a wall of autograph collectors.

March 19, 2010… Ok, you can only see one collector. But the pictures before this one had over 10 of them swarming over him for an autograph.

I saw her much more than Orlando. She also loves the camera much more than him, after all that’s her job. Not only did I get her pictures, I also got her on video. TMZ even took what I said and made it theirs… Well, they did that all the time and I really didn’t care.

This was the first time I saw her and she appeared to have nothing on but a trench coat. And like the TMZ later points out, Miranda is pretty, gorgeous and even funny. When the TMZ lady says “then we start to hit on her and ask her if she has a sister…” that wasn’t TMZ saying that. That was ME! After that Miranda says “I have a gay brother, that’s for you!” Again she was talking about me. ME ME ME ME ME. 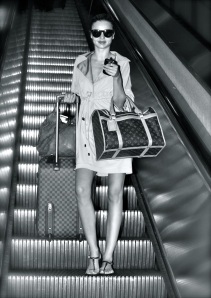 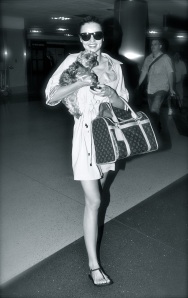 Then I saw her departing at midnight. I was solo, so again I was a bit shy and just did my job in the shadows. It was dark, I didn’t use flash and I kept my quiet distance, so the pics weren’t that great.

And once I spotted her when she was already through security. So again the pictures were worth nothing.

She’s so damn pretty and photogenic that even her dog turns great in her pictures. Even when her back is towards the camera, her puppy Franky, pops out of her bag to smile. This particular night she arrived in a great mood and greeted photographers and autograph collectors. 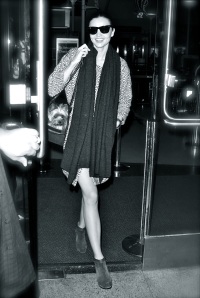 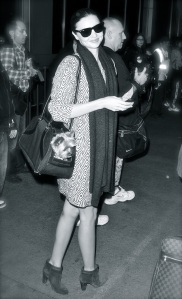 Then one day, and the last time I saw her, I decided that taking pictures wasn’t good enough so I decided to make a video and see how my luck went with Miranda. So I did this video asking her if she preferred Orlando or Franky. She didn’t answer… but now we know who she prefers.